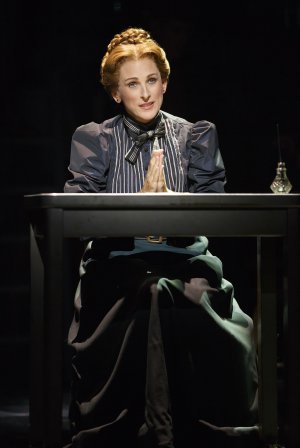 It is generally bad reviewing practice to allow past productions of a show to influence the critic’s response to a new one, and yet it seems impossible to examine the merits and deficiencies of today’s Spring Awakening—Deaf West Theatre’s revival production currently on Broadway—without doing so. Fewer than ten years have passed since the riveting original production swept the 2007 Tony Awards and, despite its melodramatic heavy-handedness, became a critical hit and a musical theater phenomenon. I am here to silence the cries that it is far too soon to justify a revival by assuring the naysayers that the show presently on the Brooks Atkinson Theatre stage is an entirely different one. With the goal of blending artistic merit with widespread accessibility, this production combines a cast of deaf and hearing actors to present the entire text in both spoken English and American Sign Language. The result is a more intriguing, if less emotionally affecting, production than its previous iteration.

It is worth noting that Spring Awakening the musical has always been a sort of revival. Based on the 1891 Spring’s Awakening by German expressionist playwright Frank Wedekind, the 21st Century musical version follows the same plot: various children come of age in a provincial town determined to shield its youth from the topic of sex. While the brilliant and rebellious Melchior learns the biological facts of procreation by consulting books, the equally curious Wendla is fed evasive lies by her mother. Melchior’s friend Moritz is similarly confounded by the new urges his adolescence has presented him and consequently experiences fits of depression. Joined by their fellow classmates, the three fumble through their sexual awakenings with tragic consequences, culminating in a clear moral question: “Are we so afraid of the truth we will join the ranks of cowards and fools?” 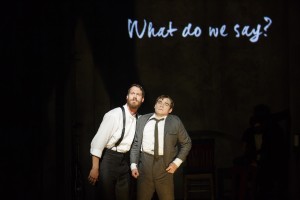 What I find curious about Spring Awakening and the constant buzz surrounding any major production of it is that its script is less a work of adaptation and more a work of translation. Retaining the vast majority of its source material, the musical forcibly jams its songs in between Wedekind’s almost entirely intact scenes. Duncan Sheik’s variously chilling and elementary soundscape paired with Steven Sater’s only sporadically coherent lyrics perhaps do well to evoke the show’s emotional undercurrent, but they do nothing to further the plot or provide additional insight. While lines such as “Consume my wine, consume my mind/I’ll tell you how, how the winds sigh” bear little discernable meaning, they succeed at mimicking the sort of bad poetry a frustrated fourteen-year-old might write. Likewise, this added musical material fails to address the problems presented by the original script’s haphazard structure and weak character development.

In this case, director Michael Arden’s commitment to concept transforms what could easily be a muddled melodrama into a successful night of theater. Embracing Deaf West’s commitment to providing professional, engaging theater to all audiences, the staging is in itself a poetic mesh of singing and signing. Arden parallels the adult characters’ attempts to stifle adolescent expression with our often ablest society’s tendencies to privilege verbal communication. Spencer Liff employs the tactile nature of American Sign Language in his sensual choreography. Sound designer Gareth Owen amps up the band’s bass levels and pounds them into our bodies, asserting that some sounds are better felt than heard. While this unique staging presents some unanswered dramaturgical questions (Is Dane Laffrey’s setting supposed to suggest a real world deaf education situation or is it meant to be understood in more abstract terms?), the production’s visual merits render them unimportant. 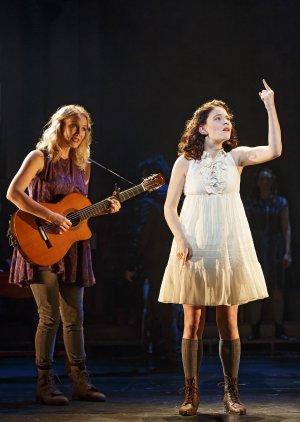 Aside from its notable staging, this production is also receiving a great deal off attention for facilitating the Broadway debut of Marlee Matlin, the only deaf Academy Award-winner to date. While her role as several of the town’s adult women is not a particularly weighty one, she imbues them with her characteristic fervor. Sandra Mae Frank and Katie Boeck work well together to share the character Wendla; Boeck’s voice fluidly pairs with Frank’s signing to separate the inner turmoil and outer façade of a character whose mother refuses to listen. Likewise notable is the always-wonderful Broadway and television veteran Krysta Rodriguez, whose portrayal (both sung and signed) of Ilse, a homeless bohemian clinging to her sanity, is uniquely dark and dangerous.

Thanks to its radical re-conception of the text, Deaf West succeeds at mounting a Spring Awakening entirely different from what we saw just under a decade ago. This is a more mannered, less in-your-face take. Where the original production relentlessly packed an emotional punch, this one thoughtfully poses questions.