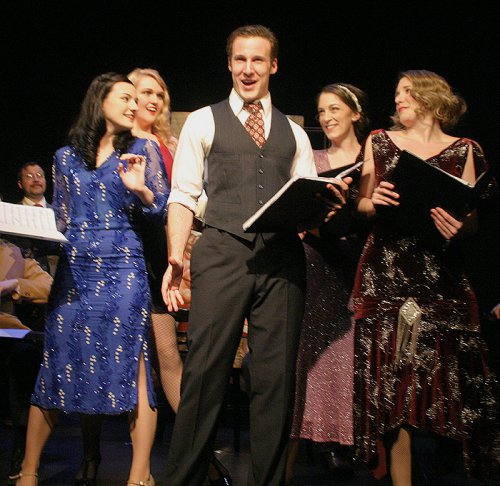 No wonder The Gershwins’ Pardon My English is not better known! When it turned out that the dual role of British spy and German bootlegger written for English musical revue star Jack Buchanan was not right for him, he bought out his contract, but not before much of the material had been rearranged and reassigned. However, by then one writer and director had left and several cast members changed. At each of the stops on the pre-Broadway tour (Philadelphia, Brooklyn, Newark, Boston) more heads rolled as the focus had been lost. The show that finally came to New York had little resemblance to the one they had started with, and not surprisingly, failed.

Ironically, the only script that has survived is the original one by Herbert Fields (Annie Get Your Gun) and Morrie Ryskind (Pulitzer Prize for Of Thee I Sing). Musicals Tonight! is giving this pleasing confection its second outing (since New York City Center Encores! reclaimed it in 2004) with a delightful revival marked by a top-notch cast of comedians. This rarely heard Gershwin score (which premiered “The Lorelei,” “Isn’t It a Pity,” and “My Cousin in Milwaukee”) is filled with musical riches, both famous and forgotten including two witty songs cut out of town, “Freud and Jung and Adler” and “He’s Oversexed.”

While the plot is as thin as air, it was also extremely topical for 1933. It is a musical satire of Prohibition, Dr. Jekyll & Mr. Hyde (which had just won Fredric March his first Oscar), Warner Brothers gangster movies, psychoanalysis and the then dying art of operetta (listen to Gershwin’s parody of Friml’s Rose Marie in “The Dresden Northwest Mounted”), and its first audience would have gotten all of the jokes. According to Pardon My English, it is 1933 and the German government has outlawed soft drinks in order to promote the sale of beer and wine. Golo Schmidt, six months in Dresden, runs Klub 21, a popular speakeasy, with entertainment by his girlfriend and chanteuse Gita Gobel. The local commissioner Bauer (with an extremely marriageable daughter named Frieda) is always on the lookout to catch him selling soft drinks in order to shut him down. 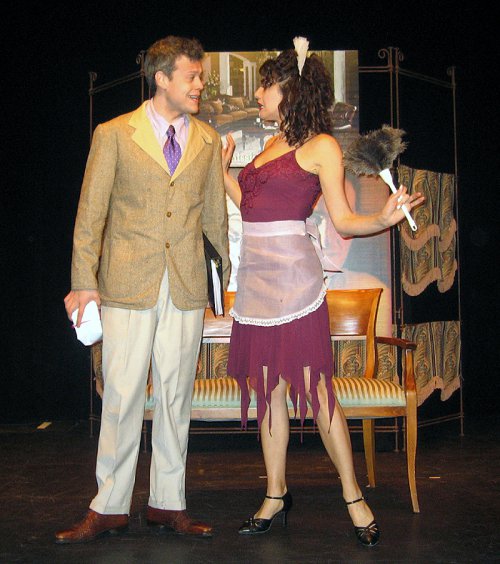 Blake Joseph and Stacey Harris in a scene from The Gershwins’ “Pardon My English” (Photo credit: Michael Portantiere)

However, Golo has a split personality: whenever he gets hit on the head (which happens in this show at regular intervals) he turns into British spy Michael Bramleigh. He is recognized by fellow British spy Dickie Carter who conveniently (or inconveniently as the case may be) falls in love with the Bauer’s maid Magda while Michael falls in love with Frieda. However, Golo and his gang decide to kidnap Frieda who isn’t sure which man she likes better, Michael or Golo. Official City Psychiatrist Dr. Steiner tries to sort out his problems. It all works out happily along with several other people discovering they are not who they thought they were.

Director/choreographer Thomas Sabella-Mills has outdone himself in his casting and locating new discoveries for this musical comedy. In the dual role of Golo/Michael, Tyler Milliron is a real find. With an exuberant personality, this tall handsome leading man is an excellent comic, actor, mimic, and dancer and has a large baritone as well. Switching from the tough guy bootlegger to the British dandy in an instant, he is first-rate at both. While he appears to have no New York credits, he should be in great demand in the future. He is surrounded by a bevy of beautiful and talented women, notably Amie Bermowitz as the hot-tempered Gita and Jillian Gottlieb as the demure Frieda.

Bermowitz who wowed in Musicals Tonight!’s revival of Whoopee proves that was no fluke as she burns up the stage once again as the fiery nightclub singer and gives powerful renditions of “The Lorelei,” “My Cousin in Milwaukee,” and the title song. Gottlieb holds her own in this company as the seemingly coy and sedate Frieda who does know the score. She and Milliron make beautiful music with the duets, “Isn’t It a Pity” and “Tonight.” 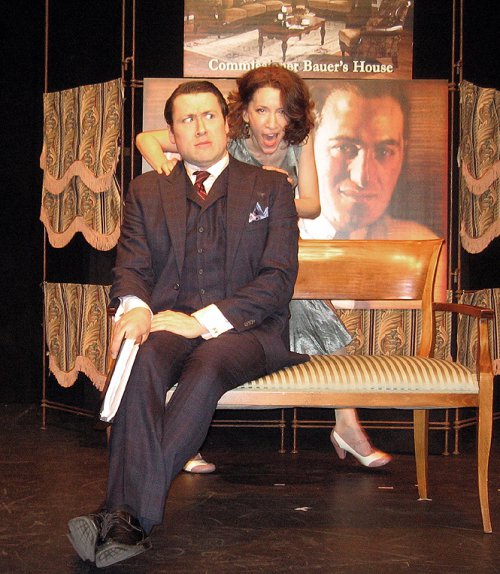 Colin Ryan and Amie Bermowitz in a scene from The Gershwins’ “Pardon My English” (Photo credit: Michael Portantiere)

Much of the low comedy falls to Colin Ryan as Police Commissioner Bauer and he makes the most of his farcical opportunities. Stacey Harris makes the sexy Magda entirely seductive and also demonstrates perfect comic timing as do all of the cast. Blake Joseph who played the Eddie Cantor role in Whoopee is very convincing as the upper-class Englishman Dickie Carter. In this company David Gautschy can be forgiven for not making more of Dr. Steiner, the Freudian psychiatrist (it is really a role for Groucho Marx), but he and Michael Montague, Ryan Rhue, and Michael Yeshion as other medical “psychos” as they are called have a fine time with Ira Gershwin’s witty “Freud and Jung and Adler” and “He is Oversexed.” As Bauer’s sidekick, T.J. Mannix survives as the butt of all the jokes as the dim-witted Sergeant Schultz.

Pardon My English is not for the generation brought up on Sondheim and concept musicals. However, for pure slapstick fun and a tasty score of unfamiliar Gershwin songs, it can’t be beat. Musical director and vocal arranger James Stenborg has a joyful time accompanying the cast throughout with the catchy and syncopated rhythms that range from romantic ballads to patter songs and parodies of various recognizable styles.