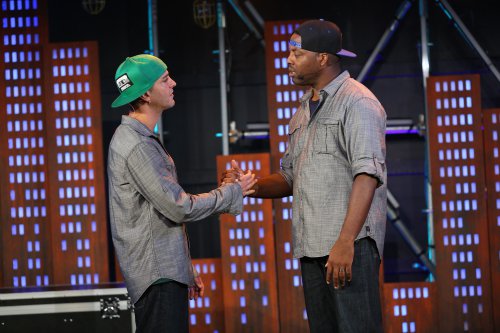 GQ as Iago and Postell Pringle as Othello in a scene from “Othello: The Remix” (Photo credit: Carol Rosegg)

Okay, I admit that I am not a fan of hip-hop, rap or any of its variations, but I am a fan of Shakespeare and Othello, and hoped that Othello: The Remix might just be a fresh take on the oft-performed tragedy—and this fit the bill perfectly. Written, composed and directed by GQ and JQ, Othello: The Remix is a funny, quick-paced modern retelling of the tragedy set in the world of rap stars, recording studios and the party scene.  The rhymes come swiftly, showing off the intelligence of the two writers.  They are able to both make fun of Othello and the business they’re in while still loving both to death.   Their take witty pot shots at other pop stars and the machinations of Shakespeare’s convoluted plotline are all quite clever.

Othello (Postell Pringle) is the lead in a rap group that includes backup singer Iago (GQ), techie Roderigo (JQ) and the other backup, Cassio (Jackson Doran).  There is also a DJ (DJ Supernova) who acts as an MC, opening the show with enthusiasm.

In this smart, clever version of the story, Iago, slightly uptight longtime member of Othello’s crew believes that he is not appreciated when newcomer Cassio, a much happier rapper who just enjoys performing gets more notice from Othello.  As in the original, Iago plots Othello’s downfall by making him jealous, hinting that Cassio was romancing Desdemona, Othello’s love.  Roderigo, the nerdy techie, with a lisp and a heavy heart, also yearns unrequitedly for Desdemona. 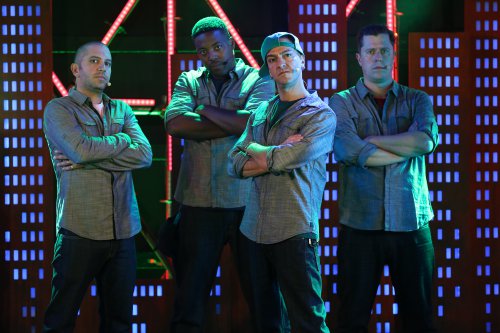 The distaff characters, Emilia (Iago’s abused wife) and Bianca (Cassio’s silly groupie) are played, respectively, by Mr. Doran and JQ who don the hilarious, colorful costumes of Christina Leinicke which are little more than aprons that hang from their necks, but do the job smartly.  Also in the play are the record studio head/tennis aficionado Loco Vito played by a similarly transformed JQ who makes this bizarre Latino thug a study in power and ridiculousness.

The final character, Desdemona’s father Brabantio, as played by GQ is a stuffy guy who doesn’t trust Othello, with, as it turns out, good reason.  (Desdemona never appears except as a pretty disembodied voice.)

The set designed by Scott Adam Davis, changes from recording studio to green rooms to posh apartments with ease.  Similarly, the sound design of David Ferdinand/One Dream and the glitzy lighting by Keith A. Truax help define where the action is taking place.

Remix moves at warp speed sometimes making the lyrics difficult to absorb, but these guys throw themselves with glee into the play taking the audience along with them.