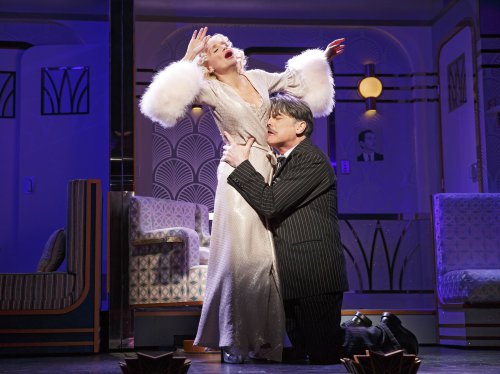 Kristin Chenoweth and Peter Gallagher in a scene from “On the Twentieth Century” (Photo credit: Joan Marcus)

You may have thought (if you have thought about it at all) that we don’t have any screwball stars today with the talents of Carole Lombard and John Barrymore who co-starred in one of the ultimate film paradigms of the genre, Twentieth Century, based on the play by Hecht & MacArthur and suggested by the unproduced Napoleon of Broadway by Bruce Milholland. Lo and behold, the Roundabout Theatre Company is treating us to a delightful, delicious and delirious production of the 1978 musical version by Comden & Green and Cy Coleman retitled On the Twentieth Century. Playing theater people with huge egos, the irrepressible Kristin Chenoweth and Peter Gallagher prove that they are every bit as good as the stars of the 30’s in this all-singing, all-dancing version – if not better.

Both stars have been sorely missed from the musical stage in recent years. Last seen five years ago in the revival of Promises, Promises,  Chenoweth seemed miscast at the time. Here as Hollywood star Lily Garland, she has met a role as big as her talents and one she was born to play. (Even co-author Betty Comden told her that). Once a regular on Broadway, the suave and dapper Gallagher has not been seen in a Broadway musical since the 1992 revival of Guys and Dolls. Together they burn up the stage of the American Airlines Theatre which threatens not to contain them. Of course, they have superior material: Cy Coleman’s operetta pastiche score in the style of Sigmund Romberg, Rudolf Friml and Victor Herbert has melodies to spare, and the witty Comden & Green book and lyrics are a scenario for the right actors to give it their all. Although the show is set on a 1932 Twentieth Century Limited train from Chicago to New York, Scott Ellis’ direction moves at the speed of Amtrak, and is complemented by Warren Carlyle’s rousing dances and production numbers.

Gallagher plays megalomaniac theater producer Oscar Jaffe (reputedly based on the eccentric director-theater owner David Belasco, but sometimes inspired by the equally notorious Jed Harris) who is down on his luck after his fourth flop which closed in Chicago at the end of Act One. When he overhears that ex-lover and now Oscar winning actress Lily Garland (whom he plucked from being an accompanist four years ago and made a bonafide stage star) will be traveling on the Twentieth Century Limited from Illinois to New York after a publicity tour for her new film, he has an idea. He orders his two “musketeers,” company manager Oscar Webb (Mark Linn-Baker) and press agent Owen O’Malley (Michael McGrath), to finagle him the stateroom next to hers in order to sign her for his next (as of yet unwritten) show. 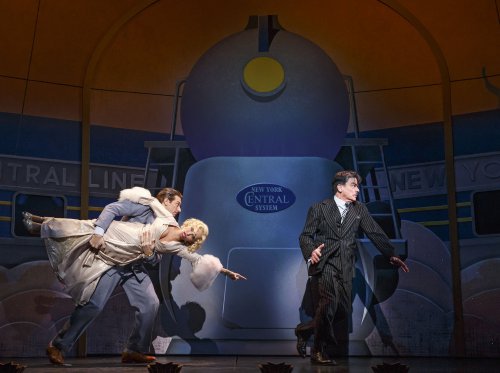 Andy Karl, Kristin Chenoweth and Peter Gallagher in a scene from “On the Twentieth Century” (Photo credit: Joan Marcus)

However, Lily is about to sign with successful producer Max Jacobs (Jaffe’s former office boy – the theater world is very incestuous) for a Somerset Maugham play and is romancing toy boy co-star Bruce Granit (Andy Karl, late of Rocky the Musical) and isn’t the least bit interested. But Oscar isn’t to be deterred – he still remembers when she was only Mildred Potka and knows how to reduce her to jelly. Aside from attempting to keep Jacobs and Granit at bay, Jaffee discovers that religious millionairess Letitia Peabody Primrose of the fabulously successful Restiva Pills company is traveling on the train and she can be made interested in bankrolling his non-existent play about Mary Magdalene, a subject which he picks out of her Bible at random. It is a role to die for and Lily is tempted – but too wise to let Oscar know. Besides she remembers their tempestuous relationship both on stage and off in the recent past. The musical takes place entirely on the train (and on an occasional station) during the 16 hours of the tumultuous ride for all involved.

As Lily, Chenoweth both dazzles and scintillates. The role exactly fits her comedic talents and her remarkable vocal range including coloratura is just what is needed for the operetta-styled score. Understanding full well that Lily’s always acting, she turns on a dime from one emotion to its opposite, continually catching us by surprise, and letting us know it is all a game to her. On stage this diminutive actress can be bigger-than-life and inhabits completely this wonderful parody of the golden age star with a capital S, both as an actress and as a singer. She wows with her first appearance as the mousy Potka in a flashback scene and then transforms into Lily Garland in the blink of an eye, a memorable feat. The evening is filled with notable and unforgettable moments from this remarkable musical star at the top of her bent. When Chenoweth lets loose first in “Indian Maiden’s Lament” and then a little later in “Never,” she has the audience eating out of the palm of her hand– just where she wants them.

Playing opposite her in an even larger-than-life role as the wily and Machiavellian producer can’t be easy, but Gallagher is well up to the job. As the ultimate ham, Gallagher’s portrayal of Jaffe runs the gamut of emotions, all intentionally fake, to get what he wants – and we know he always gets what he wants. He also has an excellent baritone and his duets with Chenoweth of “Our Private World,” “I’ve Got it All,” and “Lily/Oscar,” in which they attempt to upstage each other are not to be missed.

Also outstanding is Mary Louise Wilson, equally adept at plays as well as musicals, as the addle-headed Mrs. Peabody and she all but hijacks the stage with her number “Repent (Dirty Doings Going On).” As Lily’s not-so-smart, not-so-dumb toy boy Bruce, Andy Karl, who has played this kind of role before, makes full use of his physical attributes as he has done from his Fed Ex guy in Legally Blonde to his boxer in the title role of Rocky, at one point hilariously using Chenoweth as a barbell. As Oscar’s loyal sidekicks, Linn-Baker and McGrath make a memorable duo. As tap dancing train porters, Rick Faugno, Richard Riaz Yoder, Philip Attmore and Drew King almost steal the show, particularly with their opening number (“Life Is like A Train”) at the top of the second act – certainly no mean feat in this excessively talented company. 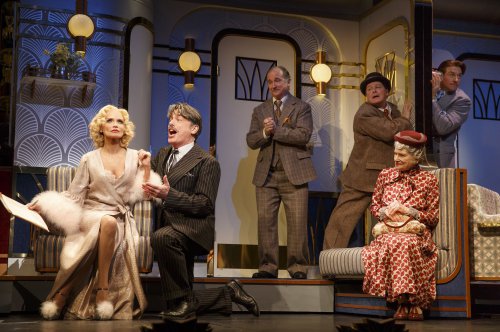 Ellis’ direction for this musical farce is pitch perfect and choreographer Carlyle, responsible for the wonderful tap-dance numbers, has great fun with the operetta parody ”Veronique,” and the 1920’s society fantasy, “Babette,” using three entirely different styles. They are ably abetted by David Rockwell who designed the elegant art-deco sets and William Ivey Long, responsible for the gorgeous array of costumes. (His gowns always make Chenoweth look like a million dollars and Gallagher’s striped double lapel suit immediately telegraphs that he is not to be trusted.)

With Larry Hochman’s catchy and melodic orchestrations and Kevin Stiles’ musical direction, the Coleman score puts its best foot forward and makes this seem like a very underrated and neglected show. Amanda Green (Adolph’s daughter) is responsible for the lyrics to a new song near the end of the show, “Because of Her,” which replaces “The Legacy,” adhering more tightly to the story line.

The best revival of the season to date, Roundabout’s On the Twentieth Century is as streamlined and fast-paced as the actual train and twice as much fun. For her soon to be legendary performance, Chenoweth should assuredly win her first and long-delayed Tony Award for Best Actress in a Musical. Don’t miss this show. It will be one for the record books.

Kristin Chenoweth and Peter Gallagher set the stage ablaze in this delightful revival of the Cy Coleman/Comden & Green musical from the celebrated screwball comedy.