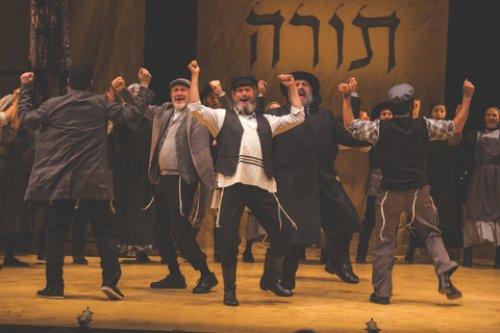 For Fiddler on the Roof junkies just getting off the high of the 2015 production directed by Bartlett Sher and starring Danny Burstein, there is cause for muted celebration: The National Yiddish Theatre Folksbiene is presenting a new staging in Yiddish (with English subtitles) directed by the Tony and Academy Award-winner Joel Grey.

Despite a large cast and an ample auditorium at the Museum of Jewish Heritage, Grey’s take on this musical theater treasure is more intimate than recent productions, starting with a stage set that consists mainly of several large, wrinkled cloths hanging from the rafters, dividing the downstage area from the reduced-force orchestra playing Jerry Bock’s music with panache and understanding ethnic color as conducted by Zalmen Mlotek.

The central banner has the word, “Torah” (in Yiddish script) written on it.  The Torah is, of course, the end-all/be-all of Jewish life with hundreds of learned offshoot commentaries telling Jews how to behave in every part of their lives.  When this banner is horribly ripped in two during a pogrom, it re-appears later sewn back together, its importance, and the strength of the Jewish people, symbolically restored.

The set, credited to the vastly experienced Beowulf Boritt, also included several pieces of wooden furniture rearranged constantly by the cast to allude to Tevya’s house, a tavern, a wedding celebration, etc.  Ann Hould-Ward’s costumes are a tad more extravagant, layered and historically accurate both for the Jews of this shtetl, Anatevke, and the Russians who uneasily coexist with them. 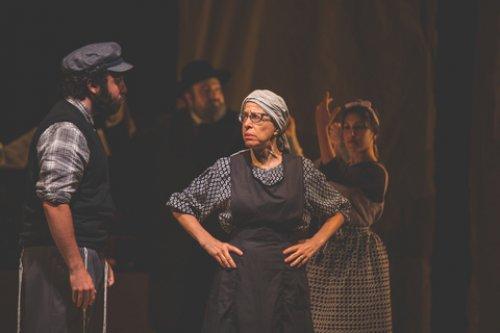 Drawn from the stories of Sholom Aleichem whose tender and haunting tales of Tevye, the dairyman, his wife and five daughters are the backbone of Fiddler on the Roof (Fidler Afn Dakh), its original libretto was by Joseph Stein, here translated smoothly into Yiddish by Shraga Friedman, originally staged in Israel in 1965.

Some witty adaptations of the Sheldon Harnick lyrics—“If I Were a Rich Man” becomes “If I Were a Rothschild”—make for a haimish, tender ambiance from the opening “Traditsye” (“Tradition) in which what feels like the entire population of the shtetl dances in interlocking circles to the final pathetic tableau of “Anatevke” (“Anatevka”), in which all the Jews, forced by a Czarist edict, traipse sadly out of their village all bent over with anguish and resolve.

Staś Kmieć’s musical staging uses bits and pieces of Jerome Robbins’ original—including the famous balancing of the bottles during the wedding scene—adapting them for a cast that is short on professional dancers.  In fact, Grey seems to have filled this cast with exactly the character types that could have lived in Anatevke.

Steven Skybell’s Tevye warms up from a salt-of-the-earth, everyday philosopher to the much put-upon tragic existential hero upon whom God—to whom he speaks frequently—has heaped much tsouris.  By the time he has lost a third daughter Khave, this time to a Russian Christian, his interpretations of the songs and his line readings are heart-breaking. 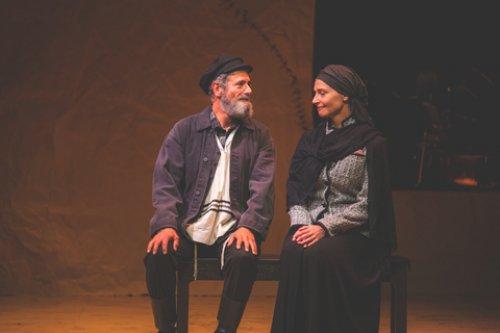 As his wife Golde, Mary Illes exudes strength yet also a gentleness when she is asked by her husband, “Libst Mikh, Sertse?” (“Do You Love Me?”).  Her three older daughters—Hodl (Stephanie Lynne Mason), Tsaytl (Rachel Zatcoff) and Khave (a fragile Rosie Jo Neddy)—marry untraditionally, not asking their father’s permission.  Each actress thoroughly possesses the nuances of her character.

Tzaytl’s childhood engagement to Motl Kamzoyl the Tailor (an exuberant Ben Liebert) forces Tevye to break a promise to the butcher, Leyzer-Wolf (a sturdy Bruce Sabath); Hodl meanwhile goes off with the revolutionary Pertshik (Daniel Kahn, charming despite his political harangues), taking her “Vayt Fun Mayn Liber Heym” (“Far From the Home I Love”).

Best of the cast is the extraordinary Jackie Hoffman as Yente, the Matchmaker—and prize-winning schnorrer (sponger)—who steals the show with a single glance and a vocal inflection.

This is a limited run with just a few more weeks to experience the charms of Sholom Aleichem in his native tongue, a staging that combines the best of the old Second Avenue Yiddish Theater with the best of American Musical Theater.