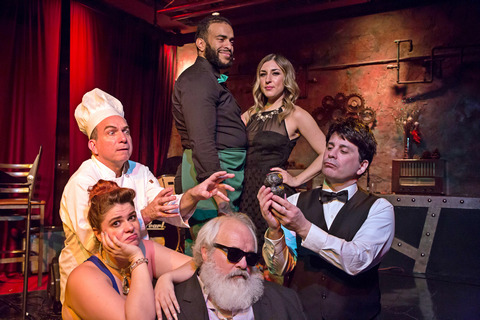 Truffles: Music! Mushrooms! Murder!!! is a dinner theater musical mystery set in the very restaurant (The Secret Room) where the audience is having dinner. This return engagement of the long-running show originally conceived by Sonia Carrion has been extensively rewritten by Gregg Ostrin inspired by characters initially created by Billy Manton, Carrion and Hal Galardi. This mildly amusing evening includes dinner (if you so choose), a score with 11 clever songs, and a murder mystery which keeps morphing into various other genres.

We are at the Donati family restaurant run by Dante and his brother Virgil, with the help of Chef Bruno and waiter Carlo who is in love with Dante’s daughter Isabella who fancies herself a cabaret singer. However, this is a very dysfunctional family. Dante’s fourth wife Olga is a gold-digger previously in love with Virgil. Isabella resents Olga replacing her mother who was Dante’s first wife. Chef Bruno, of course, is temperamental and volatile. 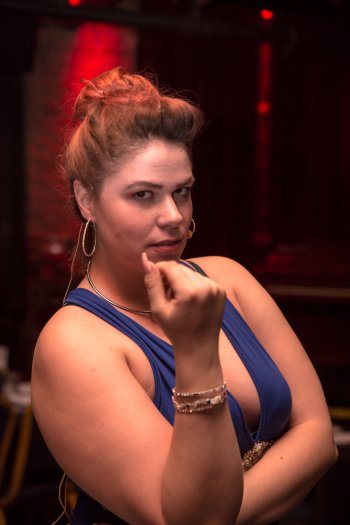 Cassie Nadeau as Olga Donati in a scene from “Truffles: Music! Mushrooms! Murder!!!” (Photo credit: courtesy of the production)

The evening in question is the one in which the Donati family will auction off their famed two-pound truffle which they are hoping will save the restaurant from being taken over by Don Fiola (a member of the audience) During the preshow, the cast circulates and gives out Donati dollars of all different denominations so that the audience can bid during the auction. Isabella entertains from three songs (witty parodies of famous songs by Austin M. Tracy) from her album Songs I Sing at My Father’s Restaurant, Volume Three, produced by Dante to keep her happy.

In the course of the evening, the truffle is stolen and Dante is poisoned. Who could it be? Mysterious passports and tickets are discovered, and Carlo is revealed to be a poor orphan who has no money. All appear to have motives for the crimes. The comedy is punctuated by the clever original songs by Jenni Lark, Hal Galardi and Cassie Nadeau, performed live by The New York Green Birds Trio, and the excellent voices of the entire cast. The plot seems to be almost beside the point as the members of the family and restaurant argue, fight and blackmail each other. Nothing is what it seems. 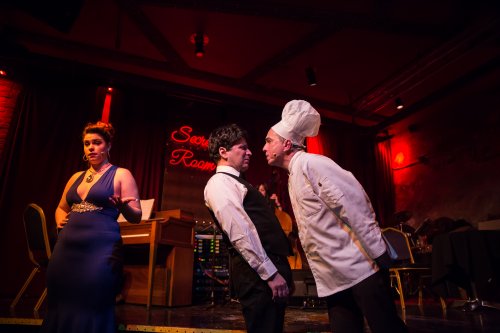 Cassie Nadeau as Olga, Steve Tardio as Virgil and Eddie Varley as Chef Bruno in a scene from “Truffles: Music! Mushrooms! Murder!!!” (Photo credit: courtesy of the production)

Directed by Matthew McVey-Lee, the six member cast throw themselves into their roles, usually over the top but it is that kind of show: glamorous and voluptuous Olga (Cassie Nadeau), embittered and high-strung Isabella (Lindsay Lavin), explosive Chef Bruno (Eddie Varley), devious Virgil (Steve Tardio), sad sack waiter Carlo (Willie Marte) and always excitable Dante (John Guild) who is always about to have a tantrum. The costumes (Emille McVey-Lee, consultant) are exactly what you would expect for such a collection of self-dramatizing characters.

The three-course meal, which begins with a tasting platter from Urbani Truffles, offers three choices of menu with a steak choice for an additional fee, as well as dessert. The Truffle Cocktails (which are not included) continue the murder mystery theme with names like Poisoned Negroni, Clues in the Cosmo, Larceny Old Fashioned, and Poisoned Champagne. Red and white wines are also on the menu. 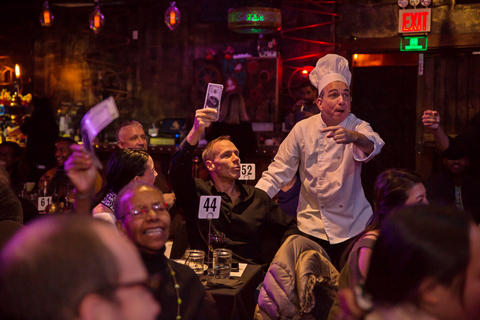 Eddie Varley as Chef Bruno and audience members during the live auction from “Truffles: Music! Mushrooms! Murder!!!” (Photo credit: courtesy of the production)

A pleasant evening in the theater, Truffles: Music! Mushrooms! Murder!!! is not one of the more memorable theatrical mysteries but proves to be diverting entertainment nevertheless. Although the effort can’t be seen, the game cast works hard to entertain whether they are singing, fighting or just causing mayhem. The show lives up to its title which is more than you can say for a great many entertainments these days.

The Secret Room, 707 Eighth Avenue, between 44th and 45th Street, in Manhattan

Running time: two hours including 30 minute preshow at 6 PM without an intermission

Ticket prices vary for show only or with the addition of a three-course dinner. VIP seating also available which includes champagne, priority seating and an exclusive gift from Urbani Truffles when you purchases two admissions.