Mare Winningham and Stephen Bogardus in a scene from “Girl From the North Country” (Photo credit: Joan Marcus)

Although playwright Conor McPherson (The Weir, Shining City, The Seafarer) is Irish, Girl From the North Country, his new play with music and songs by Bob Dylan, is as American as apple pie. This dark and unusual theatrical experience brings to life the Midwest in the Great Depression and approximates a John Steinbeck novel brought to the stage. Its setting of a guesthouse fallen on hard times suggests Sherwood Anderson’s Winesburg, Ohio as well as the family atmosphere of Thomas Wolfe’s Look Homeward, Angel. The workings of the plot has something in common with August Wilson’s Joe Turner’s Come and Gone which also depicts the denizens of a boardinghouse. The use of a narrator in Dr. Walker (played by Robert Joy) to set the time and place resembles the Stage Manager in Thornton Wilder’s Our Town but is a less intrusive device here. An instant classic, Girl for the North County is in the American grain.

Impeccably cast and directed by the author, the large cast of 17 includes a great many well-known faces such as Mare Winningham, Stephen Bogardus, Marc Kudisch, David Pittu, Robert Joy, Luba Mason, Tom Nelis and Todd Almond, as well as some very talented performers who should be better known. The mainly British production team for this show which had its world premiere in London’s Old Vic in July 2017 and moved to the West End, is entirely in tune with the playwright’s concept. While the songs are all from the Bob Dylan catalog of albums dating from 1966 to 2012, this is not what has become known as a jukebox musical. The score includes the iconic “Like a Rolling Stone,” “Forever Young,” “Slow Train” and “Idiot Wind” as well as 16 other less familiar numbers. 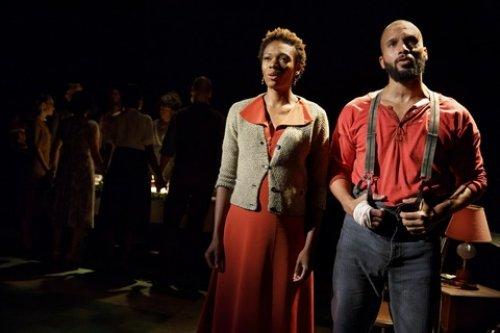 Kimber Sprawl and Sydney James Harcourt in a scene from The Public Theater production of “Girl From the North Country” (Photo credit: Joan Marcus)

All of the songs are presented on mike as though we were at a radio broadcast and the singers do not sing to one another but to the audience. This concert of songs is used as choral background or mood enhancers commenting on the themes of the play: love, loss, death and betrayal. The band is made up of guitar, mandolin, violin, bass, piano and drums, the sound is of classic folk music. Occasionally the lead actors join in with an instrument (Winningham on the piano, Kudisch on drums, etc.) With orchestration, arrangement and musical supervision by British composer Simon Hale, the musical portions are extremely moving and affecting.

The play is set in 1934 Duluth, Minnesota, Dylan’s birthplace but seven years before he was born. It is one of the bleakest winters of the Great Depression and Nick Lane (Bogardus), proprietor of the guesthouse, has until Christmas to pay off his mortgage that has gone unpaid for quite a while, but things are not going well for his family. His wife Elizabeth (Winningham) seems to be overcome with a creeping dementia, and gives him no help. His 20-year-old son Gene (Colton Ryan) hopes to be a writer and contributes nothing to the family coffers. Nineteen-year-old Marianne (Kimber Sprawl), his adopted black daughter who was left at the guesthouse as a baby, is pregnant and there is a mystery surrounding the father. Nick is having a clandestine affair with Mrs. Nielsen (Jeanette Bayardelle), a comforting widow, who has come to town to probate her husband’s life insurance, but Elizabeth knows all about it. 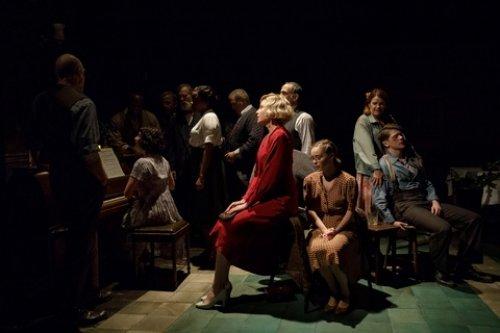 Luba Mason (center) and the company of The Public Theater production of “Girl From the North Country” (Photo credit: Joan Marcus)

Among the motley collection of boarders are Mr. Burke (Kudisch), claiming to be a factory owner, his wife (Mason) and their 30-year-old son Elias (Almond) who is mentally challenged. Things begin to heat up dramatically when Reverend Marlowe (Pittu), a Bible salesman traveling, with Joe Scott (Sydney James Harcourt), a former boxer seeking a comeback, turn up one night in November. Marlowe immediately attempts to blackmail Burke, and Scott is smitten with Marianne, who is destined for the elderly Mr. Perry (Nelis), the local shoe mender and a lonely widower, if her father’s wishes are to come true. To add to the general problems, Gene’s ex-girlfriend Kate (Caitlin Houlahan) informs him that she is moving away to Boston to teach and is engaged to marry a more secure man, which sends him to the local bar to find solace in a bottle. The climax of the story is reached at Thanksgiving when all of the stories come to a head. Girl from the North Country ends with a very bleak Christmas when we learn the fates of all these characters.

The cast including four singers who have no character names works as a true ensemble, each character getting a chance to shine in one scene or another. Winningham is memorable as Elizabeth who is fading into a mental haze but at times is as lucid as ever in her plain-spoken way. Bogardus makes Nick into one of those martyred heroes who carry the weight of the world on their shoulders. As his confidante Mrs. Neilsen, Bayardelle is warm, sensual and comforting. Kimber Sprawl as the pregnant Marianne is staunch and tenacious as she has to make decisions that will decide the direction of her young life. Colton Ryan’s brooding Gene is in the tradition of the rebel without a cause. 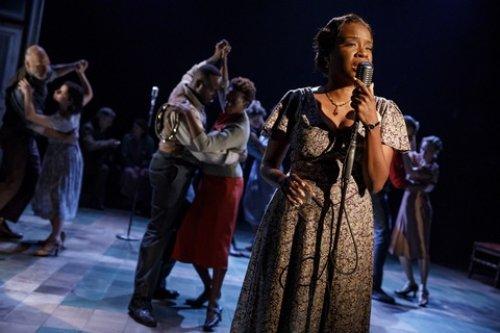 Jeannette Bayardelle and the company of The Public Theater production of “Girl From the North Country” (Photo credit: Joan Marcus)

Kudisch adds another portrait to his growing list of complex men, here the pugnacious and dangerous Frank. Burke. As his wife Laura, Mason is a woman who has seen and suffered a great deal in silence. Almond brings the mentally challenged son to life in a few lines. As the men who turn up in the middle of the night, Pittu is a sinister presence as the fast-talking Bible salesman with a dishonest hobby, while Harcourt is both stalwart and persevering as a man trying to Set in a dark time, Girlchahis life. Joy imbues the doctor/narrator with wisdom and grace in his few, short scenes.

While it is not immediately clear that the play takes place on a sound stage of a radio broadcast, Rae Smith’s minimalist furniture for the several rooms of the guesthouse that are moved by the cast creates all the atmosphere needed as lit by Mark Henderson. The slide projections for the road and the nearby river are used as coup de theatre reveals that are both expressive and breathtaking. Smith’s costumes are redolent of the period but also define each of the characters instantly. Although there is no choreographer listed for the joyful Thanksgiving dance sequences, Lucy Hind is credited as movement director. Simon Baker’s sound design is a model of clarity. 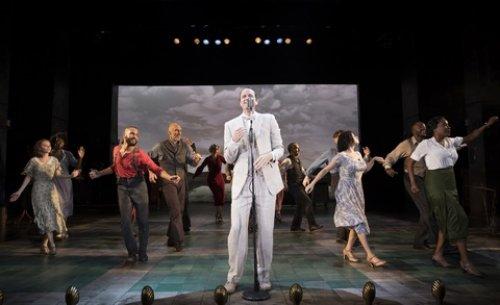 Todd Almond (center) and the company of The Public Theater production of “Girl from the North Country” (Photo credit: Joan Marcus)

Set in a dark time, Girl From the North Country creates a community on stage as do the best plays and musicals. Its tale of lost souls attempting to keep their heads above water is universal in both its message and its approach. Conor McPherson has never written so accessible a play before for Americans, and Bob Dylan’s songs have never sounded so poignant. Girl From the North Country is both unforgettable and not to be missed.

Girl From the North Country (extended through December 23, 2018)