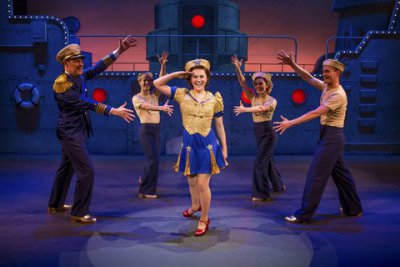 Nostalgia isn’t what it used to be.

Nearly 50 years after its original incarnation, the legendary Dames at Sea is premiering on Broadway.  Unfortunately, this well presented but overblown production is misguided and relatively tiresome.

Sampling such early 1930’s Warner Brothers musicals choreographed by Busby Berkeley including 42nd Street, Footlight Parade, and the Gold Diggers films, the slight plot is a wacky compendium of typical conventions.  Putting on a Broadway show, the understudy to the rescue, boy meets girl, these are all hyperbolically recreated.

The musical first appeared in 1966 at the small historic Off-Off Broadway performance space Café Cino in New York City’s Greenwich Village as Dames at Sea, or Golddiggers Afloat.  It was an affectionate and clever spoof that ran for 148 performances.  Eighteen-year-old Bernadette Peters made a great success in it as Ruby, a young girl from Utah who just got off a train in New York City and becomes a Broadway star.  Of course, Ruby Keeler comes to mind.

Later that year the show transferred Off-Broadway first to The Bouwerie Lane Theatre and then to the Theater de Lys (now The Lucille Lortel Theatre) running a combined total of 575 performances. It had a brief run in London’s West End in 1969 and there have been a few short running regional and Off-Broadway revivals over the years.

Carol Burnett’s movie spoofs on her television variety show, Mel Brooks’ films, the musical stage adaptations of the films 42nd Street, Thoroughly Modern Millie, and the inventive The Drowsy Chaperone are among popular examples of parodies that have come along since. 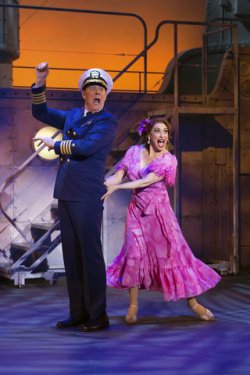 John Bolton and Lesli Margherita in a scene from “Dames at Sea” (Photo credit: Jeremy Daniel)

The initial production received critical praise and won awards from The Drama Desk and Outer Critics Circle.  Such acclaim was based on the uproarious conceit of a bare bones presentation of six actors accompanied by two pianos with percussion duplicating Hollywood movie musicals on a small stage.

This major Broadway production with a full orchestra and Anna Louizos’s lavish sets depicting the backstage of a Broadway theater and a battleship and David C. Woolard’s opulent costumes overwhelms the thin and familiar material.  The lighting design of Ken Billington/Jason Kantrowitz and Scott Lehrer’s sound design are all excellent.  An arch framing device is projections recreating early 1930’s movie credits in black and white that opens and closes the show.

The book and lyrics by George Haimsohn and Robin Miller and music by Jim Wise are a very inspired, skillful, and light-hearted homage to its subjects.  The songs are in many cases recognizable permutations of Irving Berlin, Jerome Kern, and Harry Warren.  “The Beguine,” in particular. is a marvelous sendup of Cole Porter.  The show’s dialogue is a droll mash up of innumerable clichés and reacting to corny plot developments.

As the choreographer of this production, Randy Skinner peppers the show with sensational tap dance numbers.  As the director, Mr. Skinner has staged everything professionally but there is a palpable lack of sparks that keeps the proceedings from going beyond amiable staleness.  Skinner’s vision is at odds with the simplicity of the material.  It is possible to sit through it all without laughing despite the great efforts expended.

The cast is all talented and industrious and succeeds in their two-dimensional roles to varying degrees. 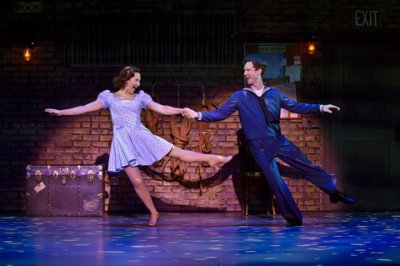 Eloise Kropp as Ruby and Cary Tedder as Dick in a scene from “Dames at Sea” (Photo credit: Jeremy Daniel)

Eloise Kropp is charming and forceful as Ruby.  Mara Davi joyfully makes the most of the wisecracking chorus member Joan.  As the songwriting sailor Dick, Cary Tedder is appealing and personable.  Tap dancer extraordinaire Danny Gardner wonderfully plays the other sailor Lucky, utilizing his dynamic movement and fine singing skills.

John Bolton is hilarious as The Captain.  It’s a zany characterization replete with a stuffy upper class accent and showcasing his limber physicality.  Mr. Bolton also gruffly plays the cranky director of the show being put on.  His quick costume and character changes between the two are a constant cause of merriment.

It is difficult to judge the work of Lesli Margherita as the flamboyant leading lady Mona Kent.  This American performer has had an extensive career that includes winning a Laurence Olivier for her role in the London production Zorro The Musical.  Here she has been directed to be an irritating cross between Charles Busch and Lypsinka.  It’s an ultra campy turn in the realm of drag queen territory.  Ms. Margherita fully embraces this style and is technically commanding but is off putting.

By jettisoning the original light production values that delighted critics and audiences at the time this Dames at Sea sinks under the weight of its contemporary trappings.