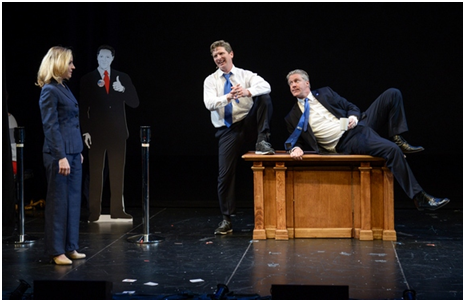 “I’m fucking the fucking president!” is a Spice Girls-style song sung by Monica Lewinsky in Clinton: The Musical. Yes, she’s wearing a beret and a stained blue dress. Those are among several of the many period details in this historical musical satire that might be included in a glossary for younger or forgetful theatergoers.

A grimacing hyper actor in a cheap white wig carries on as Newt Gingrich. Kenneth Starr strips down to a leather harness, mesh and leather underwear. Eleanor Roosevelt appears periodically in a hat and a fur, and says “Oh, shit.” Al Gore is there as a life-sized cardboard cutout. Political adviser Dick Morris appears in a swami-type getup, for an extended number chock full of vulgarity. Bob Dole is represented by a beanbag. Paula Jones, Linda Tripp and Calista Gingrich pop up as well.

Hillary Clinton is blonde, wears a blue pantsuit, rants, and carries a huge heavy binder representing her healthcare plan. Bill Clinton is such a complex figure, that he is played by two actors at the same time. The creators of the show state that they conceived of this device based on the duality of his career and personality. This technical aspect does add an interesting theatrical quality.

“There’s nothing I do better than pounding a Bush!” Bill muses about if he had been able to run for a third term.

The irreverent book by Australian brothers Paul and Michael Hodge is very detailed factually, and revels in its unabashed crass outrageousness. Paul Hodge wrote the music and lyrics that are accomplished and often catchy.

Karl Kenzler and Duke LaFoon make a great team as the two Bill Clintons. Each expertly conveys the cadences, intonations, and essence of the man. That’s all amped up by their superb comic timing and great physicality. That they do not resemble each other, adds to the hilariousness.

Sleek Alet Taylor ably and believably captures the spirit of Hillary Clinton throughout the zaniness. She also is powerfully moving in the rare sincere numbers dealing with Bill’s infidelities and her own plans for power.

Clinton is definitely an extremely accurate lampoon that succeeds theatrically. Depending on one’s sense of humor and sensibility, one might either find it to be raucously entertaining, or tediously stale.