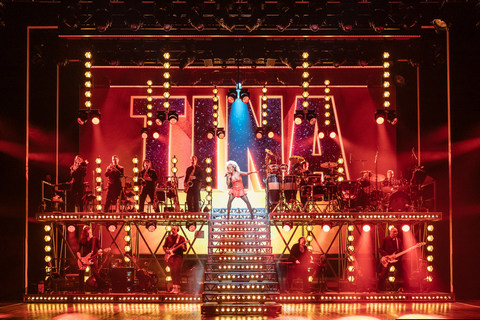 Adrienne Warren and members of the orchestra of “Tina – The Tina Turner Musical” at the Lunt-Fontanne Theatre (Photo credit: Manuel Harlan)

When the subject is as charged up as Tina Turner, the answer is yes—a conditional yes, but….yes, especially when the title character is embodied by the sensational Adrienne Warren who gained accolades for her rendition of Tina in the original London production and is one of the main reasons Tina gained the momentum to make the jump to Broadway.

Tina – The Tina Turner Musical at the Lunt-Fontanne Theatre takes the audience through the highlights and lowpoints of Turner’s fantastically eventful life.  Katori Hall’s high velocity book, co-written with Frank Ketelaar and Kees Prins, begins with Turner in Brazil in 1988 sitting cross-legged, her back to the audience, chanting “nam-myoho-renge-kyo,” a Buddhist mantra in which Turner found comfort.

With a quick shift of scenery, she, now Anna-Mae Bullock, is immediately in the throes of a church service in her birthplace, Nutbush, Tennessee, attended by her family:  her youthful self played by an effervescent Skye Dakota Turner; her strict, violent father Richard (a forceful David Jennings); her frustrated mom Zelma (Dawnn Lewis, making the most of a cartoonish part); Gran Georgeanna (a touching Myra Lucretia Taylor); and sister Alline (as a child played by Gloria Manning and then an energetic Mars Rucker who was suddenly sidelined by an onstage injury at the performance under review, her part taken over by a totally wonderful Leandra Ellis-Gaston). 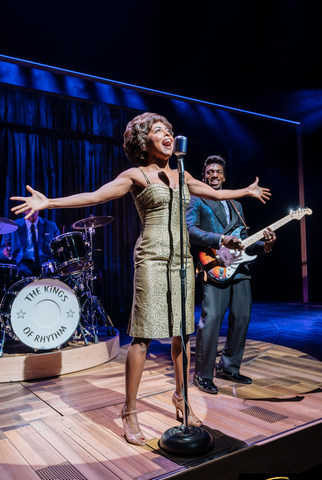 Adrienne Warren as Tina and Daniel J. Watts as Ike in a scene from  “Tina– The Tina Turner Musical” at the Lunt-Fontanne Theatre (Photo credit: Manuel Harlan)

Anna-Mae’s energetic singing brings criticism from her mother who is abused unmercifully by Richard.  In a blink of an eye, the put-upon Zelma leaves the Tennessee homestead for Memphis, dragging only daughter Alline with her.  This deep emotional rift nearly destroys Anna-Mae, taking a disastrous psychological toll on her, the working out of which is the emotional backbone of the musical.

The serendipitous meeting of the 17-year-old Anna-Mae with Ike Turner (Daniel J. Watts, skillfully giving some depth to his villainous role) at a night spot in Memphis begins the epic of their edgy, abusive, but successful partnership which is the plot of Act I of Tina.  Ike uses his charm to persuade Zelma to let the soon-to-be Tina join his band.

The band gathers steam. Tina and the Ikettes become glitzy and glamorous, their costumes (brilliant and period perfect, designed by Mark Thompson) and wigs (by Campbell Young Associates) become flashier and more recognizable.

Tina unfortunately falls for the band’s saxophonist Raymond (an earnest Gerald Caesar) which is complicated by Ike’s leering interest in Tina.

History has made it clear who won in that love triangle. 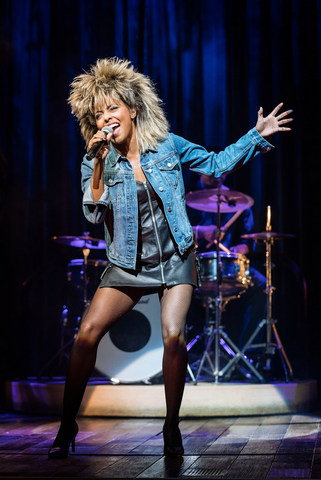 Adrienne Warren in a scene from “Tina – The Tina Turner Musical” at the Lunt-Fontanne Theatre (Photo credit: Manuel Harlan)

Hall’s script sweeps Tina through Ike’s unabated mistreatment on to her leaving him to start her own solo career, despite the fact that Ike passive-aggressively will not permit her to use any of their songs.

We all also know that she triumphed, but not until after moving to England and finding a new artistic identity with the help of Phil Spector (Steven Booth, quite convincing) and dropping her manager/best friend Rhonda (a moving Jessica Rush) and replacing her with a brash young helpful Englishman, Roger Davies (Charlie Franklin, charming and energetic).

Even though she finds new love in Erwin Bach (a quiet, but intense Ross Lekites), she still has to face the psychic injuries handed her by her mother’s rejection and with Ike who tried to tear her to shreds.  The script tiptoes around these issues (“We Don’t Need Another Hero”) before the blasting, super-colorful and optimistic finale ,“(Simply) The Best.”

The very familiar songs—written by Ike and Tina Turner, together or individually—are presented in an oddly un-chronological way, but the audience could care less since these celebrated numbers are loosely pegged to every exciting twist and disturbing turn of Turner’s almost improbable life, chronology be damned! 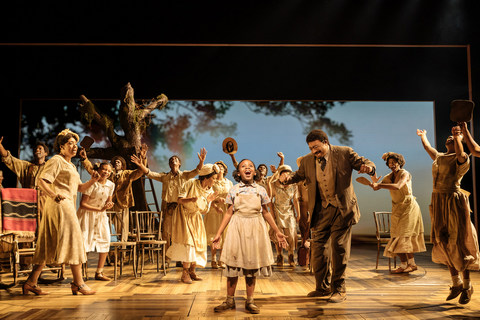 Skye Dakota Turner as Young Anna-Mae and the cast of “Tina – The Tina Turner Musical” at the Lunt-Fontanne Theatre (Photo credit: Manuel Harlan)

The scenery, also designed by Thompson, alternates between realistic sets and Las Vegas glitter.  Bruno Poet’s lavish, yet detailed lighting gives life to the musical as did the musical contributions by Ethan Popp (orchestrations) and Nicholas Skilbeck (arrangements, additional music, and conducting).

Phyllida Lloyd directs Tina with zest but can’t quite overcome the script which has too many dead spots.

Tina – The Tina Turner Musical is, indeed, a Jukebox Musical, but one with great performances and a powerhouse Adrienne Warren who takes the audience on an exciting journey into the life of a musical legend who is still very much alive and active in producing this biographical tribute to her tribulations and successes.

[Note: the role of Tina Turner is played by Nkeki Obi-Melekwe at the Wednesday and Saturday matinees.]