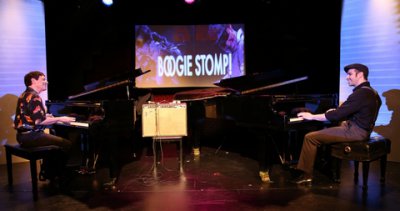 First rising to fame in the early 1920’s, Boogie Woogie led the way for pop music in America in the 20th Century. A collection of classic hits that defined the genre as it is today, Boogie Stomp! is two hours of non-stop fun. From Muddy Waters to Chuck Berry, The Beach Boys, Buddy Holly and Benny Goodman, there is an eclectic enough offering in this show to get every audience member dancing in their seat.

Performed by two bonafide Boogie Woogie experts, Baldori and Migliazza are positioned on stage next to each other in front of their dueling grand pianos. With a lifetime of experience in the business, Baldori has played with Chuck Berry for the past 40 years in over 100 performances. This is evident in his stylings, technique, and from the hilarious and entertaining stories that are told in between songs. As his counterpart, Migliazza is a skilled and formidable musical opponent. Together the two take turns singing, playing the piano or keyboard, or cracking jokes to the audience to vary the pace.

Though the musicians are both technical and impressive throughout the entire evening, the most exciting and powerful moment of the evening is when Baldori breaks out his harmonica for a passionate and bluesy solo, while Migliazza leads the way on piano. In general, the evening is filled with a variety of songs that transcend genres and succeed in keeping things interesting. The pacing of the show is also expertly cultivated, and slower jazz tunes are bookended by upbeat dance tunes and crowd pleasing American Classics. 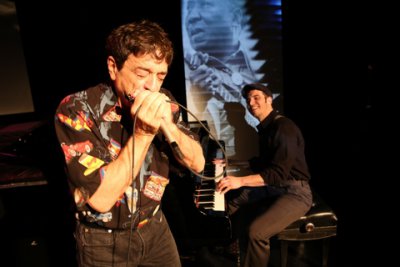 Bob Baldori on harmonica and Arthur Migliazza at the piano in a scene from “Boogie Stomp!” (Photo credit: Rebecca Scheckman)

Presented in Midtown, The Elektra Theater is an intimate space that has a classic vibe to it: that of the old late-night Jazz venues that didn’t rely on huge sound systems but rather the acoustic design of the space. Catering to nostalgia for a time when pop music was still young and much more influential, Boogie Stomp! is an enjoyable ride that succeeds in demonstrating the timelessness of the classic songs that paved the way for the contemporary music of today.