[Note: This review is of the previous engagement in 2015.] 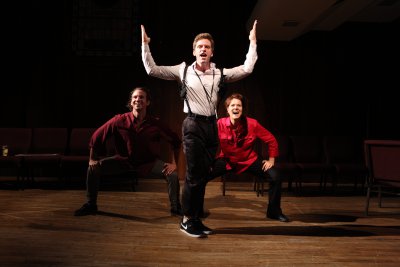 Brandon Espinoza, Brennan Caldwell and Claire Neumann in a scene from “Who’s Your Baghdaddy? Or How I Started the Iraq War” (Photo credit: Jeremy Daniels)

When the audience arrives there is a card table with donuts, coffee and wine in the center.  A friendly young fellow invites audience members to have refreshments.

After everyone is assembled he notes a few who have attended before and calls on one.  “I’m Berry and I started the Iraq War…I’m a CIA analyst.”  Several other audience members are revealed to be actors who also confess their culpabilities.  After this promising comedic prologue of a simulated support group, Baghdaddy becomes a musical.

The score with music by Marshall Pailet and lyrics by A.D. Penedo is a professionally sounding variety of show tunes, ballads and Hip-hop that don’t have much impact.  Rona Siddiqui’s musical direction is adept.

Mr. Pailet and Mr. Penedo’s book is based on an unproduced screenplay by J.T. Allen and a it’s wearying and relatively uninvolving barrage that lampoons the errors in U.S. intelligence leading to the Iraq War.  CIA analysts, foreign spies and informants around the world are satirically skewered. 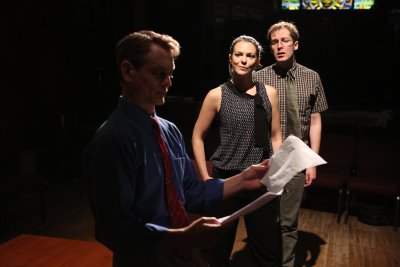 Jason Collins, Larisa Oleynik and Olli Haaskivi in a scene from “Who’s Your Baghdaddy? Or How I Started the Iraq War” (Photo credit: Jeremy Daniels)

The very talented cast, several of whom have major credits, includes Brennan Caldwell, Jason Collins, Bob D’Haene, Brandon Espinoza, Olli Haaskivi, Nehal Joshi, Claire Neumann and Larisa Oleynik.  However, due to the material and the direction their performances chiefly consist of mugging, wildly gesticulating and putting on funny voices.

Mr. Pailet also directed and his staging is lively and inventively makes use of the minimal props and lack of scenery.  The choreography by Misha Shields is of the Spring Awakening style with a lot of jumping up and down and moving chairs and tables around.

The low-tech production elements cleverly add compelling visual qualities.  Caite Hevner Kemp’s set design artfully utilizes the space.  Summer Lee Jack’s costumes are an accomplished blend of the whimsical and realistic.  Lighting designer Jen Schriever creates a number of inspired effects including one of eerie darkness and the cast holding flashlights and turning them on and off. 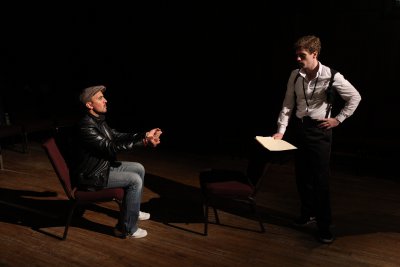 Nehal Joshi and Brennan Caldwell in a scene from “Who’s Your Baghdaddy? Or How I Started the Iraq War” (Photo credit: Jeremy Daniels)

The shorter second act takes place in the aftermath of 9/11.   Grimness pervades despite the jocularity and recordings of President George W. Bush and Secretary of State Colin Powell are heard decrying Saddam Hussein’s purported weapons of mass destruction.  As the show reaches its conclusion, there is more dramatic tension colliding with the comedy and it partially achieves its intended provocative aspirations.

Stanley Kubrick’s Dr. Strangelove or: How I Learned to Stop Worrying and Love the Bomb appears to be a titular and stylistic inspiration.   Like that classic film, one’s enjoyment of Baghdaddy depends on one’s sense of humor and sensibilities.