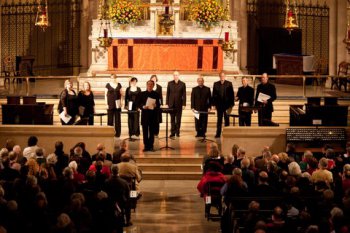 The Tallis Scholars with founder and music director Peter Phillips at the Church of St. Mary the Virgin

Musical and intellectual elegance are both the mission and the achievement of The Tallis Scholars. Their avidly appreciative audiences know that they are receiving, in these musicians’ performances, unmediated access to the subtlest intentions of choral composers from the Renaissance to the present.  The Tallis Scholars’ recent performance at St. Mary the Virgin, Christmas Across Centuries, was no exception. Directed as always by musician, scholar-writer and Tallis Scholars’ founder Peter Phillips, these singers were wonderful.

The program itself was a masterpiece of artistic and theological integrity. Pieces by three composers – contemporary Estonian Arvo Part (b.1935), and Renaissance Englishmen John Sheppard (c.1515-1558) and Thomas Tallis (c.1505-1585) – carried the full chronological account of the earthly life of the Word made Flesh, from conception in the Virgin’s womb to emergence as the salvation-bearing Lamb of God. The order of the program essentially replicated the Nicene Creed, each piece providing an illumination of a particular narrative or liturgical moment.

Though separated by more than four centuries, Part’s music on the one hand and Sheppard and Tallis’s on the other share the same purpose: all the distinct melodic lines and harmonies – individuals’ or sections’ – explore both the layers of meaning within the texts being set to music and the complexities of human response to those meanings.

Sheppard is a particular master of the use of polyphony to convey both divine meaning and earthly response. In Sacris solemniis, Sheppard’s splendid setting of Thomas Aquinas’ Corpus Christi hymn of praise and the first Sheppard piece on this program, the composer alternates sturdy hymn expositions and rich expressions of awe, with a recurring high soprano line that evokes the angels’ praises. The brief “Amen,” when all voices sing in solid unison, is then thoroughly grounded in an unexpectedly earthy gratitude. 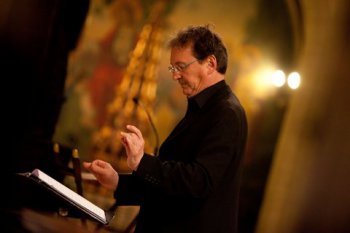 The Tallis Scholars’ founder and music director Peter Phillips at the Church of St. Mary the Virgin

Similarly, Sheppard’s Gaude, gaude, gaude lifts both chant and harmonies into an empyrean of delight. The closing “O benigna” movement was eloquent as both explanation of the miracle of the sacred mother’s virginity and praise for it.

For most members of the audience, the most familiar pieces of the program were the “Gloria,” “Sanctus,” “Benedictus” and “Agnus dei” from Tallis’ gorgeous and daring Missa Puer natus est nobis. Here, The Tallis Scholars were, of course, in their element, walking the geography of their origins.

The Tallis Scholars, when singing English Renaissance music, make the motion of every melodic line, blend of chords, all the unexpected progressions, returns and rhythm shifts as visible as the most graceful Tudor embroidery threads, dense closeness rendered spacious. This pellucidity is The Tallis Scholars’ hallmark: since their founding in 1973, they have systematically married intellectual rigor to aesthetic clarity.

Even more than most ensembles, The Tallis singers are able, when singing the Part’s music to illuminate especially effectively some of Part’s musical ancestry in early modern polyphony. 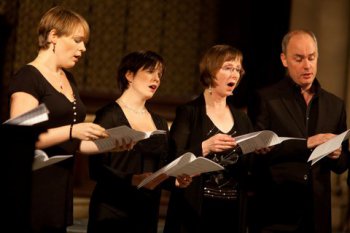 Members of The Tallis Scholars at the Church of St. Mary the Virgin

In the Seven Antiphons (1988, revised 1991), the Tallis singers made of the texts’ contrasts of anticipation and fear, the very essence of Advent, a ringing revelation. In the Magnificat, Part’s writing ensures that Mary’s resistance to injustices is not forgotten even in the humble sweetness of her submission to Gabriel’s message. The difficult passage in which Mary declares that the hungry have eaten good things and the rich sent away “empty” was particularly compellingly sung.

The most recent Part work on the program was the 1996 I am the true vine. In this piece, the central, deeply textured development of ideas of “abiding” moves the text from Jesus’ mystical metaphor to his command to universal love. I am the true vine is a marvelous piece which The Tallis Scholars sang marvelously well: they captured Part’s ability to use music as a means to consider the characteristics and contours of Christian mysticism.

As is happily predictable with Miller Theater concerts, the program booklet was handsome and informative. However, unaccountably, atypically – and quite irresponsibly – the names of the Tallis singers themselves were not listed. Surely all of them are first-rate artists, individually as well as in this ensemble, who should be acknowledged; in addition, those who, in this concert, had solos or featured lines, should be able to be credited for their particular contributions.

In spite of this presumably accidental mistake, the evening as a whole did turn out to be, as its Christmas Across Centuries title suggested, a splendid gift of musical beauty for the Advent season.

Church of St. Mary the Virgin