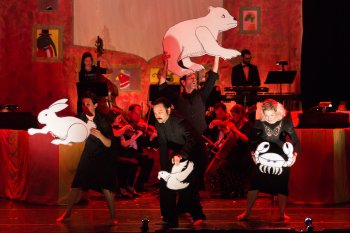 Puppeteers Kristen Kammermeyer, Justin Perkins, Brendan McMahon and Rachael Shane in a scene from “The Carnival of the Animals” at Miller Theatre (Photo credit: Karli Cadel)

At the Miller Theatre at Columbia University, holidays and the New Year were celebrated with a splendidly witty, sometimes poignant and sometimes thrilling, and always inventive production of Camille Saint-Saens’ The Carnival of the Animals. It was magical.

A small orchestra of ten, directed by Laura Barger, four puppeteer-dancers and a marvelous narrator, “His Highoness” Lelund Durond Thompson, presenting the luscious 1949 lyrics of Ogden Nash about Saint-Saens’ “grand zoological fantasy,” as the work was first called, created a performance that enchanted hundreds of children and their attendant grown-ups.

The inspired director and designer of the production, Lake Simons, transposed the ideas and conventions of Victorian toy theaters into a full stage performance; the set itself – a rich red curtain and minimally stylized central placement of the orchestra in front of a painted drawing room backdrop – created a sense of celebratory fun. After four brief tinklingly sparkling performances of Byrd, Tchaikovsky, Yarrow and Davis pieces on miniature harpsichord and small xylophone, the Saint-Saens began as Thompson introduced the work and immediately established an intimate connectedness with the audience, quickly transforming any potential for squirminess into happily rapt attention. 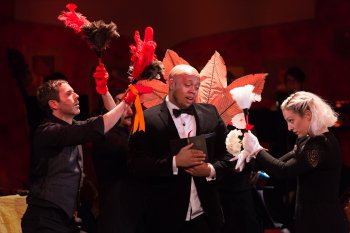 Brendan McMahon, narrator Lelund Durond Thompson and Rachael Shane in a scene from “The Carnival of the Animals” at Miller Theatre (Photo credit: Karli Cadel)

The gifted puppeteer-dancers – Kristen Kammermeyer, Brendan McMahon, Justin Perkins, Rachael Shane – were barefoot and dressed in black; they moved with graceful economy of movement and made themselves into a fantastic combination of invisibility and magisterial artistry. They manipulated more than two dozen every-day-object puppets in gorgeous worlds of sky for birds, water for fish, field and forest for all sorts of creatures large and small. All these animals – made of sticks, brooms, mops, feather-dusters, cardboard-cut-outs, fabric scraps, familiar bits of this-and-that, and unexpected parts of who-knows-what – were right there in front of us. They leapt and loped, swooped and soared; they teased and pleased, tested, tormented and befriended each other and the narrator; they made each person in the audience – old and young, big and little – feel individually included in the menagerie’s movements.

Saint-Saens’ music is full of allusions and references that grown-ups could revel in; Nash’s mellifluously rolling lyrics contain delicious double-ententes and luscious innuendos. Thompson’s physical vitality and the puppeteer-dancers’ skills created 30-second to two-minute skits that were hilariously funny.  For entirely different reasons, adults and children often laughed out loud simultaneously for both shared and separate reasons. (What a feat!)

There were moments of delicate and inviting beauty. The aquarium was full of movement; even as Saint-Saens’ music played, the feel of the ocean’s silent swimming was palpable. When birds, little and large, flew from the stage out over and above the audience, everyone could fly. 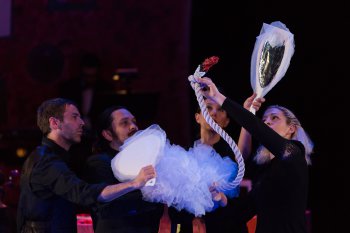 Puppeteers with “The Swan” in a scene from “The Carnival of the Animals” at Miller Theatre (Photo credit: Karli Cadel)

“The Swan” was particularly lovely. Even if Nash’s lyrics had not mentioned Anna Pavlova, reminding grownups of her famous “Dying Swan,” and even if the children had never seen a dance about last breaths before, the puppeteer-dancers use of their simple white feather-and-fluff puppet-props to quote Mikhail Fokine’s choreography for Pavlova was gently, delicately evocative.

The rousing all-animals finale was joyful. It made everyone clap enthusiastically and smile and start talking immediately. It was a celebration of imagination, the very stuff and substance of holidays and new years, adults’ optimism renewed and children’s dreams enlivened.

Camille Saint-Saens: The Carnival of the Animals, featuring the poetry of Ogden Nash (December 19, 2015)