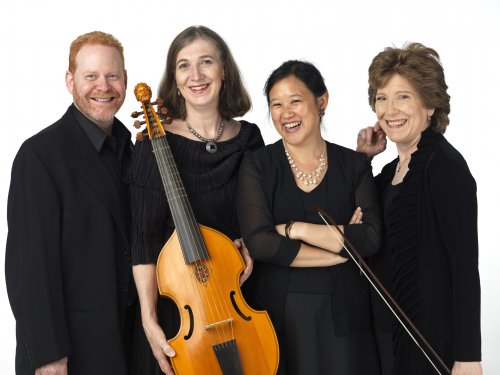 On November 8, 2013 in the welcoming Benzaquen Hall performing space of the DeMenna Center in Manhattan, Random Access Music, a New York City based consortium of contemporary composers, presented an evening of new music created specifically for the highly acclaimed viol consort, Parthenia.

The program opened with a brief welcome from Allen Schulz, president and founding member of Random Access Music. He noted that plans for collaboration between Parthenia and RAM began almost two years ago; this November 8 concert of RAM’s 2013-2014 season was the first of what many hope will be continued future collaborations.

The first work of the evening was Jonathon Pieslak’s Bhakti (1), Unburdening, described by the composer as a “Hindu devotional” piece. The piece opened with a few musical plucked notes which continued after Pieslak’s recording of his chanted “Om” began. Throughout most of the piece, the “Om” chant continued, functioning as a basso continuo, undergirding the viols’ music-making with a deeply elemental sense of breath and breathing. The music of the four viols was a series of dialogs and conversations of two, three or four voices; these exchanges were reflective, alternately diverging from and then returning to central rhythms and tunes. The recorded chant moved at the end from “Om” to the “Om Asato Maa Sad-Gamaya” text, the Hindu prayer chant always used to conclude a longer sequence of devotional prayers. The viols played a few bars more after the chanting ended, and the silence before the audience began applauding was very like the period of reorientation necessary when a person emerges from meditation “back” into daily routines.

In spite of the modern technology of the recorded chant, the feel of the piece was ancient, organic and entirely human: it was a compelling, credible and creative exploration of some of the complex movements of mind during prayer and meditation.

The second piece, Tierra Magnifica, was by Gilbert Galindo, a work the composer described in the program notes as, simply, “my homage to the west Texas land and skies.” The landscapes of the piece, however, were internal and cerebral. The music gave a rewarding account of exploration, not of time or geography, but of sound and texture, of dissonances and harmonies.

The last piece of the first half of the concert was Schulz’s Aspects of a Singularity. This work set itself a particular practical and intellectual task: it was written to understand how the viols – instruments associated with “early modern” music – could be used to put late medieval and Renaissance music patterns and motifs into twenty-first century postures, queries and experiments. The result was a happy one that transcended mere musical exercise to enter into the realm of self-contained loveliness.

The opening piece of the second half of the program was David Fetherolf’s Atrytone, a five movement duet for treble and bass viols. As Fetherolf explained in the program notes, he composed the piece not just for these particular instruments but for these performers to take on as their own. The order of the movements and directions for dynamics and ornamentation were all left to the performers.  Altogether, the diverse sounds of the work ranged from sober and reflective, to plaintive and meditative, to jazzy, sassy and impudent. Intellect and wit informed this wide-ranging piece.

The last piece of the evening, From a Fairy Tale, was by Frances White, a guest composer in RAM’s overall project of working with Parthenia. White’s piece was itself the result of close collaboration: she and her husband, writer and scholar James Pritchett, have recently been exploring the world of Andrew Lang’s fairy-tales. From a Fairy Tale illuminates a barely existent story contained within the long, complex tale, “The Princess and the Chest” from Lang’s 1897 The Pink Fairy Book. Pritchett wrote a deceptively simple, very short libretto, From a Fairy Tale, for this new piece. Actress, writer and director Valeria Vasilevski, who has collaborated with Pritchett and White on several projects, read Pritchett’s text and then Parthenia performed White’s music.

Pritchett’s text is a narrative presentation of one fairy tales’ most fundamental tropes: within the isolation of a garden, love unexpectedly happens. There is a girl in the beautiful garden that is “hers and hers alone” but there are no people. The “then-one-day” element is the arrival of a bird whose songs the girl gradually notices; she begins to tell the bird her secrets. Their hearts are opened, and they have fallen in love. Vasilevski’s delicate, elegant reading conveyed both the story’s sweet spareness and its archetypical mysteriousness.

After Vasilevski read the text, the Parthenia musicians began to play. White’s music was evocative and rich, ranging with unhurried grace from the ethereal to the lush. Individual instruments carried identifiable elements of the tale; White has assumed for herself a secure place in the company of composers who have successfully brought bird-song into the concert salon. The viols were also able to sound sweepingly sensuous, nearly orchestral. White’s From a Fairy Tale was, in short, quite beautiful.

Each of the evening’s five pieces was wonderful. Taken all together, they provided a wide variety of ways to consider the concert’s very thoughtful title, “Prisms: Ancient Courses in a New Light.”

Parthenia is a remarkable group. The commitment that these four superb musicians have made to this particular set of early modern instruments – viols: aged cousins to violins, cellos and their “siblings” on the one hand and to guitars on the other – is intellectually and artistically exciting, innovative and authoritative. The viols have a complex, resonant sound to them, alternately light and earthy, and are most closely associated with the extensive late medieval to early eighteenth century repertoire for viols that has experienced a significant revival over the last twenty-five years; as a result, any music of any era played on the viol carries with it the echoes, references and allusions of various eras and styles of old music. Individually and together, the Parthenia musicians treat their viols as both products of certain historical periods requiring certain historically based treatment and as entirely contemporary instruments, demanding bold imagination and completely fresh artistic use. Parthenia’s tremendous success comes from their clear, deep affection for their instruments and from their intuitive attentiveness to each other’s profound and subtle musicianship.

Each composition on the program could stand on its own as a twenty-first century work; but all of them were the richer for the extent to which the instruments themselves, by their very sound, made historical references. In every piece, the ways in which historical memory shaped contemporary experiment constituted core elements of the compositional purpose; the Parthenia musicians were marvelous collaborators in this endeavor.

Two works, Pieslak’s Bhakti (1), Unburdening and White’s From a Fairy Tale, also expanded the program’s “conversation” about memory in the musical relationship between past and present by adding language and words. Pieslak’s recorded chant, especially the extended, almost pre-verbal “om” elicited within the listener the possibility of attaching verbal meaning to the instrumental music. White’s piece – music placed completely after the spoken word – became narrative: it was not possible to hear the music without “hearing” the story.

“Prisms: Ancient Courses in a New Light” provided listeners with a rich intellectual and aesthetic engagement at many levels. In the loving, skilled hands of the Parthenia artists, the viols told a story of old instruments making all sorts of brand new music. Musicians and composers collaborated to create pieces both on and about the viols. And the audience had the privilege of considering how meaning is made in works in which remembered music and current sound meet in an intimate live performance.

If this program’s works were an indication of what future RAM-Parthenia collaborations might be like, then musicians and audiences alike should eagerly look forward to continuing projects.