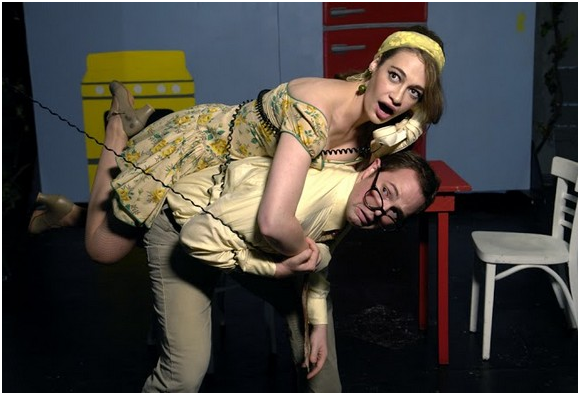 in a scene from Out the Window

Under the title The Power of Love, Theater for the New City and The After Dinner Opera Company are co-presenting a pair of one-act operas, Out the Window, with words and music by Seymour Barab, and Rappaccini’s Daughter, from the short story by Nathaniel Hawthorne, with a libretto by Linsey Abrams and music by Michael Cohen.

Composer Seymour Barab passed away in June at the venerable age of 93. For modern music fans, his name was familiar from his long tenure as cellist of the Composers String Quartet, famous as a champion of such High Modernist masters as Elliott Carter and Milton Babbitt. But his true passion was for composition, at which he was prolific and eventually successful. He was especially drawn to music theater, with more than two dozen operas to his name.

Only a few of those are on a grand scale, however, and the 1985 Out the Window is one of his many chamber pieces. It’s a two hander, with a plot based on Georges Feydeau’s early farce Par La Fenêtre. In it, the Husband (James Parks) comes home after work exactly on time–he explains that he’s always punctual because otherwise his wife gets insanely jealous. But this time he is perplexed, as it is she who is late. There’s a knock at the door, and a strange woman (Lauren Hoffmeier) introduces herself as his neighbor from across the way. She then begins acting inexplicably familiar. It turns out she too has an insanely jealous spouse, is assuming he is spying on her through the open window, and intends to provoke him by a feigned frolic.

Barab’s musical language is conservative. Though written in 1985, there’s nothing here that an audience of 1940 would have found surprising, and while it avoids the fustiness of self-conscious conservatives such as Howard Hanson and Randall Thompson, this piece at least lacks their knack for giving out the occasional big tune.

Where Barab excels is pace, an underappreciated skill. Out the Window is forty-five minutes of continuous music for two voices, and yet it consistently avoided doing any one thing for too long (producing monotony) or changing ideas too quickly (producing confusion). And the good humor was consistent also, director Lissa Moira finding amusing ways to animate what might have been merely dull expository stretches.

Of course, Moira and the cast deserve a lot of the credit. Farce is notoriously difficult to pull off, but each of the scenes and sub-scenes went off like clockwork. Ms. Hoffmeier was particularly fun, her wonderfully expressive face and voice deserving a place on larger stages. Even the set design by Mark Marcante made a witty contribution: it wasn’t just that a few bright colors were chosen, but that the hue of every object on the set conformed exactly. 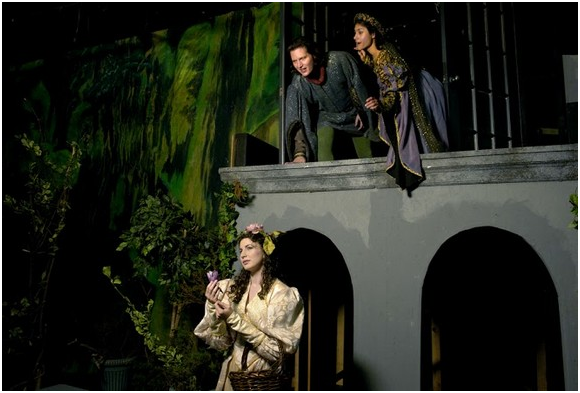 Dunn (above) in a scene from Rappaccini’s Daughter

After intermission came Rappaccini’s Daughter. Cohen is best known for his musical adaptation of The Diary of Anne Frank, first as the Off-Broadway musical Yours, Anne, and later refashioned as the song cycle I Am Anne Frank.

In Rappaccini’s Daughter, we follow Giovanni (Douglas McDonnell). He has come to Padua to study, and is given lodgings overlooking the garden of the somewhat sinister Dr. Rappaccini (William Broderick) by Rappaccini’s servant Lizbetta (Darcy Dunn). Giovanni observes that it’s no ordinary garden:

no common blooms in sight, by the Madonna.

Each one a plant of poison, full of malice.

The garden is tended by the doctor’s beautiful daughter Beatrice (Samantha Britt), and as Giovanni gets to know her, he begins to sense that something is very wrong. Professor Bagiolini (Martin Fisher), hints that Beatrice, who seems immune to the effects of the deadly vegetation, may somehow have become as poisonous as they, and that her father has created this situation deliberately.

Cohen’s music stays true to the story’s origin as horror-fantasy, akin to the work of Hawthorne’s contemporaries Mary Shelley and Edgar Allan Poe. But the libretto approaches the scenario as a romance, even changing the ending in a way which evokes Romeo and Juliet. As a result, though the actors did a beautiful job with their elegantly chromatic lines, the extended scenes between Beatrice and Giovanni are probably too emotionally overwrought to be playable, particularly a problem not in an intimate venue. It did not help that the tenor part often sits stressfully high, which lead to occasional unpleasant blasting.

On top of this, it was almost entirely slow music, and over 90 minutes of it, something which might give even a Wagnerian pause. This is billed as a new piece, so perhaps it’s not too late to suggest that the authors consider some discreet compression, as the opera might benefit from judicious cuts. It takes perhaps half an hour to read the original story, and its brevity is one reason for its effectiveness; but this was more than three times that length, though the original Hawthorne plot has been only very slightly expanded.

As with the Barab offering, director Moira and her cast did well with the sometimes difficult material, and again the detailed attention given to the physical production, including the costumes by Jennifer Anderson, was time well invested. One of the collaborators’ riskier additions to the story is to have the poisonous plants in Rappaccini’s garden represented by dancers, but this actually worked out very well, thanks to the apt choreography of Robert Gonzales, Jr.

Musical director Jonathan Fox Powers was an able pianist, though he was hampered by his

instrument, which had one or two badly regulated (a.k.a. “funny-sounding”) bass notes.

Theater for the New City, 155 First Avenue, between 9th and 10th Streets, in Manhattan


Running time: one hour and 50 minutes, including one intermission