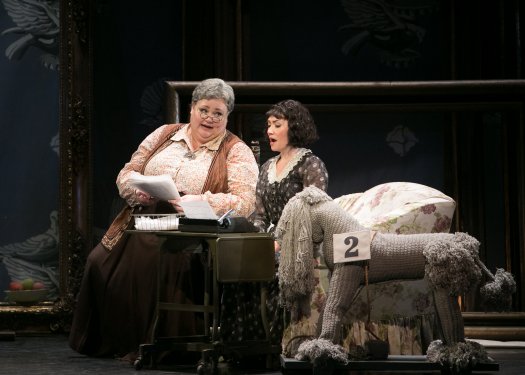 Stephanie Blythe and Heidi Stober in a scene from MasterVoices’ production of “27” (Photo credit: Erin Baiano)

MasterVoices’ (formerly The Collegiate Chorale) New York debut of Ricky Ian Gordon’s opera 27 weaves together important cultural threads — events and gatherings that changed the world of art and literature. 27 rue de Fleurus — the address of the Gertrude Stein home and her Salon (from whence the opera name comes) — was “the” cultural nexus of Paris from 1903 to shortly after World War II.

At the Stein home, history was made — the “first museum of modern art” was created; Paris’ haute culture was popularized; Gertrude Stein became known as an impresaria legend; and Stein’s relationship with her life-partner, Alice B. Toklas, became immortalized. 27 is a dulcet and euphonious musical tapestry that portrays Stein and Toklas’ important contributions to the world of art.

The Stein home became the axis-mundi for what was artistically in vogue and for those who were intellectually curious. Gordon’s entertaining score is melodious and affable; an opera with a prologue and five short acts in one ongoing rhythmic flow.

27 opens with Alice B. Toklas remembering Gertrude’s passing as she knits. Her memories present her and Gertrude’s life together chronologically. Rising star Heidi Stober, a lyric soprano, is compelling and sensitive in her portrayal of Alice. A celebrated poet once commented that Alice’s speaking voice was “like a viola at dusk.” Stober’s performance astutely captures that image. 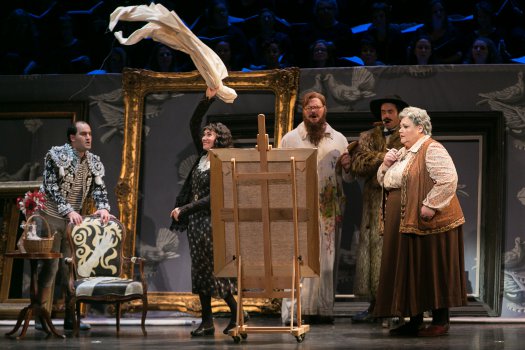 Allen Moyer’s inspired scenic designs deliberately conjure up visual allusions apropos to Alice’s reflections. Knitting, stitches together Alice’s memoir; knitting against a wallpapered background of turtle doves, symbolizes the love and devotion both Alice and Gertrude have for each other. Moyer’s empty picture frames leaning against the wallpaper beckon and entice Alice to fill them with her memories of Gertrude and the Stein Salon.

Gordon created the role of Gertrude Stein with mezzo-soprano Stephanie Blythe in mind. Blythe’s monumental presence, thanks to a towering, charismatic, forceful voice, is meant to arrest and command attention. Blythe captures Stein’s complicated personality – her genius, her stalwartness, her humor and her occasional, brutal judgments about the artistic quality of her bon mots.

Gordon denotes the subtle and quirky nuances between two extraordinary women (each exceptional in their own right). Their duets are tender and intimate; their devotion and love to one another is a wonderful lyrical collage. Gordon vividly characterizes their unconditional support of each other, and their commitment to revealing great talent to Paris and the world; their raison d’être is giving birth to genius. Ringing bells punctuate their relationship, their love and the genius Gertrude Stein (with Alice’s help) cultivated.

Several of Gordon’s rhythmic essays make accessible the daring do of artists and writers who were marked with the Steinesque genius stamp of approval at her Saturday night Salons — Matisse, Picasso, Hemingway and Fitzgerald, to name but a few. Tenor Theo Lebow, baritone Tobias Greenhalgh and bass-baritone Daniel Brevik take on the roles of the “geniuses,” as well as the wives or girlfriends of geniuses and soldiers. They are tasked with fast-paced costume and character changes. Lebow is a stand-out as Picasso and brings weight and credibility to the role. 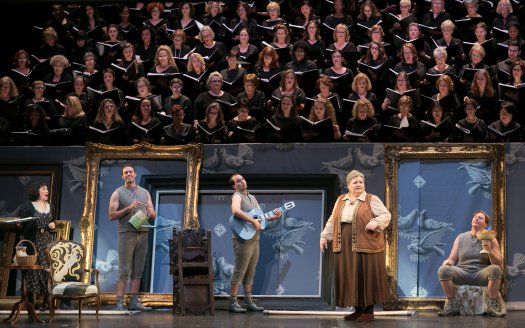 Repetition of particular words is key to the libretto: wife, safe and genius. Royce Vavrek’s lyrics walk a fine line between overuse and mainsplaining. Biographers have been quick to point out that Alice was insistent on being recognized as Gertrude’s “wife,” and not simply her secretary, seneschal or companion. But, Vavrek punctuates his opera script with “wife” dozens of times, where the word’s extensive use becomes a caricature of Alice’s desire for recognition. The same is true for “genius.” Extensive use of each word becomes annoying. Even though Stein was known for repetition – “a rose is a rose is a rose” – hearing each of these words over and over border on being irritating.

Vavrek drew from the “letters” that Stein and Alice wrote to each other. Several of his choices for terms of affection – words that were meant to be private – on stage can be perceived as exploitive. Words that have double meanings (in particular today) can rob the story of its agency and give pause. It is not necessarily an asset to have intimate words from love letters taken out of context.

James Schuette’s costume designs look remarkable and are reminiscent of the ones in the celebrated photographs of the couple. His exaggerated garbs help to distinguish the artists, especially Picasso with his memorable black-and-white-striped jersey. Tom Watson’s wig designs also are adept. James F. Ingalls’ lighting design is skillful throughout.

27 was commissioned by the Opera Theatre of Saint Louis, and received its world premiere there in June 2014. James Robinson deftly directed both the St. Louis production and the New York premiere. Ted Sperling conducted the Orchestra of St. Luke’s with passion and vigor. Gordon added a 150 person chorus for MasterVoices to both strengthen and heighten key parts of his opera. The chorus addition makes the opera seem more of a heroic poem.

Towards the end of her life, Gertrude Stein declared: “I always wanted to be historical.” Stein’s obsession with collecting “geniuses,” and maintaining her standing as one herself, has won her saloniste legacy, in addition to her being renowned as a patron of the arts extraordinaire. Her significant other, Alice B. Toklas, sits by her side, not only as a “wife,” but as an equal partner in securing this legacy.