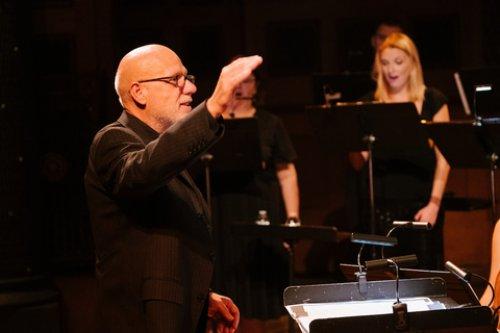 Directed by Donald Nally, The Crossing, a professional chamber choir committed to contemporary music designed to place choral music within both larger cultural contexts and social, political issues, recently presented a compelling evening of reflections on war in general and the dangerous divisions of the present Trump Era in particular. The site-specific Of Arms and the Man consisted of eleven choral works (by nine composers)  about our twenty-first century American human condition; the gilded imperial militarism of the Park Avenue Armory provided historical commentary and trenchant moral judgment on wars, their purposes and their consequences.

Nally’s extensive program notes provided insights on the program, whose title comes from the opening line of Virgil’s Aeneid, “Arma virumque cano” … “I sing of arms and the man.” Nally juxtaposes the Roman epic with Lawrence Ferlinghetti’s 1976 “call to poets” and notes the presence of rage as a human impulse that links Aeneas’ war stories with the contemporary United States. Various choral pieces in the program by contemporary composers as diverse as David Lang, Gabriel Jackson, Suzanne Giraud and Sebastian Currier addressed themes such as grief, awe, reverence, hope and anger. The pieces were typically a cappella, but three marvelous cellists – Alexander Hersh, Arlen Hlusko and Thomas Mesa – provided linking music between works.

Musicians and audience traveled between two spaces in the Armory: the first “act” was in the Board of Officers Room and the second, in the Veterans Room. Portraits of elegantly uniformed soldiers and generals offered silent witness to the ugly legacies of nineteenth century American wealth’s complacencies. 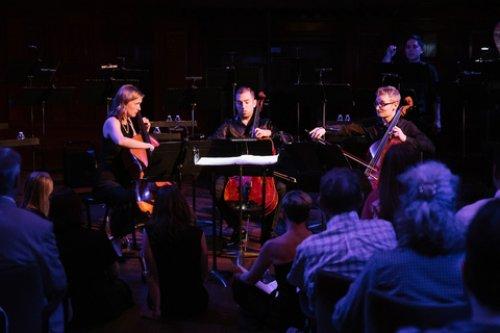 Cellists Arlen Hlusko, Alexander Hersch and Thomas Mesa as they appeared at The Crossing’s “Of Arms and the Man” concert at the Park Avenue Armory (September 20, 2018) (Photo credit: Da Ping Lao)

Most of the works on the program were New York premieres. Of these, Jackson’s 2014 Our flags are wafting in hope and grief was lush and poignant; Giraud’s atmospheric 2011 Johannisbaum successfully transferred a gospel passion play moment into modern contemplation; and Benjamin C. S. Boyle’s Italo Calvino-based Empire of Crystal (2016) was luminous.

Jackson’s Rigwreck, completed in 2013 with words by Pierre Joris, examined the terrible effects of the Deepwater Horizon disaster in 2010. This work, marked by both abrasiveness and elegance, harmonies and grating anger, is a damningly effective condemnation of commercial arrogance.

Ted Hearne’s astonishing, unnerving Animals – in some ways, the evening’s political and artistic center-piece – was commissioned for this occasion by The Crossing and the Park Avenue Armory. The work opens with The Crossing’s singers making the sounds – howls, screeches, warbles, purrs – of animals and turning them into densely, musically satisfying presentations of sentient beings’ experiences of pains and contentments, fears and calm. From the animal sounds, words gradually emerge, and Donald Trump’s condemnation of immigrants emerges with terrible clarity: “These aren’t people. These are animals.” This brilliant, deeply angry work concludes with frightened whimpers: baby animals’ cries of need transform into abandoned immigrant children’s exhausted wails. 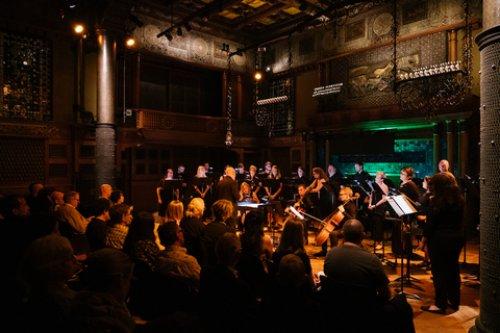 Performers and audience at The Crossing’s “Of Arms and the Man” concert on September 20, 2018 (Photo credit: Da Ping Lao)

The concert was book-ended with works by David Lang. The concluding last spring was graceful, deeply sad and luminously lovely.

The Crossing always presents music and ideas that are deeply rewarding. In Of Arms and the Man, the creative collaboration with the Park Avenue Armory was particularly fine.

Running time: 90 minutes with one intermission