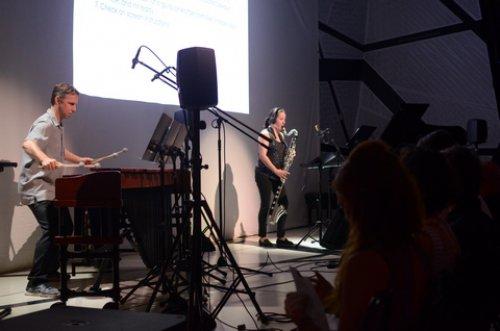 In the 2017 New York City Electroacoustic Music Festival, the concluding seven concerts of the twenty-nine-concert festival took place at Brooklyn’s intimate and versatile performance space, National Sawdust. Some of the most successful works presented – among nearly seventy pieces ranging in quality from fair to truly excellent – were those which tackled substantive issues, whether political, moral or intellectual.

In format and aesthetic vocabulary that ranged from fun and frivolous to abstract and conceptually dense, several works concerned themselves with creative processes and the nature of creativity itself. All of these tackled questions of inspiration, authorship, chance and medium.

In light-hearted Rationalize (concert 27), composer Cody Brookshire combined found and manipulated sounds created by the audience with live music on bass clarinet and marimba. Brookshire created SynkroTakt, an audio streaming technology. Before the piece began, the composer instructed the audience on the seven-step procedure required to enable their devices to create sounds streamed into synchronous audio tracks; the audience, in this way, became the collective ‘artist/musician’ and provided one half of the ‘duet’ of electronic sounds and live instruments. The result was an unexpectedly sweet and pretty piece, a bauble in which sounds produced by an unusually concocted combination of chance and intention became a contemporaneous agent of creativity.

In How to Listen to Machines: Refrigeration Fan in E-flat Major (concert 28), violinist and composer Jordan Hall examined the ability of the most mundane sound-producing object – a household refrigerator fan – to produce sounds that can be made musical. As the fan sounds play, Hall played the violin in something like a duet: a series of small microbowings gradually expanded out to a full-throated, emotional musical declaration. In the end, the piece had an oddly nineteenth century concerto feel to it: quite consciously, a familiar creative impulse had been adapted to such odd instruments as a violin and … a refrigeration fan. 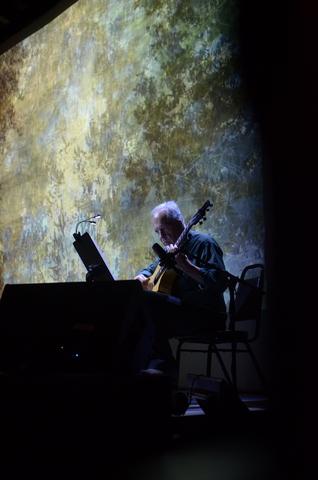 In Concert 27, Chinese-born, American-trained composer Wuan-chin Li, now on the faculty at Fu-jen University and National Tsing Hua University, presented Ban Shan, “a story about … a young medium who also represents the bodyguard of a Taiwanese god.” Electronically processed drum and a Taiwanese Hand Gong sounds accumulate in increasingly intense cycles of rising, dipping, rising again and then swooning down; an impression of combined dancerly delicacy and cosmic largeness emerges, and the protected god became a powerful force of creativity.

The technology of electronic sounds, together with visual performance elements, provided elegant and fascinating parsings of creativity.
In German composer Jacob Sello’s Catch_up (concert 26), “an experimental realtime composition for ensemble and dancer” explored a dancer’s apparent ability to create music: as Christine Witte, a superbly eloquent dancer of powerful stage presence, moved, the clarinetist, pianist and cellist of Unheard-of//Ensemble replicated her movements in musical sound. In reciprocity between dancer and musicians, music-of-the-future was literally embodied in the present moment; soundless movement became Delphic, a divine control of what was to come next. Creativity – the interconnectedness of idea and medium – was gorgeously taken apart, examined for its component parts and then reassembled.

Chi Wang’s Ling Tin (concert 23) presented gamers as both creators and priests; Wang herself performed. “In this piece, the performer interacts with the two contractible strings of the Gametrak controller that moved between different states of tension and release to express the emotional journey between the individual and the exposure to the Buddha Recitation.” Wang directed the data streams to produce both the richly complex music and the simultaneous visual image of her as performer-creator. 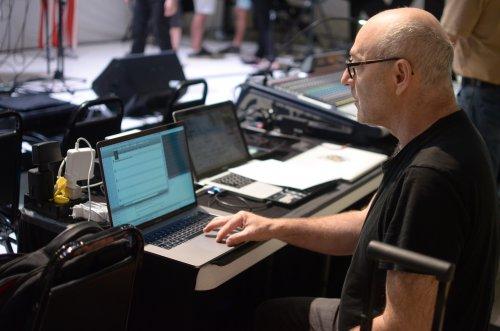 Korean composer Jonghyun Kim’s Live Performance for Leapmotion (concert 28), the very last piece of the very last concert of the festival, explored some of the same issues as Wang’s Ling Tin. Using granular synthesis, Kim used his hands to create new sounds with the motion sensors of the Leapmotion machine. In performance, Kim made himself into scientist, magician, priest and trickster; even when he was momentarily motionless, a mad scramble of created sound emerged. With entirely modern electronic control, Kim was an old-fashioned composer.

As demonstrated over and over again in this Festival, science and imagination have created new vocabularies for musical and artistic expression. American and international universities support innovative intellectual and artistic endeavors with both traditional undergraduate and graduate programs such as music composition and theory and relatively new programs such as musical arts with emphasis on data driven instruments, musical creativity and the environment, music technology, experimental music and digital media, music cognition, music and arts technology, computation for art and design, and computer music and multimedia.
In spite of financial challenges and complex demands on performance sites, this music is important, sometimes even thrilling. These are exciting times for artists and for audiences.