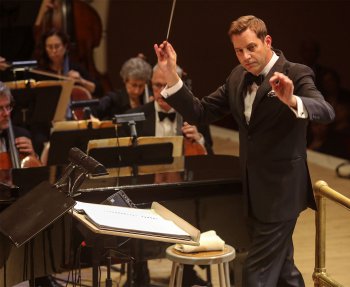 In the 40-plus years in which his career spans, the one word that comes to mind that most satisfyingly describes composer John Williams is prolific. In a one night special event meant to honor the most accomplished and famous film composer alive in the modern era, The New York Pops planned an evening which chronicled Williams’ career, specifically focusing on his partnership with long-time collaborator Steven Spielberg, and his significant contribution to the legacy of the Star Wars saga.

As is the tradition when attending a night at the symphony, the show never begins until the conductor has taken the stage. In the case of The New York Pops, this would be Steven Reineke, who has been their resident conductor since the 2008 season. After the charming and amiable conductor—whose persona is as much a part of The New York Pops as his orchestra—took the stage, he gave a brief speech gushing with admiration and respect for the evening’s honoree. Following this, the members of the orchestra got their respective instruments into position, and with the first swing of Mr. Reineke’s conducting baton, the evening commenced.

Moving chronologically, the first performance of the evening was the theme song for the movie that sparked the longstanding collaboration between Williams and Spielberg, Jaws. A powerful and captivating piece, the underlying terror written into this composition was amplified by the generous acoustics of Carnegie Hall.

Though the evening was studded with some of the more famous and mainstream orchestral pieces of William’s career—namely the March from Raiders of the Lost Ark or the Theme from Jurassic Park, the evening also highlighted some of the more experimental pieces that came with Spielberg’s influential works of science fiction. A series of excerpts from Close Encounters of the Third Kind, as well as a suite from E.T. the Extra-Terrestrial, shed light on the fact that, though Williams is gifted at the art of creating a catchy melody, he is also an expert at concocting complex, ethereal music that makes the world of science fiction seem wholly believable. 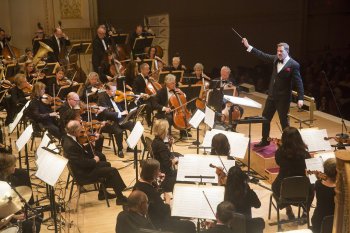 Aside from his panache for creating both haunting and riveting compositions, Williams also is a master at instilling sensitivity in his music. Near the end of the first act, this was put on full display in a moving performance of The Flight to Neverland from Spielberg’s spin on the story of Peter Pan, Hook.

In the second half of the evening, Williams and Spielberg’s more recent collaborations were featured including “Dartmoor, 1912” from War Horse, a moving piece that exudes a particularly rural sensation; a piece which flares the imagination and feels like it is being conducted from horseback.

Bringing the evening to a close was a tribute to arguably Williams’ most iconic projects, those of the Star Wars saga. Starting with a performance of the Theme from Star Wars: Episode IV-A New Hope, followed by a suite of songs from the most recent chapter in the saga, Star Wars: Episode VII-The Force Awakens, William’s contribution to the Star Wars universe is transcendent, imaginative and extremely powerful.

Performed with the utmost precision, each piece and movement was conducted with a notable sensitivity and respect, and the skill of Mr. Reineke’s artists was on full display for the duration of the evening.  It would have been enough in itself to sit and listen to the canned music of John Williams—for it is truly that enjoyable, but the combination of the New York Pops orchestra at Carnegie Hall and the music of John Williams made for a truly unique and gratifying experience that won’t be soon forgot.

The New York Pops: The Music of John Williams, from Spielberg to Star Wars (April 8, 2016)