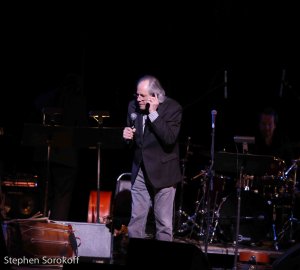 Robert Klein in a scene from “From Moses to Mostel: A History of the Jews” at The Town Hall (Photo credit: Stephen Sorokoff)

Perhaps the title From Moses to Mostel: A History of the Jews (According to Musical Theatre) was a bit of a hyberbole.   Although it was a fairly extensive program of songs, mostly written by or associated with Jewish artists assembled to provide a warm and funny portrait of decades of Jewish contributions to theater, it fell short of providing much of a history as scripted by Glen Berger.  Entertaining it was, yes, but comprehensive, no.

Robert Klein, the comedian/actor/writer, was the laid back host whose shtick—a cell phone conversation with God (a humorless lady)—provided the backbone of the show.  Klein had to prove to the very distracted all-powerful lady that the world was worth saving.  From this fragile premise came a very amusing, slightly overlong, program, performed by a large band conducted by Frank London and four fine singers: Joanne Borts, Rachel Stern, Rob Evan and Steve Rosen, plus a guest artist or two.

The songs were programmed vaguely chronologically, beginning with “Lost in the Stars” (Weill/Anderson), sung by Rachel Stern, as an artistic vision of the creation of the universe, soon followed by “Here In Eden” (Bock/Harnick), Eve’s song from The Apple Tree delivered with girlish glee by Joanne Borts.  Then there was Noah as portrayed in Richard Rodgers/Martin Charnin’s Two By Two.  “Put Him Away,” sung by all four singers portraying Noah’s sarcastic, exasperating family, as not having much faith in his plans to survive the flood.

Biblical stories abounded with references to Book of Daniel in the rousing “Mene Mene Tekel” (Harold Rome’s Pins and Needles); “Song of Ruth,” the inspirational Kurt Weill/Franz Werfel number from The Eternal Road; and, of course, the Jesus of the Lloyd Webber/Rice Jesus Christ Superstar, from which “Heaven on Their Minds” was powerfully interpreted by Rob Evan. 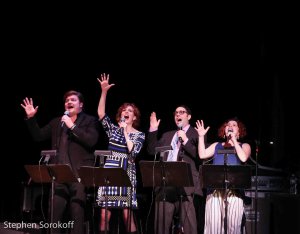 Rob Evan, Joanne Borts, Steve Rosen and Rachel Stern as they appeared in from “From Moses to Mostel: A History of the Jews” at The Town Hall (Photo credit: Stephen Sorokoff)

Mel Brooks’ “The Inquisition” turned the dark period of the Spanish Inquisition into a hilariously profane ditty while the more uplifting “In My Own Lifetime” (Bock/Harnick), sung by Rob Evan as Meyer Rothschild, was about his wish for a better future for his family (which we know came to pass).

The Nazi era couldn’t be avoided.  Kander and Ebb’s “If You Could See Her Through My Eyes” from Cabaret was a sharp snapshot of that period’s anti-Semitism, rendered with undisguised glee by Steve Rosen.  A funnier look at the Nazis came with Lionel Bart’s “Who’s this Geezer, Hitler” from Blitz! amusingly sung by Rachel Stern.

Although “River of Tears” (Harold Rome) from a strange 1965 musical, The Zulu and the Zayda, performed by the brilliant Klezmatics was lovely and sad, it was a bit out of place.  The real klunker was “Edelweiss” (Rodgers/Hammerstein).  Although nicely interpreted by Joanne Borts and The Klezmatics, a song that even remotely honored Austria during World War Two caused more than a few confused looks within this audience.

Lovely Falu, a singer and dancer in the South Asian style, added her micro-tonal vocals to a few of the songs, somehow giving them a truly timeless quality.

Each singer had brilliant, take-charge moments and also worked well as part of the ensemble. The evening was directed by Eleanor Reissa.

The talking to God gag quickly became tiresome, but Robert Klein kept the energy flowing until the very end.

From Moses to Mostel: A History of the Jews (According to Musical Theatre) (February 27, 2016)