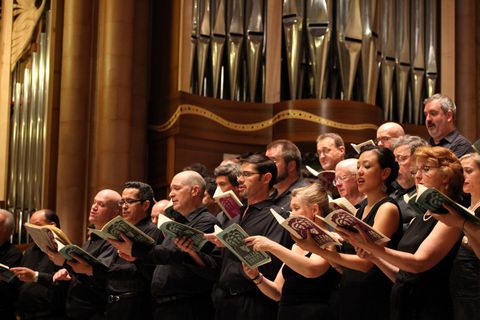 Voices of Ascension in concert

Directing the Voices of Ascension with his characteristic artistic clarity and intellectual integrity, Dennis Keene presented an elegant evening of choral music from the Russian Orthodox tradition together with the Fauré Requiem.

The first half of the concert consisted of a cappella choral works by four major Russian composers.

Peter Tchaikovsky’s brief “Blessed Are They” opened the program. From the absolutely precise and confident opening choral notes, Keene and the singers of the Voices of Ascension established the high standard of performance excellence that characterized the whole evening. Tchaikovsky’s music was conveyed in all of its rich subtlety and its depth.

Following Tchaikovsky came six of the most beautiful movements of Serge Rachmaninoff’s All-Night Vigil. Here, too, the chorus sang brilliantly, revealing Rachmaninoff’s capacity to make voices sound orchestral and to develop the chiaroscuro of the piece’s changing moods and shifts from delicate quiet to magisterial grandeur.

Grigory Lvovsky’s famous “Lord, Have Mercy” has the feel of a happy puzzle about it. The text comes from the moment in the Russian Orthodox liturgy when the priest elevates the cross and  petitions God for mercy; in response, come two sequences of 78 repetitions of the plea “Lord, have mercy” that, in Lvovsky’s hands, are giddy feats of musical acrobatics. In the midst of the most profound request for God’s forgiveness and grace, this particular music has a feel of delirious delight to it. The chorus conveyed that feeling with evident pleasure. 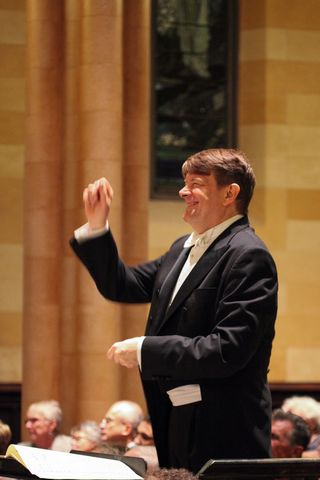 Maestro Dennis Keene at the podium

The first half of the program concluded with Nikolai Tolstiakov’s dramatic “Bless the Lord,” presented with appropriate and robust drama by the Voices of Ascension, and enthusiastically received by their audience.

Taken together, these beautiful performances highlighted the late nineteenth to mid-twentieth century convergence of Russian liturgical choral conservatism with patterns of European and even American musical romanticism in Russian sacred choral music. Keene sympathetically and generously brought out the shared musical inheritances and commonalities among these four composers.

The second half of the concert consisted of Fauré’s Requiem.

This familiar, deeply loved work – an examination of requiem themes that is more about interior considerations of mortality than about cosmic confrontations with hell or pleas for salvation – depends for its success on clear, clean musicianship. The shimmery delicacy and complex harmonic richness of Fauré’s music were brilliantly served on this evening by the Voices of Ascension … as they always have been: the Fauré Requiem has been a signature piece of this chorus since its creation twenty-five years ago. In this performance, soprano Sarah Shafer and bass-baritone Evan Hughes both brought a deeply personal sense of prayer to their singing. Shafer’s “Pie Jesu” was intimate without being sentimental, and ethereally beautiful. Hughes sang with unrestrained and eloquent passion.

The element of unrestraint that characterized both Shafer and Hughes’ singing was matched only once in the choral singing: when the chorus “met” Hughes in the “Dies illa” portion of the “Libera me” movement, the choir seemed for a moment fully released into the intensity of the music. It was thrilling.

Keene elicits a tremendously precise musicianship from his chorus. They sing with unerring accuracy and their sound emerges as a meticulous obedience to the scores they sing from. Keene conducts singers and instrumentalists alike not as composers’ interpreter but as their servant.  The result is often – as was the case on this evening – music of elegant loveliness.

Voices of Ascension: Fauré Requiem and Music from the Russian Orthodox Tradition (February 4, 2015)

For further information on the Voices of Ascension Twenty-fifth Season: 212-358-7060 or