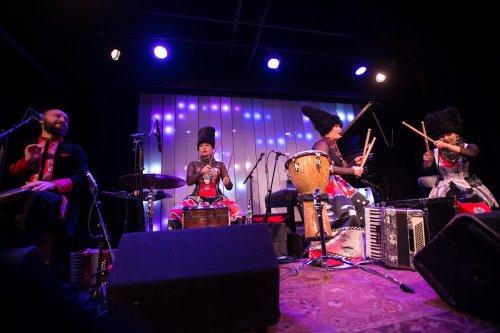 DakhaBrakha as they performed at Littlefield on November 19, 2017) (Photo credit: Bill Farrington)

DakhaBrakha’s recent performance at Littlefield in Brooklyn was a wild and wonderful experience. It was fun and funny and funky. It was mysterious. It was intimate; it was rollicky; it was both very foreign and completely universal.

DakhaBrakha’s background, identity and project are so hard to explain that the intensely fresh and creative immediacy of their performance seems implausible. But, in fact, DakhaBrakha’s music is marvelous and their presentation of it, irrepressibly enthusiastic.

DakhaBrakha is a Ukrainian quartet. The name of the group means Give-Take and they describe themselves as “an ethnic chaos band.” The descriptor, so disconcerting in the abstract, somehow makes sense after one has experienced a DakhaBrakha performance.

Playing both traditional and modern instruments, usually amplified, all four musicians supplement and expand Ukrainian folk melodies and songs with rhythmic and stylistic adaptations as well as other-culture  borrowings from music from as far away as Australia, North Africa, North America and India as well as from other former Russian Empire provinces. The result, unexpectedly, is stunningly coherent. 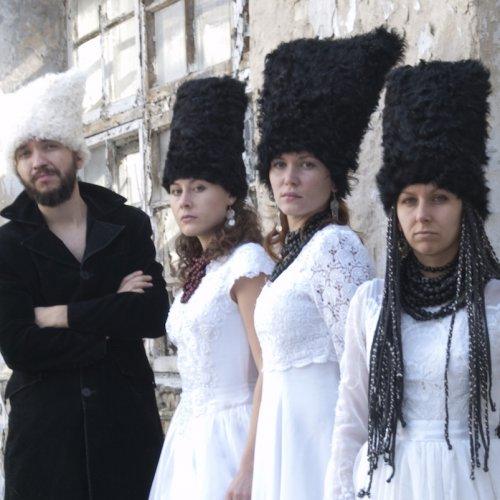 The four remarkable band members – Marko Halanevych, Olena Tsybulska, Iryna Kovalenko and Nina Harenetska – are all skilled vocalists, able to sing in traditional folk-song styles, in Middle European vaudeville styles and – unexpectedly — thoroughly modern evocations of blues and rap-like styles. In addition, these musicians are multiply skilled instrumentalists: tabla, all sorts of drums, flute, harmonica, accordions of several sizes and ages, ukulele, piano and cello are all played in ways that would both reassure and unnerve the DahkaBrakha musicians’ spiritual ancestors.

DahkaBrakha has been developing its particular performance style for more than a dozen years. Founded in 2004 by avant-garde theater director Vladyslav Troitskyi at the Kyiv Center of Contemporary Art, DakhaBrakha is grounded in theater as much as in music. DakhaBrakha presents its music – a tightly, effectively developed set of national songs, stories, ballads, and moody explorations of the human condition – with a disciplined skill that passes almost unnoticed beneath the earthy, intimate welcome of the musicians’ close bonds with each other and their audience.

A single song can start out as a near-whispered exchange of confidences between a woman and her closest friends – all of us in the audience – and end up in sensuous polyphonic wails or a chest-crushingly loud dance-and-holler crash. The crescendo of melodic sound and rhythmic complexity builds in size and intensity and then ends in absolute and complete control as the crowd shouts for more. Only incredibly skilled musicians and performers can pull off this kind of virtuosity.

The musicians present themselves in what seems at first glance like traditional costume. Halanevych wore an elegant vyshyvanka shirt; the women wore red-and-white belted sarafans, layer-upon-layer of powerful metal bead necklaces and astonishing high black fur hats. But within the inherited visual vocabulary of the costumes lurked sly references to pop-culture modernity: on the women’s skirts, for instance, centuries-old talismanic symbols of magic power, personal agency and natural bounty are printed and embroidered in evocations, at once ironic and exuberant, of 21st century action-figure style.

DakhaBrakha turns the historicism of folk material on its head: trained ethnomusicologists as well as passionately engaged performers, DakhaBrakha musicians build on two of traditional music’s most important features. 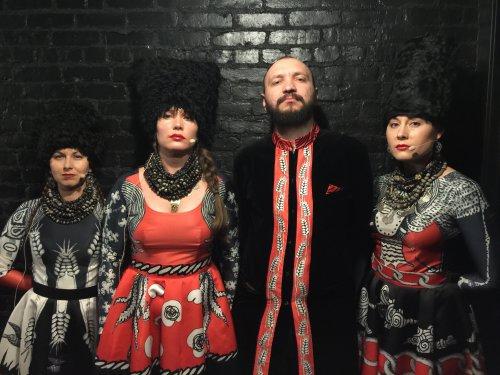 Second, folk songs have a mystical element to them: their timelessness dwarfs fads and reminds us all that, ultimately, nature’s seasons and cycles and inevitabilities of life and death, confusion, and re-engagement transcend us all.

DakhaBrakha’s music has both a seductive subversive pulse and a cosmic pull to it. And throughout: the audience couldn’t have been more thrilled. Ululating, clapping, laughter and periodic singing-along, even in the tightly packed night-club space, simply could not be contained. Over the space of an hour and a half, the music turned the audience into a party: an exceptionally diverse and multigenerational group: Ukrainian, Russian and Middle European immigrants, professional folklorists, World Music Institute regulars and funky-groovy Brooklyn music lovers danced briefly together as though they’d all known each other for years.

DahkaBrakha is engaged in a deeply serious intellectual and creative endeavor. Simultaneously, they make fabulously fun music. What could be better?