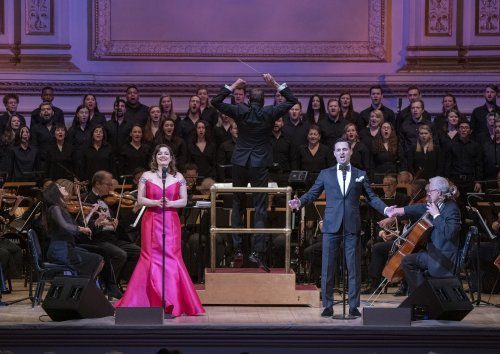 Laura Michelle Kelly and Max von Essen with music director and conductor Steven Reineke as they appeared with The New York Pops and Essential Voices USA in “Find Your Dream: The Songs of Rodgers and Hammerstein” on January 24, 2020 (Photo credit: Richard Termine)

The New York Pops’ latest concert, Find Your Dream, was a glorious tribute to nostalgia. Not only was it an evening of the beloved songs of Rodgers and Hammerstein with selections from all 11 of their collaborations, it also recreated a performance first presented five years ago by The Pops. The guest artists on the evening of January 24 were British musical theater star Laura Michelle Kelly (Broadway’s Mary Poppins and Finding Neverland) first seen in a flaming red, off -the-shoulder gown and American musical theater star Max von Essen (Broadway’s An American in Paris and Anastasia) in a midnight blue jacket. Joining The Pops as usual was Judith Clurman’s Essential Voices USA who were an integral part of the show with the famous choral numbers.

Steven Reineke, The Pops’ music director and conductor, also served as the evening’s genial host relating that Rodgers and Hammerstein II in their 17 year collaboration won 34 Tony Awards, 15 Academy Awards, two Pulitzer Prizes (1944 and 1950) and two Grammy Awards. Performed in chronological order, the program began with a spirited rendering of the Overture and Main Title from the film version of Oklahoma!, followed by von Essen’s “Oh, What Beautiful Mornin’”which included the Essential Voices USA in a choral portion. Kelly and von Essen continued with a second Oklahoma! selection with the duet, “People Will Say We’re in Love” which ironically (though appropriately) has the singers performing solo until the ending of the song. 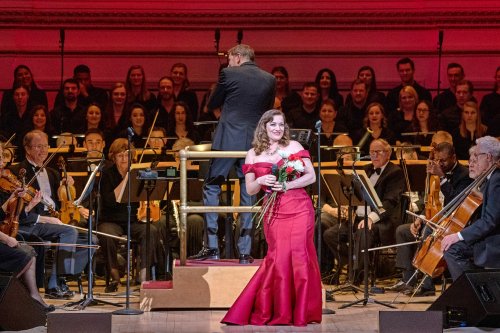 Laura Michelle Kelly with maestro Steven Reineke as they appeared with The New York Pops and Essential Voices USA in “Find Your Dream: The Songs of Rodgers and Hammerstein” on January 24, 2020 (Photo credit: Richard Termine)

While most of the musical numbers were performed in the orchestrations by Robert Russell Bennett, Rodgers’ usual collaborator, the orchestral selection, the whirling “The Carousel Waltz,” which allowed The New  York Pops musicians to shine was that of of Don Walker whose work was used in the original 1945 production as well as the 2018 Broadway revival. This was followed by von Essen’s fine take on the notoriously difficult “Soliloquy” which runs seven minutes. The section was concluded with the inspirational, “You’ll Never Walk Alone,” which brought together Kelly, von Essen and Essential Voices USA and received a huge ovation.

The next two Rodgers and Hammerstein collaborations were heard in one song each: Essential Voices USA in the lilting and bouncy “It’s A Grand Night for Singing,” from R&H only original film score, the 1945 State Fair, and Kelly’s rendition of “The Gentleman Is a Dope” from the team’s experimental 1947 musical, Allegro. Kelly demonstrated that she was best with dramatic material like this in which she had an actual character to play. 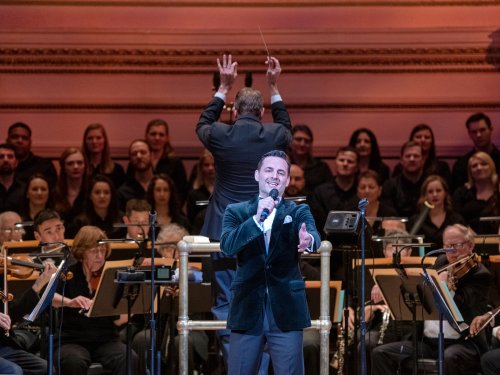 Max von Essen with maestro Steven Reineke as they appeared with The New York Pops and Essential Voices USA in “Find Your Dream: The Songs of Rodgers and Hammerstein” on January 24, 2020 (Photo credit: Richard Termine)

South Pacific, Rodgers and Hammerstein’s 1949 Pulitzer Prize winner, warranted four musical numbers. Reineke pointed out that the show was culturally significant as it dealt with the then taboo topics of racism, prejudice and social injustice. Von Essen sang a fiery version of “You’ve Got to Be Carefully Taught” (with the line “a mean little world of mean little men”) which touched the audience for all the right reasons. Kelly sang a joyous rendition of “A Wonderful Guy” accompanied by the Women of Essential Voices USA as she threw red and white flowers to the audience.  Tenor von Essen acquitted himself well with a powerful “Some Enchanted Evening,” originally written for a bass-baritone. The first half of the evening was brought to a close with the Men of Essential Voices USA singing a bouncy and quick-paced version of “There Is Nothin’ Like a Dame” with the help of one bass and eventually the women’s chorus as well.

The second half of the evening began with a dramatic and lilting rendition of the Overture to The King and I (1951), in the Ted Sperling adaptation created for the 2015 Lincoln Center revival of the hit musical. Kelly and von Essen, dressed in variations on their earlier outfits,  returned with a romantic and powerful duet of “I Have Dreamed” in which Kelly used a lower register which suited her voice admirably. Essential Voices USA followed up with a delightful “I Whistle a Happy Tune” which showcased their wonderful diction.

Maestro Steven Reineke with The New York Pops and Essential Voices USA as they appeared in “Find Your Dream: The Songs of Rodgers and Hammerstein” on January 24, 2020 (Photo credit: Richard Termine)

The two hit songs from R&H’s poorly received Me and Juliet (1953), with an original backstage story by Hammerstein II, and Pipe Dream (1955), based on John Steinbeck’s Sweet Thursday, followed in chronological order. Reineke recounted how the melody to the hit song from Me and Juliet, “No Other Love,” would have been familiar to audiences who had watched the television mini-series Victory at Sea as Rodgers had previously used the theme in his original score for the series under the title “Beneath the Southern Cross.” This hauntingly romantic number sung by Kelly and von Essen, each to the other, had been a #1 hit song for Perry Como in 1953 on both the Billboard and Cash Box charts.

Reineke pointed out that Pipe Dream was not the usual R&H material as it was set in a bordello and with a prostitute for a heroine.  So worried about alienating their loyal audience were Rodgers and Hammerstein that they rewrote the script so many times that it was not clear what was going on by the time it reached Broadway. However, Kelly sang the liltingly lovely ballad, “Everybody’s Got a Home But Me,” which was ecstatically  received by the audience. From Rodgers and Hammerstein’s only original television musical came the lush “Cinderella Waltz” (1957) which gave the team an opportunity to work with recent discovery Julie Andrews. As played by The New York Pops orchestra, one could see the dancers spinning around the ballroom at the Prince’s palace. From R&H next hit, Flower Drum Song came “I Enjoy Being a Girl” in which Kelly acted it out to the hilt in her best song of the evening. 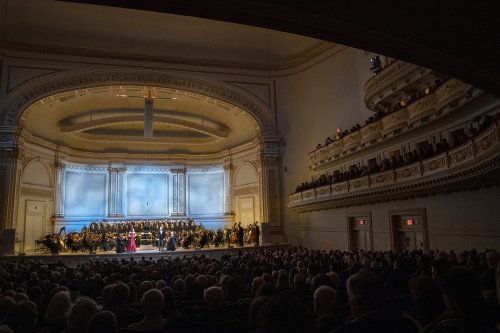 The cast and orchestra of The New York Pops in “Find Your Dream: The Songs of Rodgers and Hammerstein” as they appeared at Carnegie Hall on January 24, 2020 (Photo credit: Richard Termine)

“Find Your Dream” ended with five numbers from The Sound of Music (1959), Rodgers and Hammerstein’s last show together and their last megahit. The selection began with the Prologue in the Irwin Kostal orchestration written for the film version, which resembles a tone poem. Kelly followed this up with a lush rendition of the title song which immediately followed the Prologue in the pre-credit sequence in the film. “Edelweiss,” the last song that Hammerstein ever penned, was written in Boston as Rodgers thought that Captain von Trapp needed a song of his own in the second act. The hymn-like quality that von Essen evoked in his expression of this song received the biggest ovation of the evening. The program ended with the inspirational “Climb Ev’ry Mountain” as a big production number with Kelly, von Essen and the entire Essential Voices USA. “Do-Re-Mi,” used as the encore for the concert, included all of the previous performers who were also joined by chorus director Judith Clurman. Audience participation was invited for this ever-popular song.

If there was one criticism of this glorious concert, it was that the program did not include any rarities from the Rodgers and Hammerstein canon, using only the most famous and well-known songs. It might have included some of the songs cut from these shows that have remained unfamiliar. The uncredited sound design was more flattering to Max von Essen’s tenor than Laura Michelle Kelly’s soprano, often the case with today’s transistor sound. Both performers spoke off-the-cuff briefly, Kelly recounting it was exactly one year to the day that she was married in Hawaii in 2019, while von Essen declared this was the happiest day of his life as he never imagined he would be singing on the stage of Carnegie Hall, and that it was a dream come true.

The New York Pops: “Find Your Dream: The Songs of Rodgers and Hammerstein”