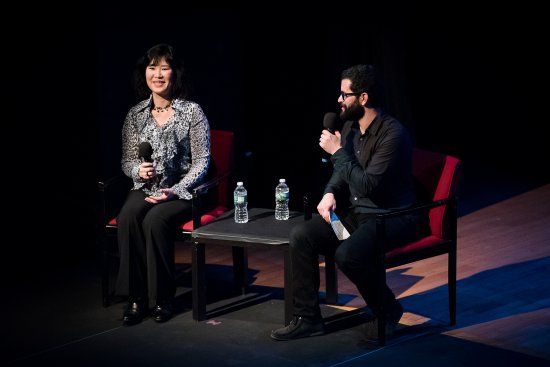 In her first appearance in the Composer Portraits Series of Miller Theatre at Columbia University, composer Misato Mochizuki told the audience that when she teaches at Meiji Gakuin University in Minato, Japan, she is often challenged to think about very fundamental questions. She said that her students are general culture students, not music students, and that they ask her about “basic messages” and “simple meanings” in music.

Anyone who heard five of Mochizuki’s marvelous works, dating from 1998 to 2010, in Miller Theatre’s most recent Composer Portraits evening would recognize that her music is about quests and seeking, the relationship between cycle and narrative, invitation and exhilaration: her music asks important questions about how to make sense of human experience.

Although Mochizuki has written most of her music for traditional Western instruments, she occasionally incorporates Japanese instruments. Musicians who play her works must – at the least – have superb technical facility; in the members of JACK Quartet, Yarn/Wire, and oboist James Austin Smith, Mochizuki also had artists whose hallmark, individually and collectively, is a deep commitment to matching their own creative integrity to that of the composers they work with. 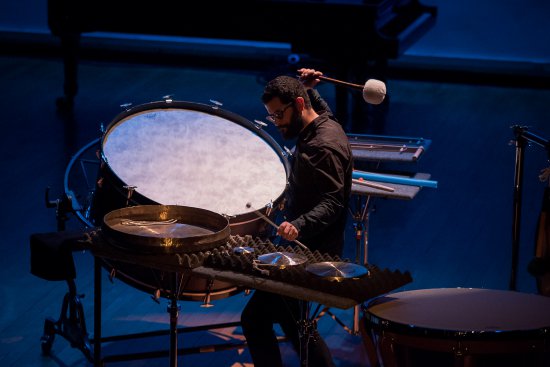 In the opening piece, Quark-Intermezzi III, percussionist Russell Greenberg, the solo performer, entered the dark stage swinging buzz bows, “a modern form of one of the most ancient instruments, the bull roarer,” according to Paul Griffiths’ always useful program notes. As the buzz bow moves through the air, slowly at first and then fast, in cycles, the whole history of music is recreated: air moves against itself creating sound, and the generated sound builds on itself in pitches and rhythms that summon and call. Beginning and questing prove to be identical.

As the percussionist moves from buzz bows to traditional and non-traditional instruments – a ball rubbed against a tam tam; spring drums and whistling; timpani; Japanese rin – in successive bursts of engagement and silence, patterns of experiment and questions are established. The second-to-last brief movement is a wild let-loose, a virtuosic dazzlement masquerading as unhingement – as it turns out, one of Mochizuki’s happiest regular destinations – followed then by a short sequence of single, resonant and huge conclusion notes.

The audience didn’t applaud after this first piece because during the big, dark emptiness of its conclusion, the pianist, Ning Yu, entered, sat down and began the second piece, Moebius-Ring. This choreographic linking of the two pieces had a clear conceptual purpose. The solo piano piece carried some of the same preoccuptions with beginning, and then with beginning again, that marked Quark-Intermezzi III, though Moebius-Ring contained more familiar Western features: something like a funeral march progressed towards Romantic grandeur that fell at last into a dramatic cascade towards silence. 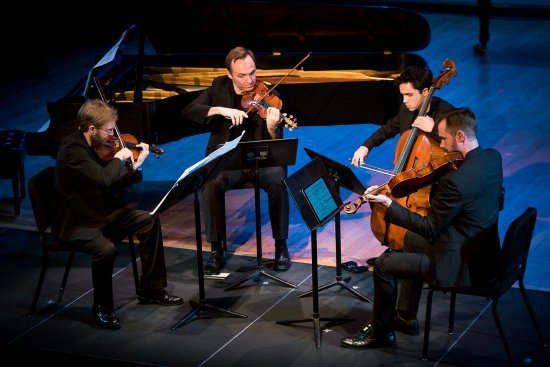 The first piece of the second half of the program, after the brief conversation between Greenberg and Mochizuki, was Au bleu bois for solo oboe played by James Austin Smith. In this short, but densely rich, beautifully performed piece, every bit of the oboe’s expressivity was explored: its plaintiveness, its sexiness and earthy call were all fearlessly and poignantly presented. Au bleu bois is a Pan piece: instrument and player are simultaneous myth carriers, drawing us into both external landscapes and our own internal selves.

The last piece of the evening, Le monde des ronds et des carrés, was the only piece on the program that was not a U.S. premiere, and it was the piece that made Melissa Smey, Miller Theatre’s Executive Director “just know” two years ago that she wanted to invite Mochizuki to the Composer Portraits Series.  Smey was right. Composed in 2015 for Yarn/Wire, this 13-minute two-piano, two-percussion sets quartet, is about the co-existence of opposing shapes – circles and squares – in physical space and in music. Mochuzuki noted, “I wrote the piece having in mind the seventieth anniversary of the end of World War II and asking myself what leads people to slaughter one another.” As with all of Mochizuki’s work, the musicians are required to perform such demandingly written music that they must almost be athletes as well as artists. They present conflicts, embodying enmity, as though it possesses them; they then, when silence comes at the end, become its possessors. 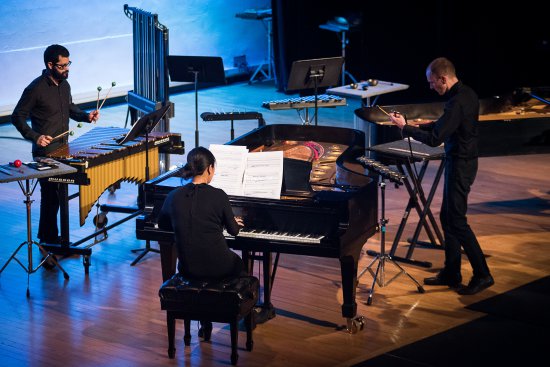 Mochizuki’s music isn’t beautiful in a traditional sense. But Mochizuki isn’t seeking replication or even creation of traditional beauty: she’s involved in a different project. She talks about “an artistic practice … served by curiosity and thought about realms outside my own” and she adds, “I borrow principles and adapt to music systems that speak to my imagination.” She creates “music systems” whose intellectual and artistic coherence is its own loveliness.

Neither a “Western composer” nor a “Japanese composer,” Mochizuki hasn’t sought to manufacture some sort of mix-and-match blend. She doesn’t borrow or build add-ons. Instead, seeking inspiration in nature on the one hand and in human projects as diverse as photography, genetics and cooking on the other, she produces music that is about both being and story. Embedded within every piece one beginning after another, her stories unfold from each; then she builds them into each other. Though she incorporates elements of theater in the use of lighting and musicians’ movements around the stage, her music is fundamentally unpretentious and unfussy; her writing is equally straight-forward and optimistically fresh.

Mochizuki is a thrilling composer; hearing her work presented by musicians such as JACK Quartet, Yarn/Wire and oboist Smith is a wonderful experience.

Miller Theatre at Columbia University School of the Arts

Running time: one hour and 55 minutes with one intermission.