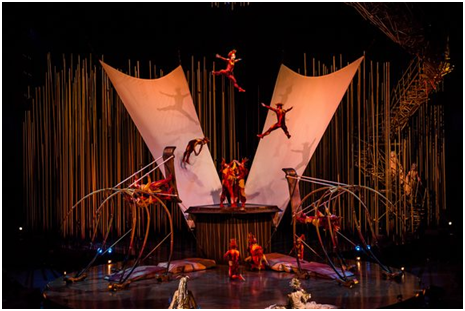 “Hello Brooklyn!” roars the flamboyantly costumed Le Guide, who has a light bulb on top of his head, to the audience at The Barclays Center during Cirque du Soliel’s Varekai. “You go back to Williamsburg! You hipster!” He taunts another character. These topical jokes are about the only intelligible things to be heard, as most of the dialogue is in “Cirquespeak,” a made-up language that combines Italian, Russian, Spanish, French and more.Founded in Canada in 1984, Cirque du Soliel has since gone on to worldwide popularity with its various productions. Its stylishly original manner of presenting an assortment of circus acts has become well known. Varekai premiered in Montreal in 2002, and has been touring the world ever since.

The title is a Romany word meaning “wherever.” The narrative framing device is the Greek myth of Icarus, imagining that of instead of drowning in the sea after flying too close to the sun, he lands in an enchanted forest populated by exotic creatures. 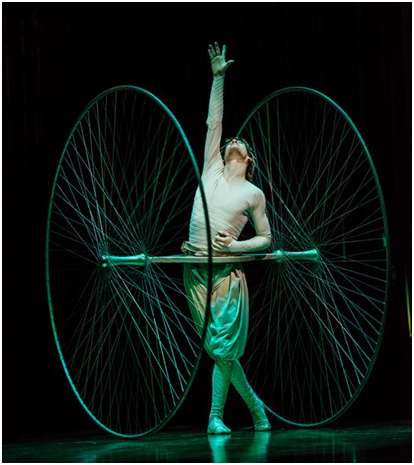 Icarus in a scene from Varekai (Photo credit: Courtesy of Cirque du Soleil)

Icarus is a lean, athletic, young, blond man in a gauzy white outfit who performs an aerial act in a net and appears periodically throughout the show. The rest of the production consists of dancing, juggling, balancing, clowning, flying on straps, aerial hoops, trapeze, a hot air balloon, Russian swings, and an audience member brought up for use during the magic portion.

The set by Stéphane Roy wondrously represents the forest with immense trees, a complex catwalk of branches, and the sea with inventive design on the stage’s floor.

Eiko Ishioka’s mostly Lycra costumes are eye-catching creations that captivatingly depict the many inhabitants and other characters with an array of bold colors and shapes. 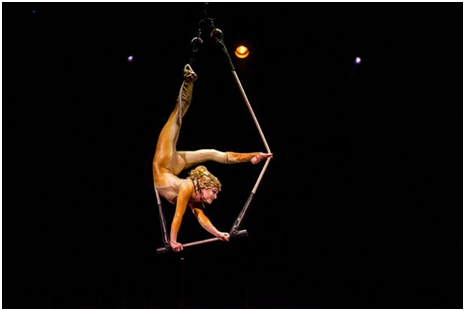 The very effective score by Violaine Corradi is an inventive combination of old ritualistic international melodies with contemporary arrangements. It conveys sadness and excitement and features the voices of a man and a woman, who also relate the story.

The choreography of Michael Montanaro and Dominic Champagne’s direction both expertly showcase the acts to a great degree. However, though all of the performers are excellent in their skills, it really isn’t until the last portion that the show really becomes spectacular. There is an ensemble thrillingly dancing on crutches and a group of acrobats who are amazing on Russian swings. The grand finale has all of the acts and characters interacting on stage as the story is concluded. 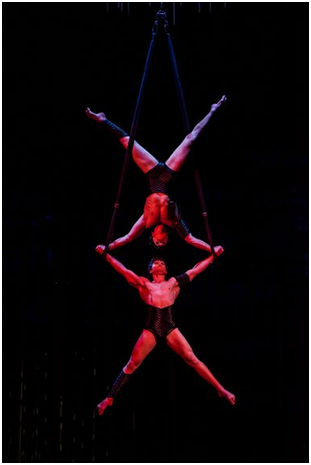 Before that, there is seemingly a dutiful program of what is expected at a Cirque du Soliel show, but without much of a wow factor. The elaborate catwalk is visually compelling but doesn’t get used much during the performance.

Running over two hours including a long intermission results in at times a sluggish pace. Still, fans of, and first timers to Cirque du Soliel, should experience enough excitement to find Varekai, overall satisfying.