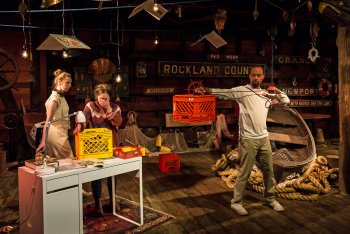 Port Cities NYC is a very unusual theatrical event. To begin with, it is the first part of a five city performance project linking a quintet of cities along 17th century Dutch Trade routes (Perth, Australia; Cape Town, South Africa; Amsterdam, Holland; Jakarta; Indonesia.) It attempts to explore the interconnected heritage and legacy of these cities. The theatrical journey begins at Pier 11 on South Street near Wall Street (which was built by the 17th century Dutch), and continues on a ferry across the East River to Red Hook, Brooklyn.

On the ferry, audience members listen to a previously downloaded soundscape which includes a voice-over by Katie (played by Emma Meltzer) who has always seen ghosts and ends up investigating her family inheritance as an archaeologist, plus a moody original score by Cameron Orr. Upon docking in the working port on the Brooklyn side, audiences walk three minutes to the Waterfront Museum Barge where the live performance begins on the pier in which four actors carry crates slowly towards us. The audience is then invited into the Museum Barge for the actual theatrical performance. 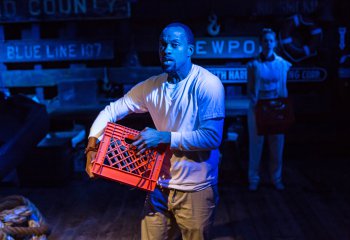 Katie finds herself in a surreal landscape of 1626 in the middle of the Tulip Trade, the first financial market in Manhattan. The story then continues backwards and forwards in time, mixing historic characters with fictional ones, always returning to the days of Dutch New Amsterdam: financial markets, slavery, contemporary violence against people of color, the New York Stock Market, the China Trade, the World Trade Center, the Freedom Tower, 1637 Amsterdam’s tulip market, 1653 when Wall Street was built, the 1990 excavation of the African Burial Ground, and finally Katie’s great-great-grandmother who has a secret.

Unfortunately, the concept is much better than the execution. The use of surrealistic video by Weston G. Wetzel which covers the walls at various times is distracting considering that the segues in Talya Chalaf’s text are hard enough to follow. None of the characters appear long enough for us to really get to know them and the history is told in a shorthand that needs more explanation for the layman who is not up on his history of New York. 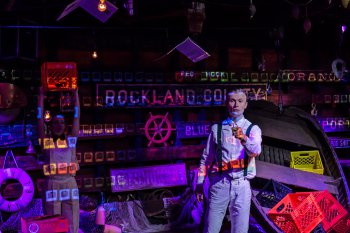 Aside from Meltzer’s Katie, the other actors, Elizabeth Gray, Marcus Crawford Guy, and Nathaniel J. Ryan, play too many characters in too short a time for the audience to follow them. They throw themselves into roles that disappear all too soon. The play seems to have an agenda which is not always lucid, and at times seems to verge on agit-prop without the proper set up. It is never entirely clear whether the interracial make-up of the cast is part of the storyline or simply an example of non-traditional casting.

Chalaf’s choreography is more like movement while her direction is too hurried to help keep the time shifts straight. The prologue on the pier goes on much too long for the content, the carrying of cargo to the barge. While it appears to be Katie’s family story, she disappears for too long of a time, and then shifts the play back to the present day, while the focus appeared to be on the past.  Jung Griffin’s set design is stretched the length of the barge making it necessary to continually swivel one’s head from side to side to follow the actors, while still examining the props and accoutrements of the museum itself. The problem with the soundscape on the ferry from Manhattan is that the background noise makes listening very difficult and then part of the introduction is missed.

Port Cities NYC is a fascinating idea that does not quite come off in its execution. All five presentations from the various parts of the world will eventually be put online at http://www.portcitiesproject.org so that it will be possible to see the interconnectedness of the stories of the five port cities.

Show begins at Slip A, Pier 11 on South Street between Wall Street and Gouverneur Lane, Manhattan, when you listen to downloaded Soundscape on to your MP3 on board ferry