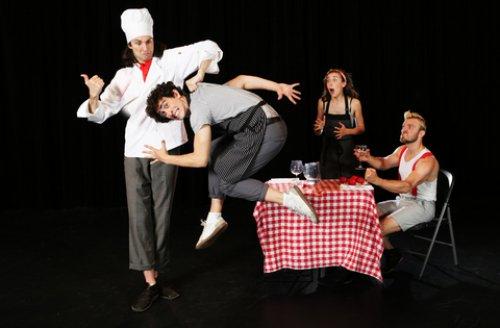 The Atlas Circus Company’s family-friendly Lucky seemed an odd fit with the usual programming at Dixon Place, the home of Lesbian and Gay culture in the Lower East Side. Lucky was, nevertheless, a charmer and a chance for the usual—and unexpected—audiences to bring their kids to experience the amenable ambiance of Dixon Place. And, to be sure, there were a number of eager, involved youngsters in the house to experience this hybrid of vaudeville, circus arts, Commedia, Bill Irwin, Marcel Marceau, silent films and a touch of Sid Caesar that told the story of an everyman, Lucky, who finds himself totally overwhelmed by the Big City.

Even before the show began, cast member Leo Abel used his charm to persuade two young boys from the audience to sweep the stage and dust the piano, making very sure they got it just right.

The audience was entranced even before Lucky began with the entrance of the title character played by the boyish, agile Henry Evans, director of Atlas. The mysterious, but obvious, placement of a banana peel on the floor very close to the audience provided just a bit of tension. Will someone slip on the banana peel? What do you think? 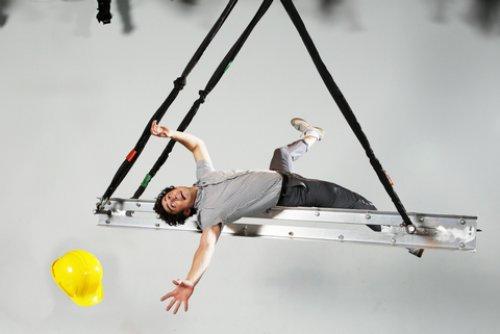 Lucky is divided into short sections that took the exuberantly naïve character from his initial wanderings about the Big City to a number of soulless jobs to falling in love and even, for a particularly spectacular moment, floating high above the stage on a girder construction that offered seemingly scores of ways to hang off it.

Watching Evans being bossed around by the tall beanpole Russel Norris, whether in an office job, cleaning a park or waiting on tables, was to watch classic comedy performed with brilliant, but invisible timing. (Credit choreographer Tyler Holobaski for his seamless contributions.)

Handsome Leo Abel provided yet another comic foil for Lucky whether trying to steal his briefcase or disturb his sleep. The calm, lovely Avery Deutsch was the unattainable love interest. 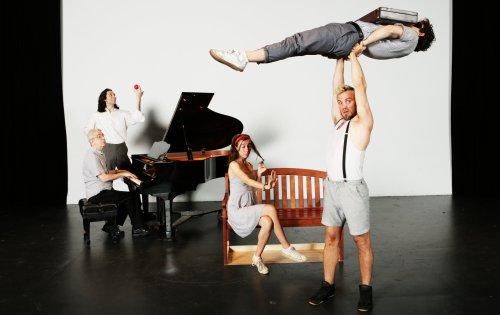 Co-created by Henry Evans and Tommy McCarthy, with creative input by comedic consultant Robbie Motz and the entire cast, Lucky was a fresh breeze, the kind of joyous, human-scaled entertainment that is desperately needed.