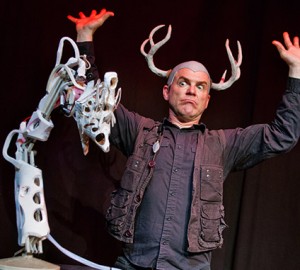 THE FLATIRON HEX tells the story of Wylie Walker, a contract sorcerer who works for NYORG, a city in the middle of a swamp. Storms constantly threaten to destroy NYORG, and as an impending super storm approaches, it is up to Wylie to decipher a mysterious document & utilize the occult power of the Flatiron building to save the city.

What was your inspiration for THE FLATIRON HEX?

My inspiration was the Flatiron building itself and writers like Jeff Vandemeer, Colson Whitehead and Kelly Link. I also found inspiration in the ancient human obsession with weather control and the “fringe science” of radionics. This show is first and foremost a vehicle for me to explore my interest in the occult and its relationship to the jungian shadow and human consciousness.

I joined a weekly class taught by Patrick Bristow, the host of the show. After a few weeks I was invited to join the cast. As a cast member I got to perform with some highly skilled and talented performers and that definitely pushed me to become more efficient and flexible in my improv. It was terrifying and thrilling and intense. Mr. Bristow was fast to capitalize on my strengths as a singer and actor and he really pushed me to get better. His coaching and direction and support was just phenomenal. This show changed my life and I really miss being a part of it, frankly. 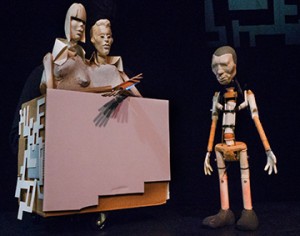 You also won the Jim Henson Award for Innovation and an UNIMA Citation of Excellence for your previous Dixon Place commission, Lunatic Cunning.  Have you collaborated with other Henson Award Winners?

I have not. After working for many years with a large cast and several collaborators I made a conscious decision to create solo performances. I have worked closely with a fellow UNIMA award winner, Tim Lagasse. Tim is one of those genius puppet artists that can build, perform, direct, edit, you name it. We have worked on TV shows and live shows and even a commercial directed by Spike Lee!

If you and Jim Henson could create a puppet fantasy world what would working with Jim create?

I can only imagine that Jim’s imagination and genius for world building would bring about something truly magical. This is interesting because if I contemplate the scenario I feel like Jim would be the idea machine everyone knew him to be, so the possibilities are endless!

Tell me about Wylie Walker, the contract sorcerer in Flatiron Hex.  Are there autobiographical elements in Wylie’s character development?

Wylie is an extension of myself in some ways. I imagine him as being more pragmatic and disciplined in his work. There is a lot about Wylie that I don’t know yet, some elements of his past and such. The unknown elements of his character are opportunities to make discoveries. There aren’t any events in the story that come from autobiographical roots. My previous show, “Lunatic Cunning” was completely autobiographical so I wanted to build a character that exhibited some qualities that I would imagine I would have if I were a super-hero.

You founded a puppetry troupe – The Elementals that worked on several commercial puppetry projects such as SNL’s “the Go Lords” and Nickelodeon’s  “Action League Now”.  Do you prefer live performance or working on video projects?

Both have their positives, but I definitely prefer live performance. Nothing compares to the energy of a live audience and the immediacy of a live theater experience. TV and video can be grueling in it’s repetition but I do enjoy the collaboration and the technical aspects of shooting things on camera. 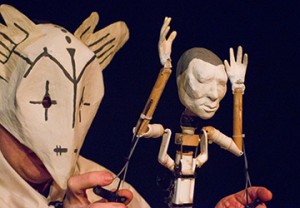 The characters in “The Go Lords” SNL skit appear to be live action figures. In “Lunatic Cunning” your figures look to be claymation.  In other works you’ve used paper mâché.  Is there a particular medium you find most effective for puppetry?

I’ve never done claymation. The puppets from Lunatic Cunning are all performed in real time. I’m really a live action artist. I consider myself a performance artist that specializes in puppets and masks.  My puppets use a wide variety of materials and yes, paper mâché is my preferred medium. I also carve wood. Mostly traditional, low-tech methods.

What are your upcoming projects?

My plan is to make a trilogy that begins with “The Flatiron Hex” I’m also starting on a graphic novel exploring the Flatiron world and characters. The world of “Flatiron Hex” will expand to include some aspects of transmedia storytelling and real world gaming and code-breaking.

A 2014 Jim Henson Award recipient, Godwin utilizes remarkable puppets, masks & mystical neo-noir visuals to tell a story set in a parallel, near-future NYC filled with ghosts, elemental spirits & evil demigods. THE FLATIRON HEX will play six performances only – May 15th, 16th, 22th, 23th, 29th, and 30th at 7:30PM, at Dixon Place (161A Chrystie Street). Tickets are $16 in advance, $20 at the door, and $12 for seniors and students. Tickets can be purchased by visiting http://www.dixonplace.org or by calling 866-811-4111.