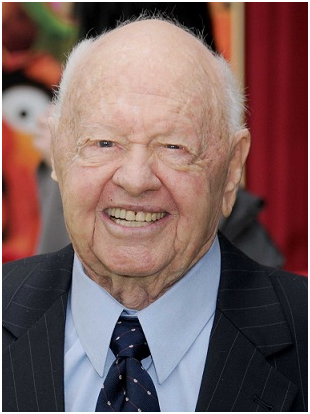 RIP Mickey Rooney. Active in show business since the 1920s–and still working, right up until the end–he was, at his peak, the biggest box-office draw in America. He made several hundred appearances in films and on TV. Hollywood did not always make wise use of his talents; he was often forced to make the most of very lightweight scripts. But oh! how he could shine, when given the chance–as in any musical sequence he ever made with Judy Garland, or in the tremendous Broadway success, “Sugar Babies.” (And he and Ann Miller were crucial to that show’s success; a touring production with other top stars taking their places did not catch on.)

Mickey Rooney was always a treat, whether playing an Average Joe, a gangster, George M. Cohan, or Pinocchio…. I always loved seeing him, on screen or in person. And I liked talking with him. (One conversation we had, late in his life, was a little sad. He noted that for several years he had been MGM’s biggest-money maker; in his heyday, his fans had packed movie theaters from coast to coast; no matter what films he was in. But now, his personal appearances tended to draw modest crowds. Where were his fans, he asked aloud, muttering that audiences were fickle. I didn’t no how to respond. Audiences weren’t necessarily fickle; he’d simply outlived most of his original fans.)

My deepest sympathies to his devoted wife of 37 years, my valued friend Jan Rooney.

Here are a few random clips of Mickey Rooney. He had talent aplenty–even as a child.

And finally, here’s a reunion of Mickey Rooney and Judy Garland on her TV show in the 1960s:

I’m very sorry to see Mickey Rooney go. I loved his work. And I will miss him…..