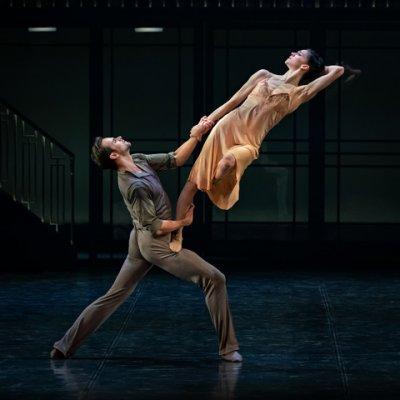 Oleg Gabyshev as Leon and Lyubov Andreeva as Gala in a scene from Boris Eifman’s “The Pygmalion Effect” (Photo credit: Michael Khoury)

Boris Eifman returned to the New York City Center with his vibrantly entertaining Eifman Ballet of St. Petersburg dancing his The Pygmalion Effect, a take on the classic myth of Pygmalion and Galatea, a story charmingly represented with the current production of My Fair Lady at the Lincoln Center Theater.

Funnily enough, The Pygmalion Effect plot hews closely to My Fair Lady’s version of this ancient story:  An experienced gentleman—in this case a champion ballroom dancer—takes in a rough and tumble young woman from the streets and trains her to be his partner.  This young woman even has an unrefined father (shades of Alfred P. Doolittle) who tutors her in the nitty-gritty ways of the street where thievery and rambunctiousness are the rules of life.

By placing his ballet in the realm of the high-strung ballroom world, Eifman supplied himself plenty of excuses to make dances that bounced about the stage to his score of a parade of waltzes, polkas, marches and bits and pieces of the output of some of the many “Waltz King” Strausses (Johann the Son, Josef and Eduard) with one interlude of Mozart tossed in at the end. 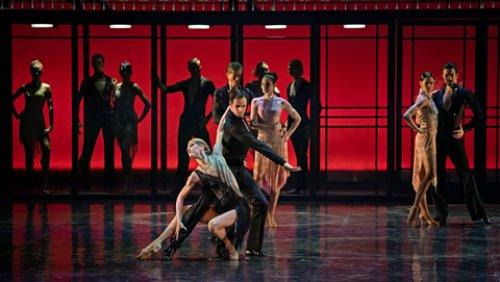 Alina Petrovskaya as Tea and Oleg Gabyshev as Leon with the company of the Eifman Ballet of St. Petersburg in a scene from Boris Eifman’s “The Pygmalion Effect” (Photo credit: Michael Khoury)

Leon, the ballroom champion (an elegant Oleg Gabyshev) was first seen getting dressed tended by his small cadre of maids, led by Greta (a humorously austere Lilia Lishchuk).  Leon, a favorite of the ballroom fans, and his partner Tea (Alina Petrovskaya, beautifully temperamental) lose a competition which eventually leads Tea to seek a new partner.

Gala  (Lyubov Andreeva, quite unafraid to be awkward and beautiful, often at the same time) and her roguish father, the oily Holmes portrayed with great energy and charisma by Dmitry Fisher, had earlier saved Leon from an unruly crowd.  Gala, falling under Leon’s spell begins watching him compete and yearns to be part of his world.  Just as in My Fair Lady, Leon makes a bet with his Coach (a lithe Igor Subbotin) that he could turn the awkward street urchin, Gala, into a fine ballroom dancer. 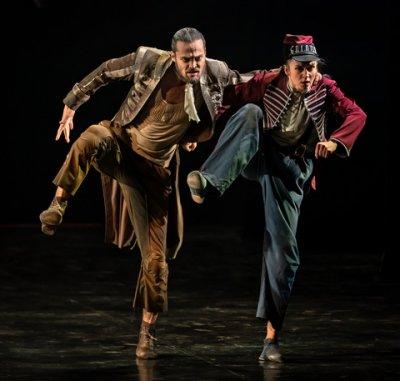 Dmitry Fisher as Holmes and Lyubov Andreeva as Gala in a scene from Boris Eifman’s “The Pygmalion Effect” (Photo credit: Michael Khoury)

The adventures that fill the rest of the plot include Gala’s arduous training, helped by the Coach, Holmes’ partial reformation and Gala’s final triumph which is ruined by Leon’s egotism.

In the end, despite nearly making it both professionally and romantically, Leon and Gala realize that they live in different worlds and the ballet ends with Gala’s bittersweet reverie on what might have been.

Eifman tells the story with efficiency and an eye on entertainment.  His choreographic style is somewhere between the character-driven work of Leonid Massine and the superficial chic of Roland Petit.  His steps often verge on cartoonish mime, but he gets his points across with gleeful energy. 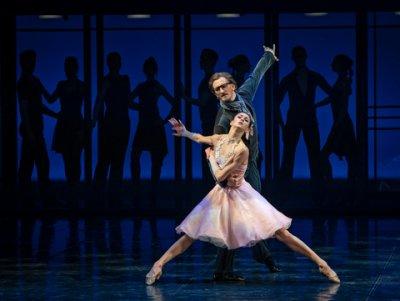 Lyubov Andreeva as Gala and Sergei Volobuev as Coach in a scene from Boris Eifman’s “The Pygmalion Effect” (Photo credit: Michael Khoury)

His chorus of street people galumphs about, their heads bobbing in synch to show their toughness, while the effete ballroom artists primp and glower narcissistically.  The maids fret, their hands vibrating nervously while Holmes all but beats his chest with macho pride.  Eifman is not the most sophisticated choreographer but he knows how to make his characters communicate and also knows how to move large groups with efficiency.

Olga Shaishmelashvili’s colorful and witty costumes added layers to Eifman’s precise characterizations from the woolly hats of the mob to the long red dresses of the maids to the glitzily revealing costumes of the ballroom dancers.

Also important was the lighting of Alexander Sivaev and Eifman which made the choreography, set and costumes glisten.

Eifman’s dancers are incredibly enthusiastic and clearly love doing his steps for an audience who respond in kind.