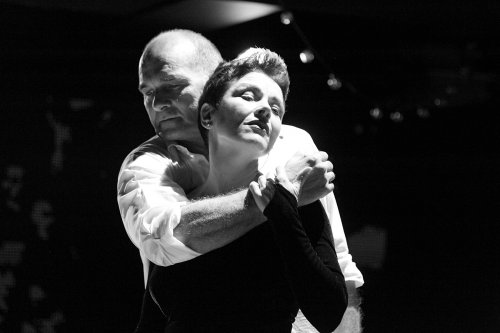 Pascal Rioult as Marcel Cerdan and Christine Andreas as Edith Piaf in a scene from “Street Singer: Celebrating the Life of Edith Piaf” (Photo credit: Paul B. Goode)

Pascal Rioult’s prettified song-and-dance tribute honoring the singer’s 100th birthday, Street Singer – Celebrating the Life of Edith Piaf had one terrific thing going for it: the splendid Christine Andreas, Broadway and cabaret star, as Piaf.  She has dabbled with Piaf songs in many of her recent shows, so it was good to hear her voluptuously rich voice in songs that ran the gamut from young, hopeful Piaf to world weary Piaf.

Mr. Rioult, a French native, has Piaf’s music in his bloodstream.  His Street Singer (also using RIOULT Dance NY) started and ended with the song most identified with her, “Non, Je Ne Regrette Rien” (Charles Dumont/Michel Vaucaire).  The first time, as Piaf relates her poverty-stricken, backstreet upbringing, the Rioult dancers, did sexually suggestive apache dances (costumed by Pilar Limosner whose other outfits economically suggested the period).  By the time the song is repeated at the very end, a worn-out Piaf can barely get out the words and these same dancers, in the same costumes, seem to be haunting her.

42West in the Out NYC Hotel is an odd venue for dance with its low ceilings, wide, shallow platform and a low runway jutting out into room.  The audience is seated at tables on various levels since it is a nightclub where people eat and drink while being entertained.  (This was a fundraising event for the troupe.) Mr. Rioult made the best of the space, spreading the action across the entire platform—except for the space occupied by the expert band led by Don Rebic—and down onto the runway, giving the action immediacy and intimacy.  The entire back of the stage was a video screen on which were portrayed period photos and portraits, all designed by Brian Beasley.  Jim French’s lighting skillfully varied the performing space with pools of light and dark.

Mr. Rioult, in addition to staging Street Singer, was a very involved narrator, shadowing Ms. Andreas.  He also portrayed a fist-flying Marcel Cerdan, the French boxing champion who was the love of Piaf’s life and for whom she wrote “L’Hymne à l’Amour” (with Marguerite Monnet) upon his tragic death in a plane crash in 1949.  In the dance to this touching song, the dancer representing Piaf was lifted repeatedly, her body stiff with grief, loosening up only when embraces lead to soft leaps as if accepting her loss. 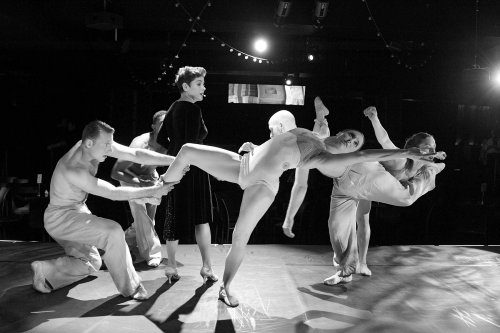 Christine Andreas and RIOULT Dance NY in a scene from “Street Singer: Celebrating the Life of Edith Piaf” (Photo credit: Paul B. Goode)

The true awfulness of Piaf’s early life was never realistically portrayed.  Mr. Rioult’s pleasant dances, meant to entertain, were still involving though prettily superficial.   The beautiful dancers of his troupe did a can-can and a hip twisting swing dance (both composed by Mr. Rebic), were nightclub performers (“My Heart Belongs to Daddy” by Cole Porter) and were the rough couple dancing to “La Vie en Rose” (Louis Louigy, Mack David, Marcel Louiguy & Piaf).  She was repeatedly embodied by a lovely dancer in a filmy blue dress first seen dancing to Ravel’s “Sonatine,” a sweet, youthful, spiritual figure.

Her early ill health, including a bout of blindness was told via “Mon Dieu” (Charles Dumont/Michel Vaucaire), a strangely lyrical dance in which the Piaf dancer was softly lifted.  The scare ended happily, sight restored.  In “Mon Manège à Moi” (Norbert Glanzberg) she forced to sing for her supper by her father.  The story of her heroism in World War II was represented by a very funny mime accompanied by “La Valse de l’Amour” (Monnot).  She always left her German prison camp shows with more men than she showed up with, eventually saving nearly two hundred prisoners.  Her drug addiction, here portrayed as a result of the loss of Cerdan, became a dance to “Padam Padam” (Norbert Glanzberg/Henri Contet) in which Ms. Andreas was ominously surrounded by five dancers.

The RIOULT dancers, a handsome lot, performed with as much abandon as they could in the less than ideal space.  They also spoke their lines, written by Mr. Rioult and Drew Scott Harris with some panache.  Rioult’s choreography combining the lines and partnering of ballet with the body plastique of his modern dance masters has an individual look his dancers have absorbed completely.