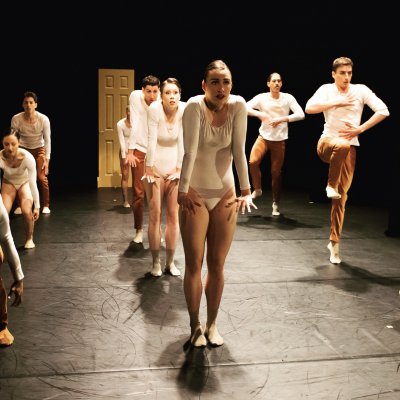 After sitting through six ballets danced by the Steps Repertory Ensemble, I had to wonder if anyone in this company can cracks a smile or dance for the joy of it or has the slightest sense of hope?  I have to say that the answer appears to be no.  The closest the evening came to a sense of humor was the final ballet, a heavy-handed caveman version of Ravel’s “Bolero,” “3114 BCE,” choreographed by the troupe’s artistic director, Bradley Shelver, in which the performers seemed to be doing a grabby “me Tarzan, you Jane” shtick to the oft-choreographed score.

Each work was a study in angst, torpor and primitive emotions starting with “Le Monde est Fini, Pas de Panique,” a world premiere by Mr. Shelver to music ranging from Gregorio Allegri to Mozart.   Two dancers carried signs which pronounced “Sinners repent, the end is near,” and “The end of the world is nigh and it will be tweeted,” which seemed to promise a humorous work.  Once they were joined by the rest of the company, the mood became formal, yet depressing.  The dancers formed three lines which weaved back and forth through each other.   As the score changed from religious choral music to rhythmic clapping the lines broke up into swirls of movement that changed again as one then another dancer flopped to the floor as if overcome.   Mr. Shelver filled the stage with movement, but never quite got beyond the feeling of entropy that enveloped the work, which ended with an appropriate sign reading “The End.”

“He and I, Us and Them,” an excerpt from a longer work by Mr. Shelver, to Chopin and Beethoven put two couples on the stage, Criss Rodriguez and Dan Pahl, and Gabriela Soto and Malik Kitchen.  Although they occupied the same space, they were in two different compositions.   The first couple ruefully leaned on each other uneasily to the Chopin score, quietly watched by the other two.  They became more agitated but the soft interdependency returned.  The second couple also began in quiet intensity that soon morphed into twisty partnering punctuated by separations.  These two were more on the edge than the first couple, although the source of their angst was never made clear. 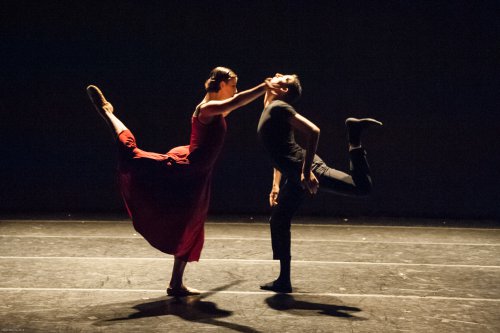 Katherine Sprudzs  and Joseph Wamp in the “She and Him” section of Shelver’s “He and I, Us and Them” (Photo credit: Nan Melville)

“Recur,” by Jae Man Joo was actually three excerpts from a longer work first done on the Complexions Contemporary Ballet and the lushly sensual, oozing movement scheme certainly reflected that troupe’s over-the-top extravagant movement style.  The score taken from three composers—Nils Frahm, Max Richter and Valentine Silverstrov—had an ominous, relentless quality reflected first in the full-company opening scene to insistently repetitive piano music.  A soloist moved against a group of dancers who ran on and off, never quite taking her in.  The trio and duet that followed defined a manage à trois (two guys and a gal) and then a homoerotic pair (Aurélien Peillex and Malik Kitchen). Although handsomely constructed, the choreography seemed to exist for effect rather than illumination.

“SansScript,” a world premiere by Mike Esperanza, used the sounds of twittering birds as a backdrop for a darkly playful quartet—Carley Marholin, Gabriela Soto, Allie Mae Gee and Katherine Sprudzs—interrupted by the entrance of two men—Criss Rodriguez and Dan Pahl—who turned the women’s world into a mini-drama fraught with diffuse sexual overtones of jealousy, anger and sensuality.

“Apex,” by Francesca Harper to music by Rolf Elmer, was first performed by the Alvin Ailey American Dance Theater.  I can’t imagine the Ailey dancers giving this lugubrious work a better performance.  Weighted down by pretentious program notes which “Apex” never quite lived up to, the ballet put the three couples, dressed in two-piece black outfits (uncredited) through their paces.  The emotions weren’t entirely clear but all six covered space, lifted their legs high, and looked duly anxious.

The Steps Repertory Ensemble is full of beautiful dancers, refreshingly, of all physical types.  Yet, they move like a company all on the same beam, which is to Mr. Shelver’s credit.  But, for goodness sake, lighten up, guys.  You’re young, beautiful and talented, why not enjoy it?

Steps Rep has several local appearances coming up, so check their website for information.  They are definitely worth following.

Running time:  one hour and 45 minutes including one intermission

A beautiful bunch of dancers in a dreary program.