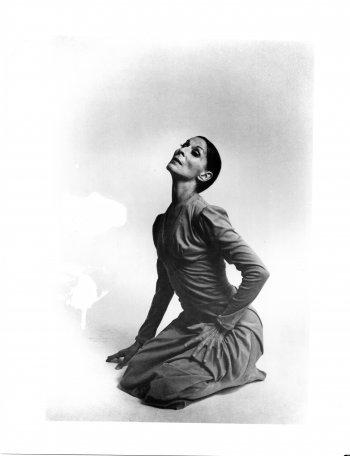 The Deborah Zall Project’s In the Company of Women was a treasure trove of old-fashioned modern dance fashioned by several modern dance pioneers.  “Old fashioned” should not be taken as anything but a compliment to Ms. Zall, her dancers and the three other choreographers represented in her generous program at the Martha Graham Studio Theater in Westbeth.

Just when most dancers have bronzed the toe shoes and rolled up the Marley flooring, Graham acolyte Deborah Zall has had new life breathed into her career by young dancers who are eager to mount and dance her perform dramas and the works of other historic modern dancers.  Zall, and all the choreographers on this program, were either in the Graham troupe (mostly in the thirties and forties) or studied extensively with her. Their approach to dance falls squarely in the shadow of Martha Graham, even the work of those who moved on.

The works of Anna Sokolow, Sophie Maslow and Jane Dudley—two each—shared the program with Zall’s five.

All but one of Zall’s works were solos and all were based on famous literary figures:  “George Sand” (ruminating on her lost love, Chopin), “Mary Tyrone” (from Long Day’s Journey Into Night fighting her addiction while remembering her childhood), “Sonnet” (to an Edna St. Vincent Millay sonnet about obsessing over a lost love), “Amanda” (the mother in A Glass Menagerie sadly musing over her ball gown) and “Shadow of Her Sister” (two sisters from The House of Bernarda Alba battle to the death with dark Catholic imagery overlaying the internecine war). 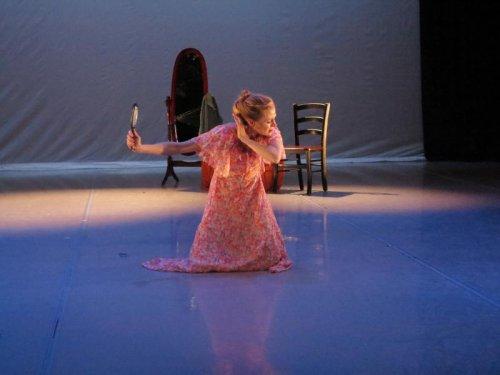 Zall’s works were impeccably and movingly danced by Sandra Kaufmann, Nya Bowman, Carrie Ellmore-Tallitsch, Erica Dankmeyer, and Lauren Newman and Caterina Rago (as the Bernarda Alba sisters).  With just hints of a set (a bench, a mirror, a table, a dress, a hypodermic needle), perfectly fashioned period costumes, and apt musical choices, Zall and the dancers managed to make each work a portrait of women experiencing intense emotional upheavals.  Zall skillfully used the telling gesture, the weighty Graham movements and her thorough knowledge of her source material to bring these vignettes to life.

Jane Dudley’s “Time is Money” from 1932 opened the program.  Sol Funaroff’s bitter, anti-capitalist/anti-greed poem—with the much-repeated theme, “tick-tock”—was the aural setting for this edgy solo performed by Erika Dankmeyer.  Tension was indicated by off-balance lunges, flexed feet and tightly held arms.  Dudley’s other work, “Cante Flamenco” (1944), to traditional Spanish vocal and guitar music, was her reaction to the Spanish Civil War.  She combined the curlicue hands and twisty postures of flamenco dance with the floorwork and contractions of Graham technique.

Sophie Maslow’s ‘Dusty Old Dust’ from “Dustbowl Ballads” (1941) used a Woody Guthrie folksong to accompany Jennifer Conley’s skipping farm girl character, dressed in a plain, but colorful dress.  Although a tad naïve, Maslow’s heart was in the right place.  She also used folksy, ethnic material in the duet, ‘A Point of Doctrine’ from “The Village I Knew” (1950), her homage to shtetl life.  Carrie Ellmore-Tallitsch stood wagging her finger at the seated Kenneth Topping (a former Martha Graham principal dancer) who stoically withstood her constant barrage of negativity, that is, until he fell off the bench, leaving her surprised. 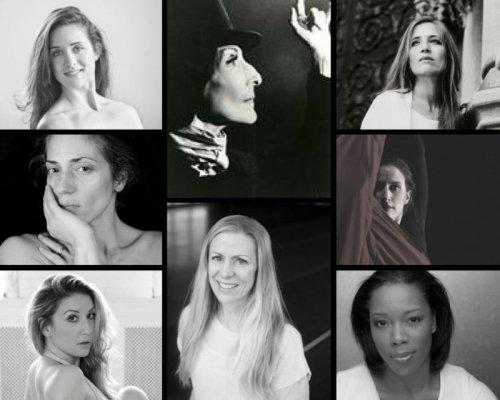 Anna Sokolow, perhaps the most famous of the four choreographers, contributed two dark works.  From “Lyric Suite” (1990) to the Alban Berg score, a young woman, Jennifer Conley, is caught in a spotlight, tightly twisting to the angular, atonal music.  She carefully stepped about leading to a tense run in a circle, stopping to carefully swing her legs, only to run in circles again.  Kneels on the floor were followed, again, by the circular running pattern which was performed in silence, after the music faded.

The other Sokolow work was “Kaddish” (1945), her testament to the victims of the Holocaust, performed to Ravel.  Erica Dankmeyer, all in black, looked downward and slowly raised her arms in a supplicating gesture only to bring them down quickly and decisively.  She tilted side to side as her hands opened and closed.  She appeared to be keening in grief, pounding her chest with her fists.   A fleeting upward glance at the end was the only vaguely optimistic moment.

It was an honor to be in the presence of these resuscitated works and see what made these choreographers so famous to modern dance lovers.  Just as there are “well-made” plays, there are “well-made” dances such as these, anomalies in today’s post modern era where the concept reigns supreme and gimmicks and quirks are the gist of most ballets.