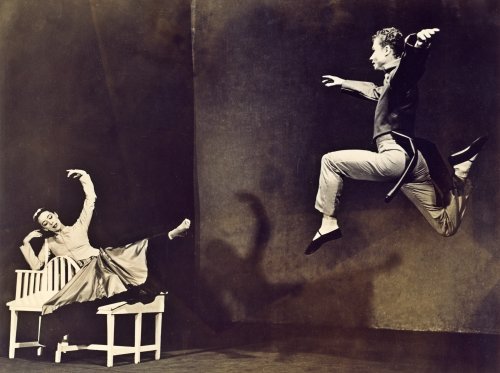 Martha Graham and Merce Cunningham in a scene from Graham’s “Letter to the World” (Photo credit: Barbara Morgan)

Their paths diverged in cultural history-making ways in the mid-forties.  Cunningham evolved a philosophy that led to the creation of scores of dances that combined choreography, scenic and costume design and music, elements that existed totally independent of each other while Graham continued to produce highly regarded works that explored human nature through contemplation of American themes (Appalachian Spring) and ancient Greek mythology (most notably her evening-length Clytemnestra) that all were enhanced by her artistic and musical comrades.

Both aligned themselves with great artists and composers: Graham with Isamu Noguchi, Samuel Barber, Aaron Copland and Carlos Surinach and Cunningham with John Cage (his mentor), Robert Rauschenberg, Andy Warhol and Jasper Johns.

Not only did their creative output differ, but the techniques required to perform them did too.  That difference was the subject of CunningGraham Technique Comparison, part of the Graham Studio Series at the Westbeth home of the Martha Graham Company.  (Ironically, this very same space had been the home of the Merce Cunningham Company and school for more than four decades!) 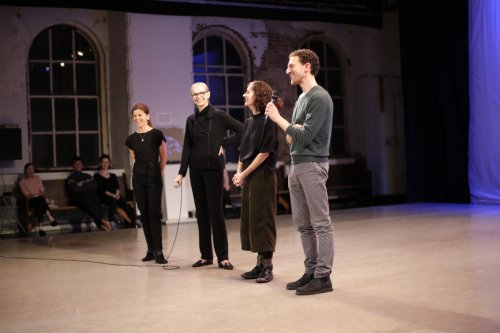 As an informative prelude to the lecture-demonstration, two fascinating short films were projected on the back wall showing the actual Martha Graham and Merce Cunningham doing their thing, mostly in their prime.  Elisabeth Ajtay provided the Graham material displaying that dance titan’s emotional depth and Daniel Madoff the Cunningham showing his elfish dexterity.

Hosted by the Graham Company’s elegant director Janet Eilber, the program began with some historical comments after which two groups of dancers, one representing the Graham technique from Graham 2 and the other the Cunningham technique from the Merce Cunningham Trust entered the large studio/theater.  They performed parallel exercise routines, the Graham side guided by Virginie Mécène, Graham 2’s director and former Graham star, and the Cunningham contingent guided by two former Cunningham members Jennifer Goggans and the aforementioned filmmaker Madoff.

Both began with warming up the torso which was approached differently in each technique.  The Graham dancers sat on the floor, their legs spread or together as they twisted their bodies over the extended legs while the Cunningham dancers stood straight-legged, slowly and calmly bending their upper bodies.

Graham’s movement vocabulary extends outward from the core, especially her famous contraction/release in which the torso is percussively pulled back forcing the rest of the body to move in response. 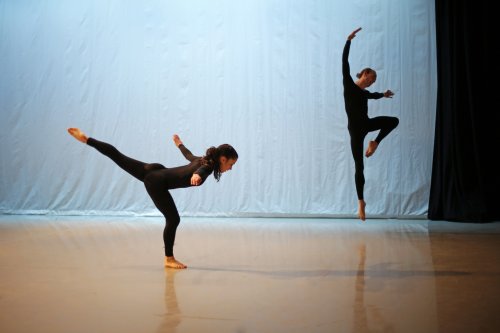 Cunningham admired the thoroughness of basic ballet technique for the legs while simultaneously working on freeing the upper body and arms to move effortlessly in “un-ballet,” modern ways, the better to free his imagination to create movement phrases.

As the exercises gained more complexity and momentum and started moving across the studio, the distinctions became clearer:  the Graham dancers exuded passion and warmth while the Cunningham group displayed a cool control of their bodies making elegant shapes in space.

The different philosophical approaches were made crystal clear in the excerpts of ballets performed by these young, pert dance artists.

Mariah Anton and Ryan Pliss, who were rehearsed in silence (as were every single dancer who performed Cunningham’s often chance-influenced steps), were hearing Michael Pugliese’s thrumming score for the first time as they entered the performing space to sail through Cunningham’s August Pace (Duet #4). They seemed to be a couple who barely touched, hitting ballet steps that were tilted and twisted, arms reaching up and out, moving in parallel patterns, sometimes meeting for a bit of cool partnering.  Anton smiled, belying the clear—if not intended—disconnect between her and Pliss.  They danced with clarity and precision. 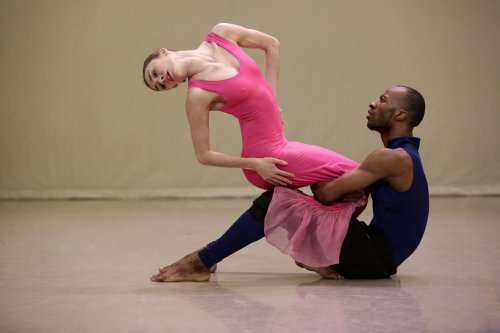 Diametrically opposed to Duet #4 was the excerpt from Graham’s take on the Garden of Eden, Embattled Garden danced to—not along with—Carlos Surinach’s lush score performed by Androniki Vasili (in a bright pink, stretchy dress) and Riccardo Noto (in matador-influenced black).  These two were experimenting in the newness of each other’s bodies, stretching out beside and wrapping themselves about each other.

A Q&A put the Cunningham reps a bit on the defensive as they tried to explain how Merce Cunningham just made steps—using various methods, including consulting the I Ching—that were reproduced by his technically superb dancers with no pretense to emotion, meaning, musicality or even abstraction while Graham lived and created from the gut using imagery, musicality, costumes, etc., to concentrate into ballets that told stories or expressed relationships.

Needless to say, both methodologies have their unmovable acolytes, although both approaches have produced many gorgeous dancers and superb ballets.