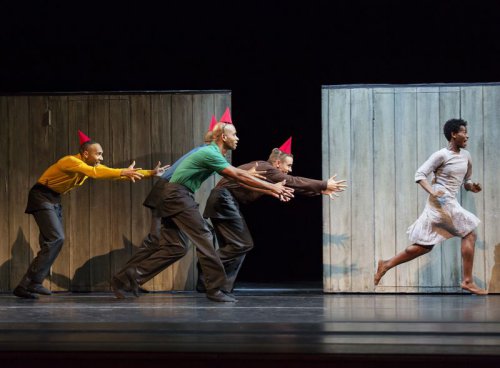 A program of three new works has completely restored my faith in the Alvin Ailey American Dance Theater.  Over the past few years I began to feel that the troupe was emphasizing glitzy technique over content.  No doubt, the technique of each and every company member is terrific, but they were, in my eyes, playing far too much to their audience.

Three fine new works by eminent dancemakers brought out the souls—if I may use that word—of these driven young dancers.  Technique was certainly on display, but totally in service to the musical and dramatic demands of the works.  Robert Battle, the new Artistic Director, is clearly putting his influence and taste on display.

Okay.  I’ll get it over with:  I apologize to the AAADT for my evil thoughts!

“Walking Mad,” choreographed and designed by the Swede, Johan Inger could have been overwhelmed by Inger’s set, a stage-wide wooden wall with several doors.  The wall was moved upstage and downstage, bent in the middle and flattened out to become a mini-stage. This was more than a mere eye-catching gimmick; it became a virtual character, thwarting relationships, harboring loners, menacing and wooing in equal measure.

Inger’s musical choices were, at first glance, an odd combination:  the boisterous, rhythmically driven “Bolero” by Ravel and Arvo Pärt’s distillation of grief, “Fűr Alina,” but they work.

The three women in the ballet—Sarah Daley, Jaqueline Green and Ghrai DeVore—were in simple, sleeveless dress and the men in white shirts and black pants which had strange apron-like flaps on them. (Costumes by the choreographer.)  The men also wore hats and trench coats which made them look like something out of a forties detective film, particularly when they strode about, coattails flapping.

The women were not treated well.  After participating in angular, push and pull duets, the men eventually abandoned the women.  A final duet to the Pärt music was heartbreaking.  Actually it was a trio for a man, a woman and a trench coat.  The sadness and angst was palpable.  When left alone holding the coat, Ms. Daley’s contorted face and collapsing body said it all.  This was a ballet about a community that communicated in anguished movement, consummating in that emotionally draining duet.

Erik Berglund’s excellent lighting turned the stage into a seething corner of a very anxious town. 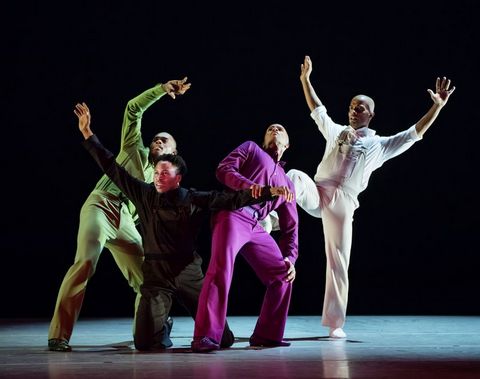 “r-Evolution, Dream.” was a jaunty new ballet by Ailey member Hope Boykin to music by Ali Jackson plus narration spoken by Leslie Odom, Jr. which included a Shakespeare sonnet, “A Negro’s Complaint” by William Cowper, “If I Can Help Somebody as I Pass Along” by Alma Irene Bazel, etc.

This delightful romp pitted four groups of dancers against each other, occasionally joining forces, particularly in a fleet finale in which the lines interwove and “interbred.”   The dancers—including members of Ailey II—were defined by the color of their chic costumes (black, white, purple and green, designed by Ms. Boykin) all led by Ailey veteran, Matthew Rushing whose Pied-Piper performance gave a center of gravity to what might have been a pleasantly disorganized entertainment.  Standing out was Megan Jakel whose whirling, undulating solo evoked spontaneous applause.

In Mauro Bigonzetti’s “Deep,” the women finally got even for all the ballets in which unsubtle misogyny prevailed, where they have been flipped, tossed, stretched, left emotionally bereft or otherwise mistreated.  Towards the end of this kaleidoscopic view of social interactions, the cast, dressed in Mr. Bigonzetti’s chic variations on black layers, the women fling themselves at the men, scissoring them with their obviously strong thighs, causing the men to slowly arch to the ground at which point the women triumphantly step onto the men’s abdomens and then sauntered off, leaving the formerly macho men to lick their wounds. 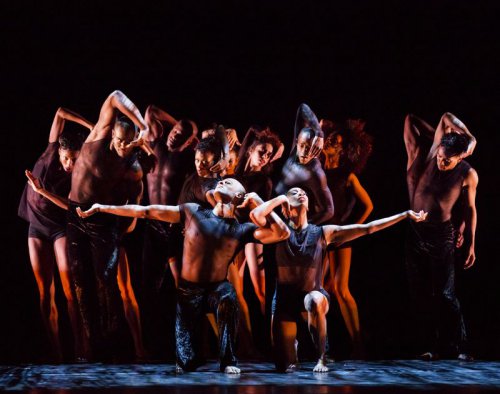 “Deep” is set to music by Ibeyi, a series of pop art songs sung in close harmony that range from mournful to joyful.  It began with an image also used to close the work:  three women walking forward, away from the ensemble, the dancer at the center raising her arms in a gesture both beseeching and vaguely religious.

“Deep,” lit with dramatic chiaroscuro by Carlo Cerri, became a series of confrontations between men and women and between soloists and the ensemble.  This work confirms Bigonzetti’s as a master of revealing emotional states and relationships through movement.

It was great to see this extremely popular dance company dancing with impeccable style in three new works which, hopefully, will stay in the repertory for a long time.

Running time; one hours and 45 minutes with two intermissions