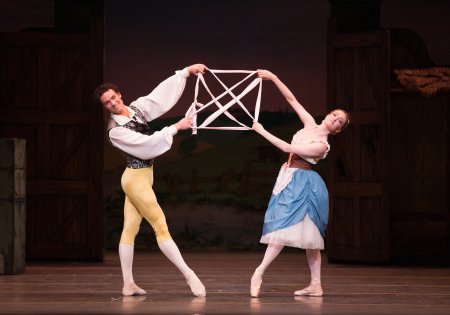 Could there be a more charming or heartwarming ballet than Frederick Ashton’s 1960 La Fille mal gardée?  American Ballet Theatre’s staging by Malin Thoors of this masterpiece is stylish and entertaining, providing ample opportunities for new audiences to savor its cleverness and mastery of form and for its fans to bask again in its ingenious innocence.

Leading this bucolic tale of amor interruptus were Gillian Murphy (her usual strong technique subsumed in girlish sweetness) as the farm girl, Lise, the “badly guarded girl” of the title, and Cory Stearns (at his lyrical best) as Colas, her young farmer swain.  In the drag role of Lise’s mother, Widow Simone, was Marcelo Gomes, the still vibrant classicist perhaps just having a bit of fun in a character role, or keeping an eye on the future—distant future!—when character roles will be the natural progression for this great artist.

It’s a pastoral period piece set in a delightfully fantastic England where farmers are spic and span and everyone has time to dance.  Widow Simone wants Lise to marry Alain (Arron Scott, just right in his gentle nuttiness), the simpleton son of a prosperous vineyard owner, Thomas (Thomas Forster, blustery and autocratic in equal measure).  Lise, however, is in love with handsome Colas and takes every opportunity to sneak off with him which, fortunately, results in three divine pas de deux in which every step is a visualization of their passion for each other.

There are storms, harvest festivals, extraordinary maypole dances.  Ashton uses ribbons throughout the ballet to signify the connection between Lise and Colas. In a mindboggling bit of virtuosity Ms. Murphy is supported by her female friends by holding onto spoke-like ribbons as she is slowly promenaded on point.  But it is the final duet that is its most exquisite moment. After Lise and Colas entwine in smooth lifts and partnered turns, they suddenly separate with bursts of tricky steps that exude youthful exuberance only to reunite with Lise sitting upon his knee.

Ashton’s detailed vision, from the ecstatic vibrations of Lise’s feet when lifted by Colas to his use of props (spinning wheels, horse-drawn carts, bales of hay) to Alain’s strange attachment to his umbrella (which literally lifts him into the air during a storm sequence) gives Fille a glowing life on stage, helped by the beautiful dancing from the corps all the way up through the leads whose acting was equal to their dancing.

Ashton’s Fille is a rethinking, an anglicization of the eighteenth century French classic choreographed by Jean Dauberval, reportedly the first ballet about “real” people as opposed to royalty or mythological characters.  The original score by Ferdinand Hérold was prettily arranged by longtime Ashton collaborator, John Lanchbery who added leitmotif themes from other composers of that period to give the score more color. The American Ballet Theatre orchestra was joyfully conducted by Ormsby Wilkins.

In his efforts, Ashton was helped beyond measure by the costumes and sets of Osbert Lancaster which create a warm world of lovely dancing yokels, a world that certainly never existed, but one that looks superb on the large Metropolitan Opera stage, beginning with a witty front curtain with its images of silly antique statuary and distant houses on rolling hills.

American Ballet Theatre has become an American repository of Ashton’s works, including his The Dream and Monotones.  Perhaps they’ll soon do an Ashton program and give Mr. Ratmansky a little break.