The City Center Encores production of Jonathan Larson’s tick, tick…BOOM! (directed by Oliver Butler) is the best show I’ve seen anywhere in a good while. And Lin-Manuel Miranda, in the leading role–as the Jonathan Larson surrogate–was a revelation. I would never have thought of casting him in the role, but he was breathtakingly right for the part. (Casting directors Carrie Gardner and Stephen Kopel, “Ya done good!”) I hope producers are wise enough to see the strengths of this limited-engagement production. Some wise theatrical producers–whether commercial producers or a not-for-profit organization (like New York Theatre Workshop or the Public Theater)–ought to find a way to give this production a real run some place. So many shows I see around town feel so synthetic, superficial I don’t even bother commenting upon them. We don’t need more slapdash jukebox musicals filling theaters. 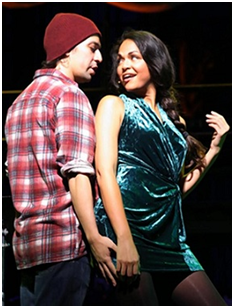 But tick tick… BOOM! –written by Jonathan Larson (with a posthumous assist from script consultant David Auburn) is as realistic and moving a portrait of a struggling artist as you can ever hope to see. It has emotional impact. And I’m very glad that Larson’s parents and sister (who were seated immediately in front of me), and his good friend Kevin McGrath got to see the audience’s whole-hearted, thunderous response to this work.

The audience packing City Center–whether applauding or laughing or cheering–certainly showed its enthusiasm throughout. The opening scene of tick, tick…BOOM! is very powerfully and economically written. I admire Larson’s writing. Hearing those ticks (representing the relentless passing of time), and anticipating the coming boom (of an impending disaster that is somehow sensed without being fully understood) … well, that came from a deep place. And it was prescient writing. Larson was about 30 when he wrote this semi-autobiographical show, portraying the anxieties of a creative artist who has not found much commercial success, and fears time is limited. (Larson himself would die suddenly, when he was just 35, of an aneurysm. This show is hauntingly informed by an awareness that we do not know how much time we may have, and we must make the most of what time we do have. It’s as if Jonathan Larson sensed, on some subconscious level, his own time was limited.) I’ve always liked this show. I’d forgotten how richly varied the score is, and how much humor, not just drama, it has. 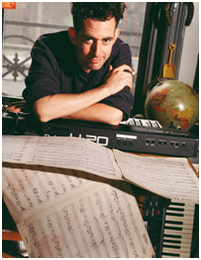 As a composer, lyricist, and book-writer, Larson had something very special, and this piece deserves more of a life. I liked very much the original 2001 Off-Broadway production (spearheaded by producers Victoria Leacock Hoffman and Robyn Goodman); but this version hit me even harder. The choice of Miranda to play the protagonist, “Jon”–with just the right mix of pathos, strength, charm, and wit–was really inspired casting. (I did not know he had it in him.) I liked Raul Esparza so much in the original Off-Broadway production (and I was also lucky enough to attend the cast-album recording session for that production), I never imagined I would like someone else even more. But I relished Miranda’s very human–while still very driven–interpretation of the role; he was more vulnerable than the innately self-assured Esparza was–more angsty and insecure–and that served this script and score better.

Leslie Odom Jr. was perfect as the prosperous best friend–and in assorted other roles, too, from Jon’s agent to Jon’s father (in his manner of speech, Odom evoked well Jonathan Larson’s real-life father; and I appreciated that homage). 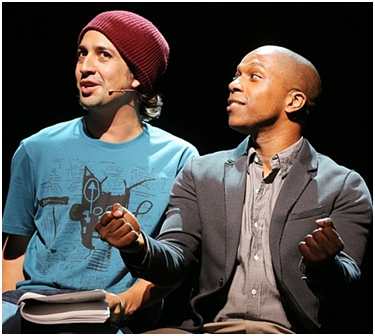 Karen Olivo–as Jon’s ambivalent girlfriend, “Susan”–sang strongly and went over big. Playing the girlfriend, she was, at times, harder and tougher than I personally think is ideal. She hasn’t quite found the characterization yet. She was completely on target in scenes where she was talking with Jon about the relationship not working out, about her wanting to leave him (and leave New York). She wasn’t as convincing in scenes where we’re supposed to feel the couple’s passion. The show depicts a relationship that is coming to an end, but both parts of the ambivalence Susan feels–the attraction to Jon and the desire to leave–must be given equal weight. I wished she could have showed me, more convincingly, the part of her that was in love with Jon; she was totally convincing in the scenes in which she made clear she wanted to leave him, and leave the city. (She scored very well playing other characters, as needed, I might add.)

There also were moments when the three actors, singing together, didn’t blend as well as they should. But the Encores productions are staged with minimal rehearsal time. I can overlook such relatively minor flaws because the production has, on balance, such impressive strengths. And with proper rehearsal time, actors can–and will–offer more fully realized performances. Knowing that these Encores productions are put together very quickly, I’m not worried too much about easy-to-fix problems (likes nuances of characterizations, or achieving perfect blends on vocal harmonies). The show, as a whole worked very well. And it generated quite a buzz in its brief run last week. Some credit must be given to an effective publicist (Helene Davis). But the powerful production itself was reaching people. 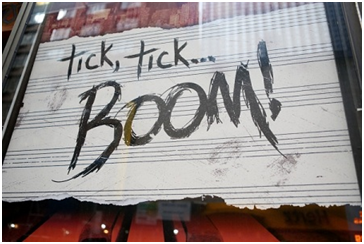 The original production of tick tick BOOM!, back in 2001, felt a bit like it was in the shadow of Rent (which was then still a very potent phenomenon, doing solid business on Broadway). That situation no longer exists. Rent is not playing in New York. And this show stands on its own. Tick tick… BOOM! feels as timely as ever; it includes some superb music; and you have in Miranda a perfect star. Odom and Olivo bring additional assets. And the tight, potent band (music direction by Chris Fenwick, with Matt Gallagher as pianist/conductor, and arrangements by Stephen Oremus) made the music jump. Some producer ought to grab this show.

I felt something similar when I saw Newsies open out of town, a couple of years ago–that producers needed to give the production I saw an open-ended theatrical run in New York. (And they did!) I felt that way, too, when Honeymoon in Vegas premiered in New Jersey–that it deserves to be given a proper shot in New York. (And it will get that, in the Fall.) This is only the third time in the last three years I’ve seen a show I strongly feel deserves greater exposure, deserves a proper theatrical run in New York. City Center Encores has provided a great service by reviving–if just for a week–this unique musical. I hope some producers takes a chance on tick, tick… BOOM!