“I’m not a real dancer but in this play, I celebrate my health.” Bina Sharif emotionally said to the audience following the curtain call of her self-written play, Dream Within a Dream’s final performance on December 30, 2018. Previously, she had executed several entrancing exotic solo dance sequences during the presentation.

“Last year during the holidays I didn’t know if I would live, let alone do another play.” Ms. Sharif explained about a fall she took in October 2017. This incident led to months of hospital stays and physical therapy. It also prevented her annual December residency at the Theater for the New City where since the 1980’s she’s written, directed and acted in numerous stage works.

“Spoiler alert! The author wants you know that the entire play is a dream!” wryly announces the house manger before the show starts.  This descriptive proclamation is indeed apt. Dream Within a Dream is 75-minutes of surrealistic vignettes laced with Sartre and Cocteau quotes, Pirandellian flourishes and Beckettian motifs including two derbies à la Waiting for Godot. “The audience didn’t come tonight.” “It was raining. They’ll come tomorrow” is a representative exchange between the two central figures about the play with-in-a play.

In darkness, the cast of four roam about with flashlights during the opening. Two members, a man and a woman later hobble on canes wearing black hats and take seats at the swanky East Village café, La Belle Époque. The haughty Algerian-born waiter is dismayed at their arrival as they are poor artists who will only order coffee and leave no tip. An actress passes by and is encouraged by the man to dance for him. He is an important drama critic and promises to help her career. These events veer off into a cascade of reflective digressions that reach a well-realized circular conclusion.

Devotees of Sharif will savor her familiar socially consciousness scenario with its theme of poverty-stricken creative-types clashing against rampant oppressive capitalism in contemporary New York City. That’s all rendered by airy, poetic and often humorous dialogue, sharp observations and abundant comedy with depth. Others, could be worn out by the freeform and arguably meandering structure. The play does unquestionably provide a grand showcase for the mature yet enduringly girlish Sharif’s appealing idiosyncratic  talents.

Her earthy comic and dramatic persona recalls the monumental life force of Melina Mercouri combined with her own distinctive native Pakistani speech patterns. The combination of her arresting dancing and wistful vocal delivery of her idealistic speeches all yield to a hauntingly tender performance as “B.”.

Sharif’s long-time artistic cohort Kevin Mitchell Martin is in great form as her verbal sparring partner and as the hilariously cartoonish critic who offers barbed commentary on the proceedings. Tall, imposing and with his melodious voice that perfectly scores each punchline, Mr. Martin breathtakingly delivers a soaring monologue expressing scorn for Donald Trump, addiction to MSNBC and an adoration of Rachel Maddow. 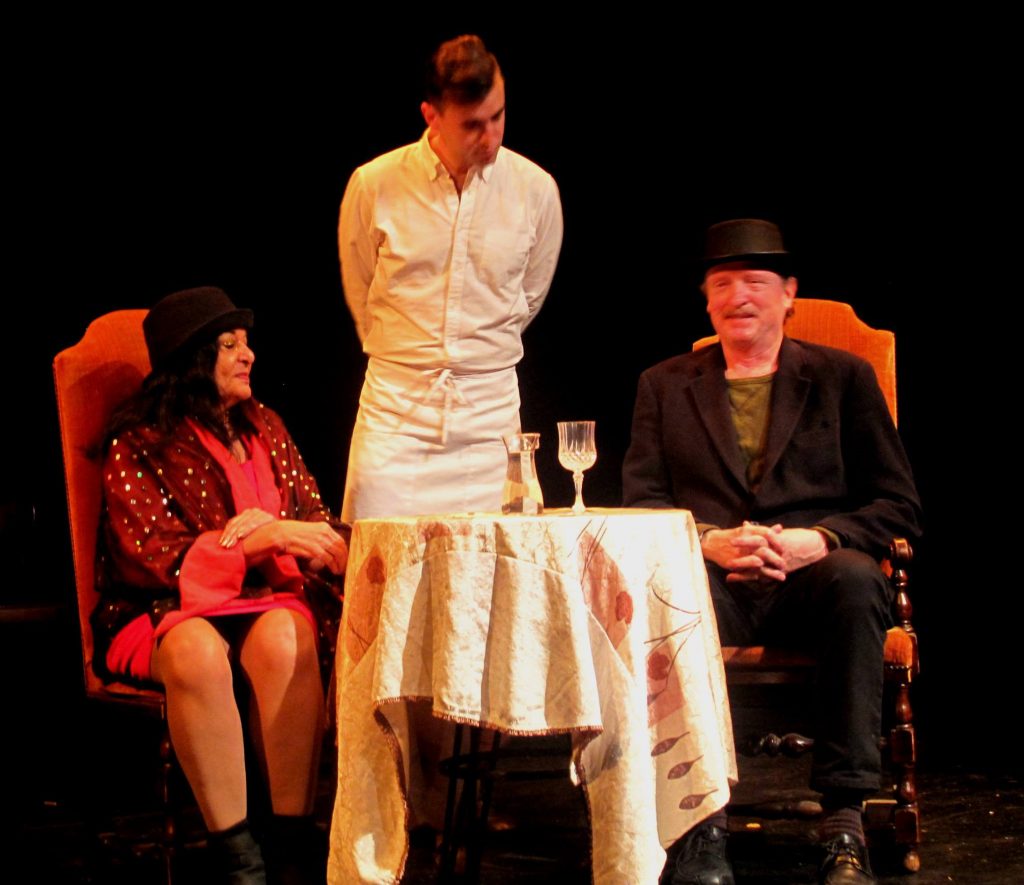 As the caustically whimsical waiter, the youthful, athletic and animated Manuel Salazar is delightfully forceful with his playful French accent. Mr. Salazar is equally as commanding delivering a romantic poem in Spanish and conversing in American-accented English as other incidental characters. The captivating Selear Duke makes a marvelous impression as the striving actress who simulates Salome with her riveting dancing and affective  gentleness as a another would be performer.

On the black accented stage that’s sparely set with minimal vintage furnishings, Sharif’s staging is a straightforward affair of moving from scene to scene with a modicum of aesthetic effect. Alexander Bartenieff’s lighting design has artful solidity with its vibrant brightness and thrusting dimness.

The knowledge of Bina Sharif’s past malady endows Dream Within a Dream with an honorific dimension, magnifying its thoughtfully entertaining attributes. “Eating and making theater, what else is there in life?”

Theater for the New City, 155 1st Avenue, in Manhattan