It was well deserved, the reputation coming ahead of her; that she could be a gigantic pain in the ass… (John Cunningham)

I always liked her with reservation. She was a selfish performer because she always tried to steal the spotlight. (Russell Nype)

She was absolutely magnificent. A truly great performance. If only she could play it in London. She really is an astonishingly fine actress. (Noël Coward) 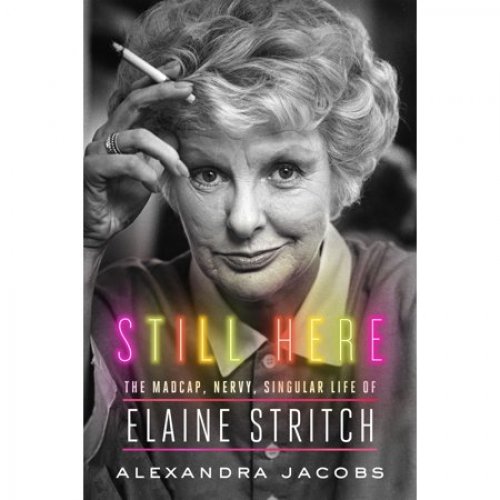 These are among many choice quotes contained in Still Here: The Madcap, Nervy, Singular Life of Elaine Stritch, from those who knew the legendary performer. In 300-methodical pages, author Alexandra Jacobs deftly chronicles the tempestuous life and career of that incomparable talent.

“When Elaine was born, the chandeliers shook, and they never stopped” said her older sister. “I have to tell you, when she took her last breath, I was shocked. I was completely flabbergasted” said her neighbor and friend who watched her die.

Ms. Jacobs’ comprehensive research, copious interviews and zesty prose depicts the irreverent and divisive Elaine Stritch in all her complex glory, from her privileged upbringing to her death at the age of 89, in 2014, in her native Michigan. Details of Stritch’s renowned and ever-present alcoholism abound.

Believing that the era of Stritch’s amazing renaissance which began in 2001, with her Tony award-winning solo show Elaine Stritch: At Liberty, Emmys for televison’s 30 Rock and a vaunted cabaret act at the Carlyle, have been well-covered in documentaries, Jacobs shrewdly and comprehensively concentrates on what happened before. The mythology memorialized in At Liberty is dissected along the way.

In the 30-page first chapter, we get an insightful take on Stritch’s childhood. Her gregarious father prospered as an executive at B.F. Goodrich, and it was from him that she got her first drink. Her imperious mother ruled the household and her three daughters, Stritch being the youngest. At age 18, in 1943, with parental consent she was off to Manhattan to attend a Catholic finishing school and to study acting at the New School’s Dramatic Workshop. Jacobs writes a beautiful sequence about its founder Erwin Piscator, the intensity of the curriculum and roles Stritch played there. Of course, fellow classmate Marlon Brando is featured here.

Besides developing her performing skills, Stritch had the cunning realization that more than talent was necessary to succeed in the theater. She ingratiated herself with the foremost influential newspaper columnists. Walter Winchell, Dorothy Kilgallen, Earl Wilson and Leonard Lyons, all featured items about her, making her seem bigger than she actually was. In later years, a New York Times profile of her by Lee Israel was pivotal. In the 1970’s and onward, her close friend Liz Smith heralded Stritch in her nationally syndicated gossip column. Keen observations gleaned from interviews with Ms. Smith, Harold Prince, Stephen Sondheim and many others are ubiquitous.

By the late 1940’s, Stritch was appearing regularly on Broadway. One of Jacobs’ great strengths is her ability to craft descriptive encapsulations of the backstories of discussed productions endowing the book with a scholarly quality. The fiasco of The Time of The Barracudas is rescued from oblivion and the making of the career-rejuvenating Company, and Stritch’s influence on it are detailed in full. The friendship with Noël Coward gets requisite attention.

Despite triumphing as Martha in Broadway matinees of Who’s Afraid of Virginia Woolf?, the 1960’s were rocky with a lot of summer stock and touring. There was her fluke employment as a bartender at Elaine’s restaurant for a few months until owner Elaine Kaufman fired her. The women’s residences, apartments, friends’ couches, houses, hotels and condos across Michigan, New York and England, that Stritch nomadically lived in are noted by Jacobs’ industriousness.

Several dachshunds provided great comfort to Stritch throughout her life. There’s a hilarious bit about her successfully smuggling a tranquilized one in a specially designed handbag onto a plane and then into England. This was in violation of the British 6-month quarantine of animals brought into the country. She was doing Sail Away in London, and staying at the Savoy which had a no dogs policy that she also violated.

Her romantic life with unavailable men that ended with her semi-chaste marriage to American actor John Bay is analyzed. Speculation of their sexualities is entertained and Stritch’s possible gay tendencies is discounted. Other behavioral quirks are addressed including her cheapness, kleptomania, envy of Angela Lansbury’s dazzling career, frequent feuds with castmates and her drinking.

“I gave her to a certain degree a format that made her a legend, but she could not be grateful,” said her At Liberty collaborator John Lahr, who reached an out of court settlement with her over unpaid royalties to him.

The book’s title is a play on the Follies song “I’m Still Here” which Stritch often sung at concerts and events. While commemorating Stritch’s achievements, Jacobs definitely doesn’t hold back in imparting her horrendous excesses, though her affection is palpable.

Even at 83, when she could have been at the Carlyle toting up residuals, she would be gamely schlepping into Brooklyn and popping out of a garbage can in Samuel Beckett’s Endgame.

Still Here: The Madcap, Nervy, Singular Life of Elaine Stritch, with its propulsive blend of biography, oral history and psychological examination will likely stand as the definitive account of its subject and should enthrall her admirers by its well-rounded portraiture.

Published by Farrar, Straus and Giroux