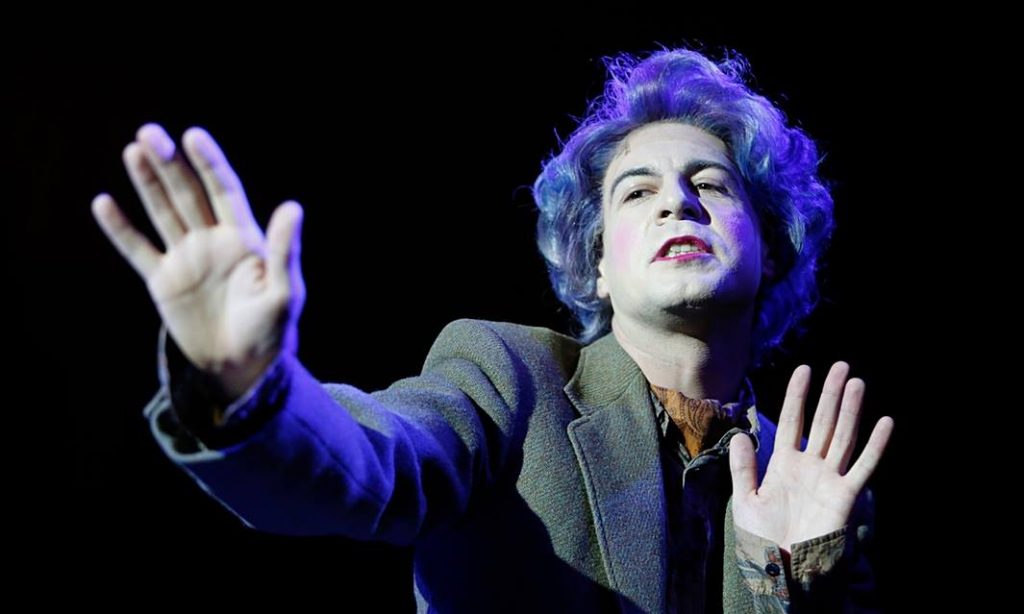 Mark Farrelly in a previous production of Naked Hope.

“After the first four years the dirt doesn’t get any worse,” “My childhood ambition was to be a chronic invalid” and “You Know Who” are from among the hallowed hit parade of monumental quotations that the dynamic young British actor Mark Farrelly grandly proclaimed during his glorious self-written solo show, Quentin Crisp: Naked Hope. It debuted in the United Kingdom in 2014 to great acclaim and has since been performed internationally. This one night presentation at Feinstein’s/54 Below was its U.S. premiere.

Bewigged in Crisp’s signature swirling coif, clad in tan trousers, sandals and a untucked forestial geometric print shirt, the lean and animated Mr. Farrelly offered an impeccable recreation rather than an impersonation of that 20th century icon circa 1968. With his rumbling fluty voice and expressive physicality, Farrelly faithfully channeled the legend’s persona, at one point holding a tea-cup with tremendous flair. It was a sensational performance that should have totally fulfilled Crisp aficionados’ expectations and intrigued those unfamiliar with him.

In its initial 60 minutes, Farrelly’s shrewd treatment which is derived from Crisp’s own words creatively distills The Naked Civil Servant’s key events with picaresque élan, confidently eschewing laborious exposition. It’s assumed that we know all about Crisp and if we don’t, we’ll enthusiastically go along anyway and look him up later. Farrelly’s bold conceit for a solo show is that there is no conceit. There is no framing device such as that we’re witnessing a lecture or that we are at Crisp’s London bedsit or in his New York City hovel. It’s an entrancing disembodied take that starkly places Crisp in the cosmos. 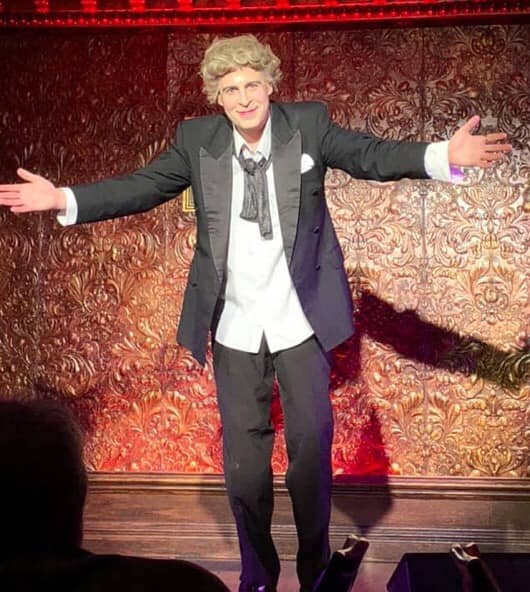 Mark Farrelly at Feinstein’s/54 Below.

Having distinguished herself in numerous works by British stage titan Steven Berkoff and being a compatriot of his, celebrated actress and director Linda Marlowe brings a dazzling sense of theatricality to Quentin Crisp: Naked Hope with her artful staging. There’s just a chair onstage but Ms. Marlowe conjures up a series of arresting stage pictures and tableaux in concert with dramatic lighting and choice bits of evocative music and sound effects. Marlowe has Farrelly on his knees, arms out stretched to boldly visualize a degrading rent boy escapade. It’s among several of her presentational flourishes along with a haunting slow motion sequence of violence.