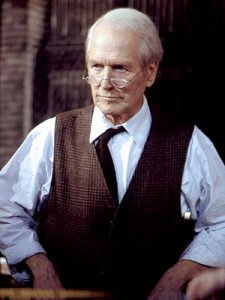 Recently on one of the NYC Subway Art Tours that I conduct (www.nycsubwaytour.com), the only attendees were 86 year-old Cynthia Wallace from  Westport, Connecticut, and her younger cousin Marsha, who was visiting from San Francisco, California.

Halfway through the tour, I mentioned that I had been to Westport twice, each time to see Paul Newman in a play at The Westport Country Playhouse. The first time was in the summer of 2000. It was a major event, as Mr. Newman hadn’t appeared onstage in over 35 years. This was a reading of A. R. Gurney’s family drama Ancestral Voices that starred him and his wife, Joanne Woodward.

I told Cynthia and Marsha that two years later, my friend Kathy Fountain and I returned to Westport when Newman starred as The Stage Manager in Thornton Wilder’s Pulitzer Prize winning classic, Our Town, directed by James Naughton.

“Oh, Cynthia was in that,” said Marsha.

So, throughout the rest of the tour when we were waiting for and riding on subway trains, the vibrant and spry Ms. Wallace recounted the story of how she made her Broadway debut at the age of 72.

Ms. Wallace, a long-time Westport resident, had been volunteering during the summer of 2002 at the camp Newman founded for children with cancer, The Hole In The Wall Gang Camp.

During a gala at the campsite in Ashford, Ct. she was working backstage and chatting with the theater’s artistic director Anne Keefe. Cynthia mentioned that she had been taking acting classes, now that she had spare time. She had also acted now and then in community theater over the years. Ms. Keefe remembered that conversation. Several months later, she called to ask Cynthia if she were interested in auditioning for a small role in Our Town. She was, and a few days later was notified that she had gotten the small part of the Woman in the Auditorium. 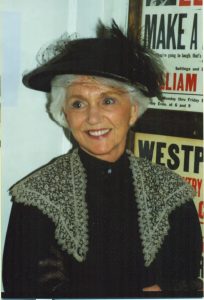 Cynthia Wallace as Woman in the Auditorium

Near the end of the three-week run, Newman gathered the cast together and announced, “We’re working on something big. We’re not sure yet but we’ll let you know.” That remark was about transferring the production to Broadway later in the year, which happened. “I figured they would get an experienced New York actress for my part. ‘No Cynthia, we want you!’”

“I didn’t join Actor’s Equity. Everyone was offered it and joined. I was the only one who refused. But I knew I wasn’t going to do anything more in the theater. I just didn’t have the fire in my belly at 72, to want to pound the pavements, and though I had some natural ability I guess, I didn’t have the training and experience. This opportunity was literally a plum that just fell in my lap. I knew realistically it could never be repeated.”

Instead of traveling back to Westport after performances in New York City, she mostly stayed at a friend’s apartment throughout the eight-week engagement.

“During one performance Newman got mixed up and skipped to the next scene. There was a flurry of confusion back stage, but the director reversed the sequence ( including sound effects) and the audience never knew the difference. The mistake created great energy and adrenaline and the audience felt it. At the final curtain that night, one man in the 3rd row was just beaming! When panic turns into victory it is so sweet.”

“There were memorable celebrities waiting to visit Mr. Newman backstage. His dressing room was just down the hall from mine. So when I opened my door one evening there were Ed Harris and Kate Winslet waiting patiently on line. I was stunned by how beautiful they both were. I was still in costume and they smiled broadly at me! I also saw John Travolta who stood up and cheered for Paul as we took our bows, and Kirk Douglas looked like a kind of fierce lion with his mane of silver hair. There were many more who flocked to see Paul but I’ve forgotten the names by now.”

“When the final bow of that last performance came, the five understudies came on stage carrying hundreds of balloons while the cast led the audience in singing Happy Birthday.
Paul picked up his wife Joanne, spun her around and the whole theatre exploded!”

“I miss him. We all miss him. He did so much for our world.” 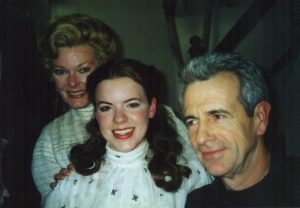