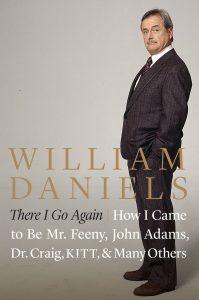 You need to somehow get into a play, be seen in it, remembered for your performance, and be seen by a person (an author or director or producer) who just happens to have a play or film or TV series that he thinks you’d be perfect in. At least that’s how my career seems to have progressed.

That’s just one of the numerous, insightful observations William Daniels offers in his captivating memoir, There I Go Again. Mr. Daniels’ admirers, devotees of theatrical autobiographies and those interested in the craft of acting will be enthralled by it.

“Although I’ve had a long career, it irks me that some people in show business don’t equate that longevity with success. For that crowd only stardom equals success.”

In 200 lean, informative and precise pages, Mr. Daniels candidly recounts his remarkable life on stage and off, with great depth. He also imparts pragmatic advice such as, many times because of unskilled directors, actors are essentially on their own, and how to work under such conditions.

“…it’s a trap for actors to emphasize what is already there; what the actor must do is to find the character’s human attributes other than what is written.” This belief has infused his many memorable roles on stage, screen and television for over 60 years with inimitable vividness. An example of this is in the film The Parallax View, where he decides to play his character as being gay, though this isn’t in the script.

He initially wrote the book by hand on yellow legal pads, and his nearly 90 year-old, distinctive voice forcefully comes across. There are many revealing behind the scenes of show business anecdotes, as well as frank personal disclosures.

Finely etched, positive portraits of celebrities that he has worked with or encountered during his long life are wonderfully rendered. Bill “Bojangles” Robinson, Walter Huston, Gertrude Berg, Leo G. Carroll, Lauren Bacall, Marylyn Monroe, Barbara Harris, Howard Da Silva, James Garner and Warren Beatty with whom he appeared in The Parallax View and Reds, are singled out.

Though not really gossipy, the behavioral excesses of Jerome Robbins, Jason Robards, Jo Van Fleet, Sandy Dennis, and Herbert Berghof are documented. Kirk Douglas throws around his stardom during the Broadway production of One Flew Over The Cuckoo’s Nest, but redeems himself years later.

Daniels was born in Brooklyn, in 1927. His amiable father was a bricklayer and his mother was a telephone operator. At the age of 3, he was observed dancing to music playing on the radio. His mother Irene had the brainstorm that he should be in show business. She soon became an active stage mother, and he and his two younger sisters were coerced into a singing and tap dancing act in various venues, on radio and on early television.

Undergoing therapy decades afterward, it was concluded that he was a victim of abuse based on his mother’s controlling ways, her emotional distance and his disrupted childhood. She was living her fantasies of being a performer through her children. Over time he forgave her, and the book’s dedication is, “For Irene.” He grew closer to his father in their later years.

This all impacted his personality in injurious ways. He confesses to being overly analytical and turning down many opportunities for critical reasons, and having to be talked into doing many of the works that were landmarks in his career. There was also the recurrent belief that he was forced into performing, and didn’t really want to be in the profession. This manifested itself with being uncomfortable taking bows at the end of a performance.

At 15, without any acting training, he is cast in a touring company of the hit Broadway play, Life with Father. His hair is dyed red to match the character’s. The play’s author and star, Howard Lindsay becomes a significant mentor.

“Mr. Lindsay, I think, was the greatest male influence on my life. It’s because of him that I have spent my life emulating his stage presence, playing upper class, patrician roles…Life with Father turned out to be life with a kind of “father” indeed.”

After two years in the Army, he attends Northwestern University’s theater program. There he meets, and falls in love with the upper middle class acting student from Illinois, Bonnie Bartlett.

They marry in 1951, and later adopt two sons. It is one of the most renowned and enduring show business marriages in history, lasting to the present. The couple graduates, and head to New York City.

The 1950’s began with them toiling away at a series of grueling, odd jobs. Bartlett eventually is gainfully employed on a television soap opera. Daniels is accepted into The Actor’s Studio. “I know that Lee Strasberg made me a better actor than I ever would have been without him.”

“In 1959, I got my first big break in New York. I was not impressed with the play. It seemed wordy and out of balance. It wasn’t the first play I misjudged and it wouldn’t be the last.”

The Zoo Story, a one-act, two-character play, was Edward Albee’s first work for the theater, and launched his career with its fabled Off-Broadway premiere at the Provincetown Playhouse. Daniels’ performance as the uptight, middle-class Peter got him an agent, a Village Voice Obie, and The Clarence Derwent Award. That came with a $500 check, when his salary was $75 a week. His two years spent in the play took him to Buenos Aires, where he was named “El Actor de habla no Castellana”—Best Actor in a non-Castilian speaking role.

In between acting roles, he became an assistant director to Jerome Robbins, and there are fascinating stories about the creation of Gypsy, as well as other productions Robbins directed.

He repeats his supporting role in the hit Broadway comedy A Thousand Clowns in the chaotically produced film version of it, that’s released in 1965. This leads to movie parts in Two for The Road, and as the 10 years younger Dustin Hoffman’s father in The Graduate.

“Bill, it’s as if this part was written for you,” his wife observes of John Adams in the musical 1776. He is reluctant to audition for it due to his lack of belief in the material, and the large amount of singing and stage time. In 1969, he is cast in it, and it’s one of the signature roles of his career. He stays in the show for over two years and recreates his legendary performance in the 1972 film version.

To unwind after performances, he takes up playing the guitar. He is also aware that his drinking is becoming a problem, especially after missing a performance because of it. He describes the trajectory of his increasing drinking and then self consciously limiting it. “I’ve never chosen to go into treatment or anything like that, and I still enjoy a good glass of wine or two.”

His next, and last Broadway appearance is a six-month run as a replacement for Len Cariou, in A Little Night Music in 1974. By then, Daniels has relocated to California. Apart from a later stint in Love Letters with his wife, he is never tempted to appear on the stage again, despite several major offers including one from Bob Fosse to be in Chicago.

Much of the 1970’s were spent eking out a living on episodic television. There is a humiliating appearance as a clown in the sci-fi series Battlestar Galactica, and roles on McMillan and Wife, Quincy M.E, The Rockford Files and McCloud.

His profile among those in the television industry rises, and he is offered the role of Dr. Mark Craig on St. Elsewhere. He grudgingly accepts because it’s not very substantial part, and goes on to win two Emmys for Best Actor in a Drama. Bonnie Bartlett later appears as his wife, and wins two Emmys as Best Actress in a Supporting Role in a Drama.

With his high visibility he is elected President of the Screen Actors Guild, and during his one two-year term, presides over a contentious but advantageous strike.

Recording the voice of a car for Knight Rider, was another opportunity he originally balked at. He becomes part of a cult classic that he never watched.

He is reluctant to take the part of the middle school teacher, Mr. Feeny on the situation comedy Boy Meets World. He does, and over seven seasons became enduringly popular with young audiences.

“The idea of working again actually makes me happy. It’s only taken eighty plus years to get to this point…I’m an actor—a very good one—and I am happy to know that I wound up where I evidently belonged.”

On March 2, 2017, Mr. Daniels appeared at The Strand Book Store in New York City, to sign his memoir. Several hundred people waited outside on line during that wintery night to meet him with their copies of it. 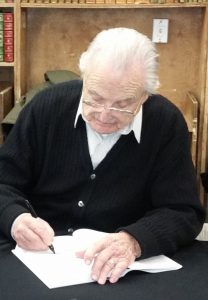 There I Go Again by William Daniels

Published by Potomac Books, Inc., an imprint of the University of Nebraska Press, hardcover $26.95 (207 pages)

For information and to purchase, visit