With the countenance of a vintage stuffed owl and that of a Friar’s Club Buddha, and wearing a cranberry blazer, JOE FRANKLIN sat through the penultimate performance of The Haunted Side Show at The Laugh Factory. Except for a woman in the cast playing an audience plant he was alone, which added even more absurdity to this surrealistic spectacle. 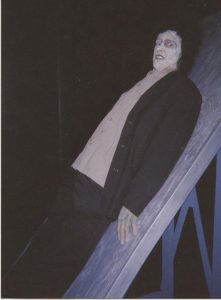 Me as Frankenstein’s Monster.

Often peeking thorough the curtain I was transfixed as he stared impassively NEVER laughing or reacting during the show. At first the chronic puffing up of his chest seemed like a reaction, but it was just a natural tic. He did not even respond to my tributary adlibs.

As The Monster I howled “Martin Paint!” and on my line to Coffina, “You doctor?” I improvised, “You Dr. Brown?” She was rattled, “Who is Dr. Brown?” OF COURSE those were long time sponsors of Joe Franklin’s legendary Channel 9 local talk show that spanned the eras from Eddie Cantor to Carrot Top.

My Yiddishisms as The Witch Doctor also were met with silence. Following the zombie finale where the undead threaten to leave the stage to eat the audience’s brains, the curtain came down and rose for the cast to take their bows.

He BOLTED. There was to be no backstage congratulatory visit from this venerated show business legend. Earlier, he was griping to the audience plant. “Are you going to the stand up show downstairs at 8:30 too? It’s 8:15 already!”

His renowned warren of an office crammed with ancient LPs and historical performing arts memorabilia was in the building adjacent to The Laugh Factory. Pam ran into him several times during our residency, imploring him to come see our show. It’s close proximity and his always being on the lookout for new talent must have led him to keep his word. His presence made this performance the supreme highlight of this theatrical folly.

If it had been the last performance it would have been fitting. Instead, that was for three friends of a cast member who caused a ruckus at the box office when they learned they would be compelled to buy two drinks in addition to the $20 cover.

This is an excerpt from my story, I Am a Pumpkin. To read it in its entirety, please visit http://www.darrylreilly.com