“She creeps me out!” quipped Hedda Lettuce upon the appearance of wild-eyed Eve Harrington wearing her trench coat and funny hat. When Margo Channing roared, “Fasten your seatbelts, it’s going to be a bumpy night!” the sold out audience erupted with thunderous applause at the Cinépolis Chelsea cinema. 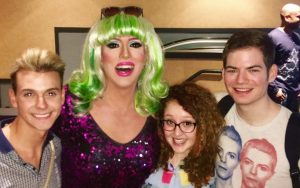 Hedda Lettuce and audience members at the Cinépolis Chelsea.

“The Queen of Green” is the sobriquet of the supreme drag artiste Hedda Lettuce. Ms. Lettuce has been entertaining audiences without lip-synching for 25 years, at venues in New York City and during an annual residency at Cherry Grove’s Island Breeze bar on Fire Island. In addition to her live appearances she has been seen on television and in movies such as Sex and the City and To Wong Foo Thanks for Everything, Julie Newmar.

Most notably she has hosted the very popular interactive Hedda Presents the Classics at this Chelsea movie theater on Thursday evenings for 15 years. The eclectic selection of campy movies screened have included the works of John Waters and Alfred Hitchcock, Hollywood musicals, disaster movies, Madonna’s oeuvre, to even more offbeat picks such as Looking for Mr. Goodbar. Mommie Dearest, Auntie Mame and Showgirls are perennials, as is All About Eve, and that was festively presented on September 22, 2016.

Her face exquisitely made up and wearing a dark, shimmering multi-colored sequined gown, high heels and her trademark verdant wig, Lettuce raucously held forth mostly while sitting in a director’s chair for 45 minutes. Her unique honeyed voice simultaneously recalls the cadences of iconic divas such as Tallulah Bankhead, Mae West, Katharine Hepburn, Rosalind Russell, and Barbara Stanwyck. Her comic timing is superb.

The pre-show was spent telling mildly risqué jokes and quick-witted bantering with the audience. Those who had seen it more than 15 times were asked to recite their favorite portions of dialogue. “Bill’s thirty-two. He looks thirty-two. He looked it five years ago, he’ll look it twenty years from now. I hate men,” was marvelously delivered.

Those who had never seen it were good-naturedly ribbed. A straight, 31 year-old real estate broker was told that he would become gay afterward watching it. A young gay man explained that he saw the screening listed on Fandango and thought it would be “like a Turner Classic Movies event,” and got playfully roasted for his ignorance.

The finale was a raffle including gag prizes such as T-shirts and coloring books for the upcoming Tom Hanks potboiler, Inferno, as well as tickets to an Off-Broadway play. The grand prize was a bottle of Boy Butter personal lubricant. This elicited a barrage of earthy observations from Ms. Lettuce.

Then it was time for All About Eve. Projected on a full-sized theater screen, in the proper aspect ratio and in ravishing black and white, writer-director Joseph L. Mankiewicz’s 1950 masterpiece about life in the Broadway theater was immensely pleasurable under these optimum and communal conditions. Bette Davis’ and the legendary casts electric performances were a joy to experience once again.

As is the format for these productions, Lettuce sat in the audience with a microphone and delivered pithy comments as the film played. With her laser pointer she occasionally focused on areas of interest such as various costumes. No doubt so as not to distract from the monumental eloquence of the screenplay, her remarks were strategically sparing but always hilarious. “Where’s the pie to hit her in the face?” was a reaction to another of Eve’s machinations.

Adhering to drag queen tradition, when the movie was over a minion of Hedda Lettuce’s was in the lobby with a bucket to collect tips for her. As admission only cost $10, this was not an unreasonable request considering the high volume of delightful live and cinematic entertainment that the evening contained.