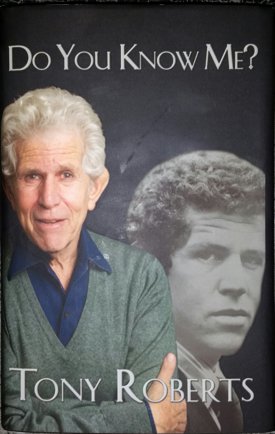 Tony Roberts’ “Do You Know Me?” book jacket

A good audition is one in which the actor finds a way to bring some real piece of himself to the proceedings. The lines don’t matter. Those doing the hiring have heard the lines before. What they need is a human being of flesh and blood to play the part.


That advice is among the numerous practical insights and observations Tony Roberts offers in his breezy memoir Do You Know Me? Since 1961, Mr. Roberts has appeared in 23 Broadway plays and musicals and was nominated twice for Tony Awards. Annie Hall was the most prominent of the six Woody Allen films he was featured in. A regular role in a soap opera, a guest shot on The Love Boat, seven pilots and one cancelled show, are among the highlights of his television career.

His book is a wonderful chronicle of the ups and downs of the life of a working actor who never attained stardom. “My career never stopped dead in its tracks as I got older, because I had diversified my ambitions to such an extent that there was always something within my grasp. It might be a voice-over commercial, a chance to do a classic in regional theater, a performance at a benefit, or even a chance to direct something…”

Roberts was born in 1939, on The Upper East Side of Manhattan to a Jewish family. His mother Ruth worked as a secretary for the animator Max Fleischer. His father Ken was a well-known and successful radio announcer. “We weren’t rich, but “upper middle-class” as my father would describe us.”

During childhood he became drawn to acting and appeared in plays at summer camp and at elementary school. In the 1950’s he took acting classes at HB Studio and despite reservations from his parents about the precariousness of the profession, went on to Northwestern University to pursue his studies. There he encountered the renowned teacher Alvina Krause who became an inspiration and mentor. “Her great achievement was that she had the ability to expand horizons, to bring people to a sense of their own potential, to create a vision of what the theater can be, but generally isn’t. Some thought she trained us for a theater that doesn’t exist.”

After graduation there were a few years of summer stock, a soap opera stint for a year, being fired from a television pilot, two flop Broadway plays and then a fateful event at the age of 25. He was hired to be the understudy to the understudy to the star Robert Redford who was going on vacation from the smash hit Broadway production of Barefoot in The Park. He watched the show’s team play in a Broadway Show League softball game:

The understudy came up to bat and smacked the ball to the outfield for what looked like an easy single. As he rounded first, he saw a chance to stretch it into a double and headed full-speed for second base. He and the ball arrived at the same time and suddenly he was writhing in pain and holding his ankle. His teammates rushed to attend him, but I just sat there. Could this be happening? Could this actor’s bad break be my big break?

Tony Roberts as he appeared at the Drama Book Shop on December 15, 2015 (Photo credit: Darryl Reilly)

It was. Due to that actor’s injury he was hired to replace Redford during his vacation and then when he later left the show. That brought him to the attention of Woody Allen who cast him in his Broadway comedy Don’t Drink The Water and was the beginning of their beautiful friendship. That play’s legendary producer David Merrick later cast him in four other Broadway shows.

“I was trying to choose the best projects available to advance my career and the options varied. More often than not, they were merely a chance to tread water.” Over time treading water included a low-budget horror movie shot in Jamaica and being a replacement in several Broadway shows and touring. A high point of his later career was his awesome performance as the blind Hamm in Samuel Beckett’s Endgame at Off-Broadway’s Irish Repertory Theatre in 2005.

Strategically absent from the book are in-depth personal details or “score-settling.” One marriage and one divorce, a child, his sister, financial troubles, and health woes are mentioned often briefly.

Though Tony Roberts’ background was privileged and he entered show business in a different era, Do You Know Me? has a universality that all aspiring actors could relate to and anyone else could enjoy the book’s entertaining combination of wryness, idealism and humor.

“I don’t believe my love affair with acting is any different from that of my peers. This is the conclusion I’ve arrived at after several decades in the business.”

On December 15, 2015, Tony Roberts appeared at an event at The Drama Book Shop in New York City to promote Do You Know Me? He read from the book, took questions from the audience and did a signing of it. His animated, charming and droll presence and highly expressive voice amply demonstrated why he has had such a prolific career in the performing arts for 55 years.