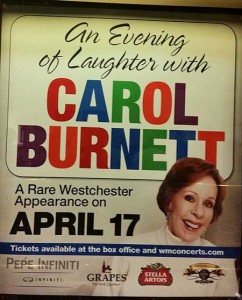 “The most embarrassing question I was ever asked? Did I have a sex change. That takes the cake!”

Carol Burnett was in White Plains, on Friday April 17, 2015, to perform her show, An Evening of Laughter with Carol Burnett. Sadly there was not much laughter or much time together.

Having a capacity of 3750, The Westchester County Center is used for functions including basketball games, wrestling events, and concerts. We arrived there at 8:05, for the 8:00 PM show, due to parking issues. The packed, $10 per vehicle, municipal lot, was quite a distance away from the venue, plus there was a lot of traffic for the adjacent expressway.

The venue was packed with Ms. Burnett’s many fans. At 8:15 the lights darkened, a large screen was lowered, and video clips were played from The Carol Burnett Show. A montage of Tarzan yells, Tim Conway as a dentist cracking up Harvey Korman as a patient, Mrs. Miller grousing in the audience about wanting a better seat, Scarlett O’Hara wearing the curtain rod dress. For 10 minutes, with muddled sound, the audience was treated to these highlights, and the screen went dark and was raised.

Carol Burnett entered to tremendous applause. She was resplendent in a pink dress, and a glittering silver sequined tunic. Besides being stylish, her outfit was strategic as many of us were so far away and these vibrant colors along with her timeless red hair, aided considerably in proving that she was there. She explained about how her body microphone was positioned on her body. This was problematic, as due to feedback, wavering volume, and static, it was difficult to hear her. Despite this inept technical situation, it still allowed us to hear that she sounded the same as we remembered her.

After these brief remarks, she called for the lights to be, “bumped up.” For the next thirty minutes she took questions from the audience, as she used to do at the beginning of her television series. Standing at first, and then sitting in a chair that was brought out. She was wished a happy upcoming birthday, asked about Once Upon a Mattress, what her favorite Bob Mackie outfit was, and was inspired to tell a lengthy story about meeting Lady Bird Johnson at The White House, with Julie Andrews. The sound system for the audience was perfect, which contrasted with her often inaudible responses.

I wanted to ask her about the filming of Annie, and to hear her impressions of its director, John Huston. This proved to be futile. As it appeared that she was only calling on people in the first section. I marched from the rear to the back of the gated front section that was guarded by the venue’s employees. They were not helpful about my inquiry about the procedure for asking a question. I went to the other side that was not gated and again inquired. I was told to go back to the rear area that had a line of people to ask questions. There were a few people standing there.

“How can I ask a question?” I asked someone who seemed to be an official who had a hand held microphone.

“She has to call on you and an usher will give you a microphone.”

“I know that but she’s only calling on people in the front.”

“No, she’s calling on people in all areas.” She then left and went past the gate into the front section and never returned. At one point Burnett did point up to the balcony, but due to sound problems, she couldn’t hear the question, and so she continued picking only on those in front.

“We can’t hear you!” Audience members after 15 polite minutes began to shout. There was no improvement. Eventually the lights darkened, the screen came down and more faded clips were shown. These focused on presenting Ms. Burnett with prominent entertainers during the 1967-1978 run of her television series. Ethel Merman, Perry Como, Steve Lawrence, Bing Crosby, Ray Charles, Peter Sellers, Jim Nabors, Rita Hayworth, Ella Fitzgerald, and Lucille Ball were included. Just as a clip of her and Vicki Lawrence, doing a spoof of The Pointer Sisters began playing, my sister returned holding a piece of paper.

“Come on! We’re going! We’re getting a refund!” Exclaimed my sister. During the question session, she had left to go to the lobby to complain about the poor sound, as many in the audience were doing. By leaving now, after 45 minutes, the venue’s management offered full refunds. As the price of the tickets for our party of four was over $300, this was a welcome solution. The lobby was crowded with irate attendees.

Even if the sound were ideal, the show would still have been a great disappointment. It was odd that given Carol Burnett’s theatrical background and enduring career, that showing old television clips and taking questions only from the premium seated audience members, was what she deemed was enough of a program.

Nearly 82, she remains vital and capable of more. An opening autobiographical sequence based on her well-documented difficult early years, and personal and professional ups and downs, with a few songs associated with her career, combined with some clips and questions, would have been ideal. Instead, she put forth a lackluster evening designed as a minor stroll down memory lane.

Carol Burnett is performing this show on several dates in the Tri-State area and tickets and information are available at http://www.ticketmaster.com

3 Comments on Not Glad We Had This Time Together