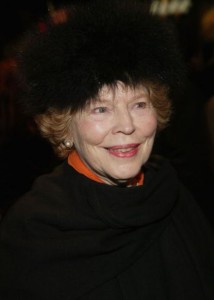 “I’m Anne Jackson, I’m a great actress and I’m pushing a shopping cart with Lestoil and chicken breasts through Gristede’s!”

That was one of many funny outbursts Anne Jackson made that I recall from during the time I studied acting with her at HB Studio. She was joking about the contrast between her illustrious career and everyday life. Her death at the age of 90 on April 12, 2016, sparked many memories.

“I made Anne Jackson laugh!” was the euphoric finale to my story of auditioning to get into her scene study class in the early 1990’s. She sat at a small wooden desk in one of the creaky classrooms of the Bank Street building with her red hair and beaming face.

I performed my piece from Feydeau’s short farce, “Wooed and Viewed,” as a stuffy businessman and near the end I pulled out a concealed frilly maid’s apron and put it on. Hearing her laugh was tremendously uplifting and even more so was later learning that I had been accepted.

After studying with other teachers I was intrigued with taking classes with her as she was not only a working actress but was one I was quite familiar with. Her marriage to and performances with Eli Wallach were legendary. Her prolific career began in the 1940’s and included numerous stage, screen and television appearances. Most vivid was her small sympathetic role in Stanley Kubrick’s The Shining as the troubled child’s psychologist and I had seen her and Wallach in the Broadway revival of Café Crown.

“Oh stop it! You wouldn’t really pour tea like that!” she bellowed during a scene. The young woman performing was indeed being too actressy. That was characteristic of her style. She would interrupt when needed and even gallop up on stage to demonstrate how she thought something should be done as she had the authority to do so.

In the course of her lively critiques, instructional and inspirational anecdotes often involving one of those titans she had a personal history with were shared. She truly was a vessel to The Golden Age of American Theater and anyone who studied with her was enriched by that experience. There were additional tales of her husband and her children that were also insightful. Everything she said was delivered in a warm voice and with intense eye contact.

“You’re offbeat and that’s great but that can be a problem,” was her shrewd, kind and accurate summation of my work over the course of the year I attended her classes.

She was supportive, nurturing and critical when needed but never mean spirited as some other teachers at HB were. Comedic scenes were her specialty and it was like being directed by an old-time pro on how to get a laugh in the context of the material. She was equally adept at analyzing dramatic scenes without pretentious acting school clichés. Vibrant reality was what she extolled.

“Those are golden moments!” she declared when something went wrong and someone wanted to stop and start over. The reality of really acting in front of an audience was a key and vital lesson she imparted.

“You have the soul of a clown,” was the most memorable and treasured compliment she said to me.