“Speak up! Don’t look at the floor! When you’re onstage I want to see your talent not your training!” were among the sharp comments that Aaron Frankel bellowed at students as they performed during his acting class. “Do you think you’re worth $40?” That was the top price of a Broadway play at the time.

It was in the late 1980’s at HB Studio where I attended the most influential class that I’ve ever taken and experienced the greatest teacher that I have encountered. 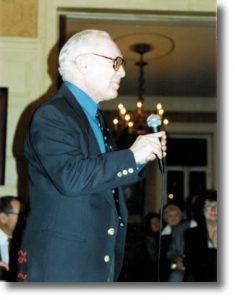 A recent New York Post article (http://nypost.com/2016/08/03/these-old-school-new-yorkers-have-lived-in-the-same-homes-for-50-years/) triggered memories of my time with Mr. Frankel. At the age of 95, he is one of several New Yorkers portrayed in this feature story about long-time residents of rent-controlled New York City apartments. It was wonderful to learn that he is still around and remains articulate and entertaining.

Besides his acting classes at HB Studio he taught Theatre Arts at Columbia University and playwriting at The New School. His analytical book Writing The Broadway Musical is highly regarded.

“Auditioning: Monologues and Cold Readings” was the name of this monumental class. It went beyond its stated purpose of honing audition skills. It was actually a course in what a life in the theater truly meant.

He believed in typecasting. We should find our type. Leading man. Leading lady.  Juvenile. Ingénue. Character actor. We should select material and go for roles that we could play right now based on our type. “You can stretch yourself later on when you’re a big star.”

Three students in succession would perform a monologue or three duos that earlier received material and briefly prepared would perform. Then they would all then sit in front of the class onstage. Each member of the class would then verbally vote on whether to call them back or reject them based on their performance. There were choruses of variations of “Reject. Reject. Callback” “I’d reject all of them!” Frankel would often proclaim and then give his reasons why.

This was all a heretical contrast to the common practice of having the classroom be a “safe space” to explore and experiment. With Frankel it was a battlefield on which to learn to be marketable as an actor.

His delightful personality, lack of malice, absence of favoritism, tremendous knowledge and experience infused his observations with solid objectivity and constructiveness.

Another of his heresies was not turning the class light on. Near the door was a switch that when flipped lit a small red blub outside. That indicated a class was in session and for latecomers or anyone else to wait until after it was turned off to enter, so as not to interrupt students who were performing.

“The world does not come to halt just because you’re acting! You’re going to be auditioning in offices and the phone may ring or an assistant will to come in. You’ll be onstage auditioning and they’ll be talking to each other or their lunch will arrive. People arrive late to the theaters and the show doesn’t stop. Get used to it!”

Invariably dressed in a turtleneck, trousers, a blazer and tennis shoes, he was then in his mid-sixties with crew cut white hair and eyeglasses. He looked like an acting teacher from central casting. Professorial yet impish, he spoke in a plummy voice with expert Borscht Belt timing and his eyes always twinkled.

His sometimes-stinging remarks were good-natured, insightful and could be very funny. They were all imparted for our benefit to be realistic about ourselves. We were encouraged to bring in our headshots for him to critique.

“Well, if the Yiddish Theatre ever makes a comeback this picture would be perfect!” He said of a young woman’s who had a prominent nose. “This would be great if they’re casting a road company of The Boys in The Band!” Was his assessment of a young man’s. After these jocularly harsh statements he then offered more detailed feedback.

‘I’m 33,” said one of the male students during a discussion of his work. “No! Never tell your age! You look like you’re in your early 20’s. Always let them think you’re younger then you are.”

Though stressing the business aspects of the theater, Frankel was also concerned with actual acting. He didn’t espouse any particular method or theory but guided students with practicality. He could pinpoint what physically had to be improved and inspire students to work on what inner qualities needed refining with his perceptive comments.

“See as many Broadway shows as possible. You’ll learn from and be inspired by great performers.” In that era he had high praise for The Petition, a two-character British work that starred Hume Cronyn and Jessica Tandy in their last Broadway appearances. The Mike Nichols directed production Social Security starring Marlo Thomas, Ron Silver, Olympia Dukakis was cited as a great example of a stage comedy.

His forte was comedy and he also taught another class, “Comedy Scene Study.” There he would assign scenes from enduring comical works such as those by Neil Simon. He would analyze these with gusto, adding physical business and pacing to what the students prepared.

An older gentleman and I were assigned a scene from the dinner theater staple, Norman, Is That You? That’s where hijinks ensue when a father visits his gay son who is still concealing this matter. Frankel added all sorts of staging and acting suggestions that improved the scene immensely.

“I can always see that you’re a very good actor playing a character but I also always see DARRYL REILLY because you have such a strong presence,” was his kind take on me.

“Don’t make this school your haven,” was his advice to us. “You’ll learn more about acting by being in  plays then by perpetually taking classes.”

To make that happen not only should we scour Backstage, Show Business and The Ross Reports, we should “make the rounds.” That meant actually going to casting offices to ask if they were casting anything or to drop off our headshots even if they specified “Do not visit.” “They’re not going arrest you. You might get seen by someone who can give you a job.”

Most of us were young and not in Actor’s Equity. Still, we should go to the Actor’s Equity offices if there was a part we were right for, sign the non-union list and maybe we’d get to audition at the end of the day after all the union members had been seen.

“Make friends with fellow actors for support,” he urged us. “Your other friends and relatives will mean well but they won’t understand what you’re going through. You’re going to feel like banging your head against the wall and screaming because you have talent and you do everything that you’re supposed to do and nothing’s happening…”