This year I became a member of the Drama Desk on the basis of my reviews for TheaterScene.net, and so I saw many more shows than I reviewed. This year’s 10 best list is derived from the 119 presentations I covered and two outstanding productions I did not officially review. As in the past, these selections are all from Off and Off-Off-Broadway venues which is where stimulating and noble theater is to be found in New York City today. These four revivals, five new plays and a solo work were all fascinating and memorable. 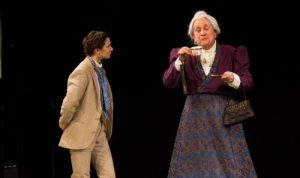 “The Importance of Being Earnest: Two Ways”

From New York Classical Theatre came the best show of the year. The Importance of Being Earnest: Two Ways was Oscar Wilde’s 1895 classic comedy, impeccably performed twice in repertory: one way was conventional, the other by reverse gender, and both were wondrous. Originally staged at A.R.T./New York on a simulated lawn with minimal props and furnishings, it later toured several New York City Parks where admission was free.

Johanna Day was awesome in Joan, as the titular character of playwright Stephen Belber’s mesmerizing memory play comprised of a barrage of brief nonlinear scenes chronicling the eventful life of a complex woman.

The marriage of a young American couple living in Paris grew strained in Company of Fools’ searing revival of Amy Herzog’s unsettling drama Bellville that was intensely performed . 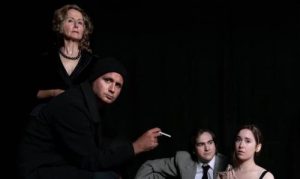 The cast of “The Glass Menagerie.”

Absent usual starry casting and presentational gimmickry, Ruth Stage’s enthralling revival of The Glass Menagerie co-directed by Austin Pendleton and Peter Bloch faithfully evoked Tennessee Williams’ spirit. The film noir-style black and white-accented production design and contained set with a ladder to the side representing that pivotal fire escape, all conjured up the Wingfield’s grim Depression-era St. Louis apartment. Employing a rich trilling Southern accent, the hulky and animatedly veering from comic to melancholic, Matt de Rogatis’ richly detailed characterization of Tom was towering. Sleek, fierce, magnetic and younger than the role is usually cast, Ginger Grace’s Amanda was titanic. Alexandra Rose as Laura and Spencer Scott as Jim O’Connor, “The Gentleman Caller”, each put their own pleasing and distinctive stamps on these treasured parts. After several recent clunky Broadway revivals this treatment was an entrancing joy.

Playwright Claude Solnik and director Joe John Battista’s collaboration, A Life in the Rye was a highly theatrical, well-written and grandly performed biographical fantasia of the life of J.D. Salinger with his younger self as a prominent character. 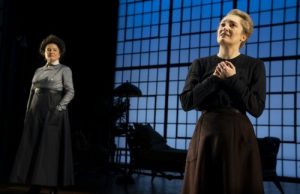 Kate Mulgrew and Francesca Faridany in “The Half-Life of Marie Curie.”

Audible Theater presented playwright Lauren Gunderson’s absorbing two-character historical work, The Half-Life of Marie Curie. It starred the luminous and intense Francesca Faridany as the renowned Polish-French scientist and Kate Mulgrew as her English friend and colleague Hertha Ayrton. Ms. Mulgrew’s grand, feisty and moving performance was one of the year’s highlights.

The Fusion Theatre offered a compelling taut adaptation of Jean-Paul Sartre’s rarely performed classic No Exit, about a trio in Hell that was forcefully performed in a claustrophobic setting and had an operatic prologue.

The Importance of Being Earnest: Two Ways

A Life in the Rye